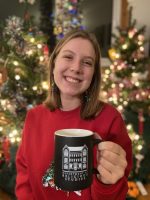 Ciara graduated from Nebraska Wesleyan University in 2021 with a B.A. in Philosophy & Religion and Psychology. In 2019 she was a recipient of the NWU Student-Faculty Collaborative Research Grant, which allowed her to explore pathways for designing a course on “New, Emergent, and Alternative Religions” as part of the U.S. Religious Diversity course at NWU. She has held internships with the Lancaster County Department of Corrections, the Lancaster County Sheriff’s Department, and the Nebraska Department of Correctional Services. Ciara is particularly interested in the way classifications, identity formation, and rhetoric are mobilized in the interaction between law enforcement and New, Emergent, and Alternative religions. She hopes to use her degree from UA to pursue a career in federal law enforcement. 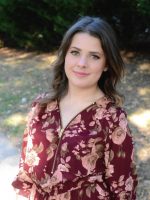 Katie Johnson begins the M.A. program in the Fall of 2021 after graduating from The University of Alabama in May 2021 with a major in Anthropology and minors in Ancient Greek and Latin. She was also part of UA’s Honors College. Katie is originally from Sylvania, Alabama. Her interests include history, archaeology, religion, and the study of myth. Specific research interests include expressions of identity in religion, particularly concerning classical civilization’s impact. She hopes to pursue a career in museums. 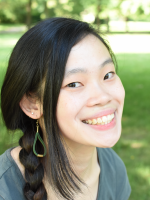 Phoebe Duke-Mosier graduated from Hamilton College in May 2019 with a degree in Religious Studies. Her senior thesis, “Drinking the Kool-Aid: Discourses of Death at Jonestown,” was selected for publication in the Fall 2020 issue of The Journal of Theta Alpha Kappa. After graduation, she joined the court procedures team at Goodwin Procter LLP, a Global 50 law firm. She has broad research interests, including religion’s relationship with popular culture and consumerism, discourses and practices surrounding death, and the intersection between the religious and the paranormal.

Phoebe was selected as UA’s sole recipient of the very prestigious David Francko Graduate Fellowship for 2020 — a fully-funded award for the duration of her M.A. degree at UA. She begins the REL MA in Fall 2021. 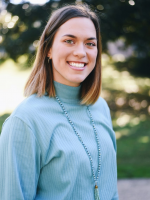 Beginning the M.A. program in the Fall of 2020, Erica Bennett is from Louisiana but has spent the last four year at Millsaps College in Jackson, Mississippi. She will be graduating with a B.A. Honors in May of 2020 with a dual major of Religious Studies/ Sociology and Anthropology, and minors in both Theater and Mathematics. Her Honors  thesis is titled: “Normalizing New Religious Movements: A Deeper Look into the Effects of Social Opinions of New Religious Movements in the Southeastern United States,” which was accepted for presentation at the Macksey National Undergraduate Research Symposium. Erica hopes to continue her research into New Religious Movements and the lives of their followers, possibly leading towards a Ph.D. 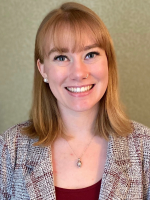 Starting the M.A. in  Fall 2020, Sonya Harwood-Johnson is originally from Grimes, Iowa, and received her B.S. in Anthropology and Religious Studies, with a minor in Environmental Studies, from Iowa State University in May of 2020. Her research has focused on American Esoteric traditions, such as Wicca and the Feminist Reclaiming movement. Her paper, titled “Esoteric Negotiation: An Insider-Outsider Perspective” was accepted to the UMAAR conference in April 2020. Sonya’s longtime interest in working with international students resulted in REL MA internships at UA’s Capstone International office which then led to her being hired, in December 2022, as a full-time staff member at UA, working as an International Program Assistant in its International Student & Scholar Services office. 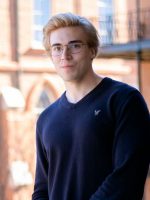 From Highlands Ranch, Colorado, Kyle Ashley is continuing on with the Department after receiving his B.A. in Religious Studies from the University of Alabama in the Fall of 2019. Kyle's interests include imperialism, governmentality, and the intersection between media and power (with a particular focus on American discourses concerning Iran). In Spring 2020 Kyle served as a Teaching Assistant for the Department of American Studies. Visit his website. 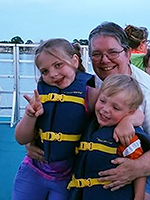 Ana Self Schuber is currently the Program Manager for the New College LifeTrack Program on the UA campus, which assists adult students in the completion of their bachelor’s degree.  Ana has been an instructor for various programs at UA since 1991 and begins the MA in Religious Studies part-time in the Fall of 2018.  She has taught courses in the Folk Arts and Haunted Alabama, and belongs to the Alabama Folklife Association, the West Alabama Quilters Guild and the Alabama Gravestone Society. She received a B.S.E in Theatre/Speech and English from Central Missouri State along with a M.A. in English.  Additionally, she completed a M.A. in Women’s Studies from The University of Alabama.
Department of Religious Studies