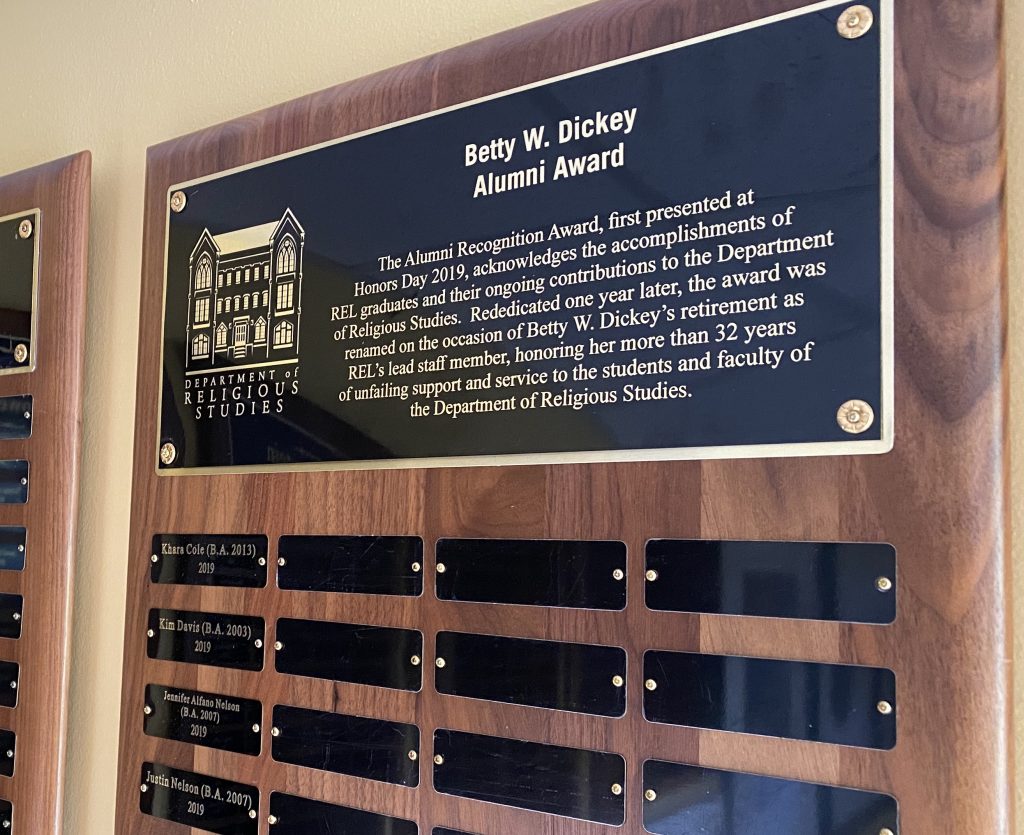 But now is time to make-up for all of that. So, having written to our two recipients, it’s time to let you know who the faculty have selected from this past year’s nominations: we’re very pleased to announce that the 2019-20 recipients of the Dickey Alum Award are Susanna Payton Dunlap and Criag Nutt. 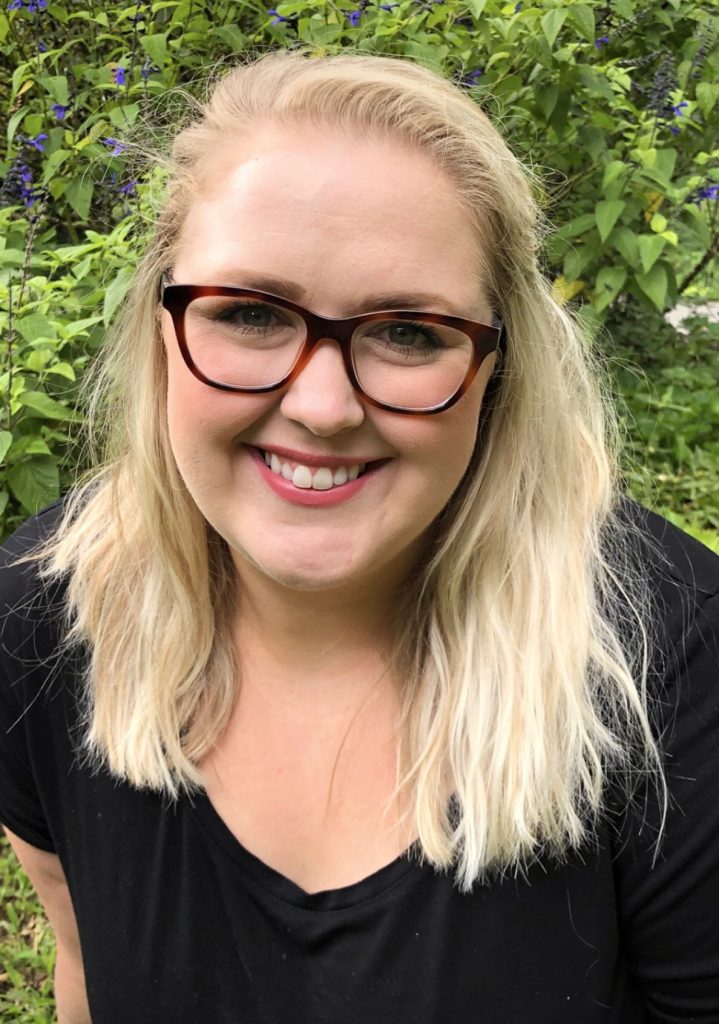 Susanna Payton Dunlap graduated in 2013 from UA with a B.A. in REL and a B.S. in Nursing. After working for several years as a registered nurse in an emergency department she returned to school to earn her M.S.N at Vanderbilt University in 2019, after which she also obtained triple board certification as an Adult-Gerontology Acute Care Nurse Practitioner, Family Nurse Practitioner, and Emergency Nurse Practitioner. Susanna now works as a full-time nurse practitioner in two North Alabama emergency departments as well as a Fever & Flu Clinic; soon, she will be rejoining Vanderbilt University as an adjunct faculty member with their School of Nursing, working as an instructor in their ultrasound course but with aspirations eventually to obtain a doctoral degree.

Susanna reflects on her time in the Department of Religious Studies:

While my REL studies jargon is somewhat dusty, the themes and topics I learned about certainly remain relevant and ever-developing. My REL training and degree provided a sturdy foundation for developing critical thinking skills, especially in the form of appraising literature and research for usability and reliability, or, for instance, navigating the unique cultural/religious/sexual/etc., nuances of a sensitive health encounter. Understanding patients, or making my best attempt, and very quickly establishing a trusting relationship with patients is paramount in the emergency department.

REL prepared me to understand the behaviors that help establish certain relationships and their limitations (especially in healthcare, the relationships that challenge authority and autonomy, such as provider-to-patient), and recognize how self-proclaimed or socially-assigned religious/cultural/racial/gender identity (even stereotypes) impact a person’s relationship with their healthcare provider, their health, their access to healthcare, and their healthcare outcomes. As Steven Ramey and Sierra Lawson explored in 2018, nursing education has a lot of work to do exploring these spaces, and I’m happy to report that my REL preparation gave me a head start in adjusting to those vacancies/shortcomings in my nursing education.

I could go on and on and in more detail, so I hope this scrapes the surface about just how important and useful REL has been to me in becoming an effective healthcare provider. 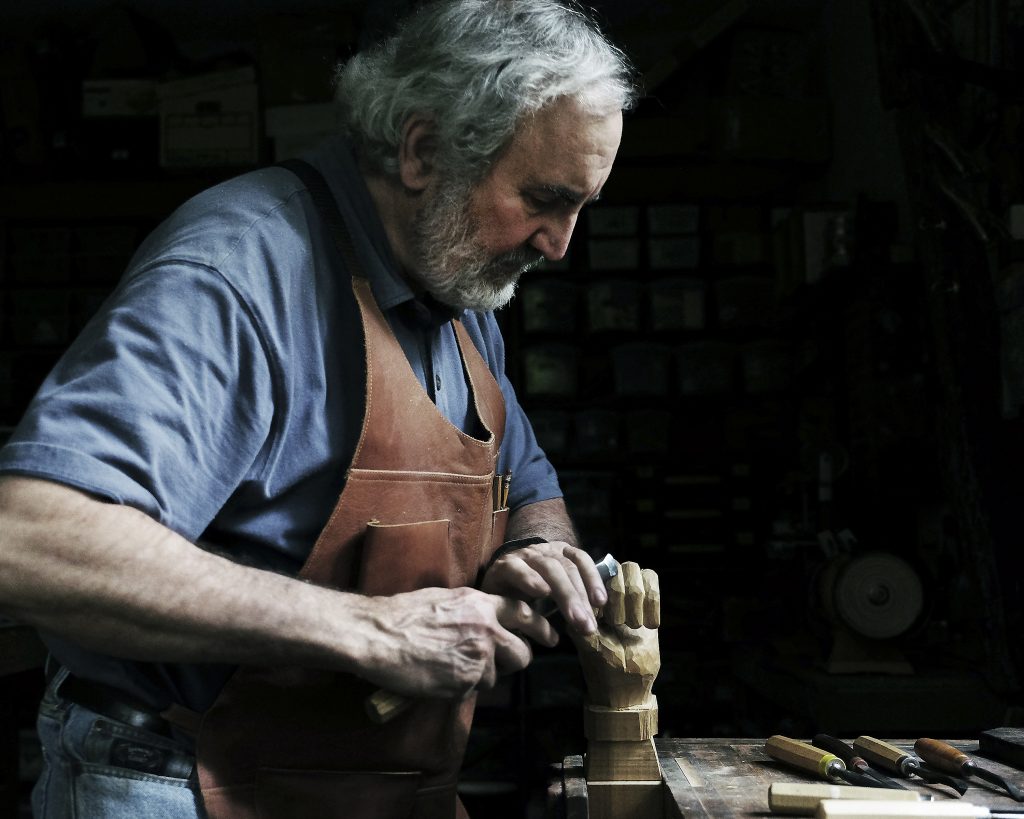 Craig Nutt earned his B.A. at UA in Religious Studies in 1972, and, after first learning the craft of furniture restoration, he went on to establish himself as a nationally-recognized studio furniture maker and sculptor whose work has a place in many of the nation’s art collections, including the Smithsonian’s American Art Museum, the High Museum of Art, the Tennessee State Museum, the Georgia Museum of Art, and the Mobile, Birmingham and Huntsville Museums of Art in Alabama. Craig has received fellowships from the Alabama State Council on the Arts, the Tennessee Arts Commission, and a southeast regional fellowship from the National Endowment for the Arts. In 2018 he had the privilege of receiving the prestigious Award of Distinction from The Furniture Society as well as a Lifetime Honorary Membership from Tennessee Craft. He has also received the Alabama Governor’s Arts Award (1985), the University of Alabama Alumnus Arts Award (1997), and the Druid Arts Award (1990). Craig has completed two successful public art projects for the Atlanta Hartsfield-Jackson Atlanta International Airport, including the iconic Corncorde, a ten-foot long carved wooden jet ear of corn commissioned prior to the 1996 Atlanta Olympic Games. And, in 2013, he completed a commission from the Metro Nashville Arts Commission that was among six works to commemorate the response to the 2010 Nashville flood. The 12,000 lb. polychrome concrete bench sculpture sited in the Bellevue community of Nashville, represents an intersection of Nutt’s experience in emergency response and art.

Craig reflects on his time in the Department of Religious Studies:

I am surprised and honored to be recognized by the Religious Studies program even though I have made my career as an artist rather than as a scholar in that field. It appears that the same spirit that drew me to the department in the late 60’s and early 70’s lives in its current culture.

Courses like Religious Dimensions in Contemporary American Literature, Origins of Eastern Religions, and Liberation Theology addressed topics that were part of the zeitgeist and appealed even to a student with a largely secular background. Along with foundation courses they gave me insight into the dynamics of religions, society in general, and into the inner working of my own mind.

Pat Green, a great mentor and charismatic teacher deserves much credit for turning an elective into a major, despite the absence of any analytical rationale of why I should pursue a degree in religious studies. In fact, the knowledge I gained has been surprisingly useful in my later pursuit of a career as an artist. I would also like to express my appreciation of Joe Bettis, Leon Weinberger, Dorsey Blake, and Ron Robel.

Ron Robel was not formally part of the department at the time, but this has stuck in my mind: I took a class, History of Oriental Thought (I think), that was offered for credit in Philosophy, History, and Religious Studies and taught by Ron Robel. Ron was a great lecturer, and I remember him telling the class that he was available except for the hour before the class when he was meditating on the class, and the hour after when he was reflecting on it. This was many years before I had an appreciation for craft or skilled in a craft discipline. I believe I remember that because of what it said about his approach to the craft of teaching. And, when he later brought Chinese food to Tuscaloosa, that too was very well-crafted. Some lessons are not spoken, written, or easily quantified.

We see Susanna and Craig, who have each excelled in their chosen careers, as role models for current students — whether or not one becomes a scholar of religion, the Religious Studies classroom provides a grounding that is surprisingly relevant to almost any future you can craft for yourself.

Stay tuned for an announcement, later in the semester,
for nominations for the 2020-21 Dickey Alum Award.