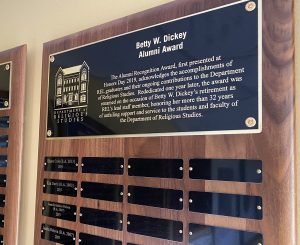 In the Spring of 2019 the Department established a new annual award — the Alumni Recognition Award — to acknowledge both the continuing contributions that REL grads make to the Department and its current students as well as the interesting and sometimes unexpected things that our grads have done after they’ve left Manly Hall. The following year, it was renamed in honor of Ms. Betty W. Dickey, who worked in REL as its Administrative Secretary for 32 years and who retired on April 1, 2020 — in recognition of her longtime commitment to helping our students to succeed.

The Dickey  Award will be determined by a faculty committee each year (with nominations from any faculty member) and awarded at our Honors Day ceremony. Grads receiving the award will be notified ahead and, whether they can attend or not, will be a guest at a Grad Tales event (in-person or virtual) the following Fall.

The recipients have been:

Khara earned her B.A. in Religious Studies and Public Relations at UA in 2013. She then began a career in health care product development and marketing at BlueCross and BlueShield of Tennessee. She then earned an MBA at the University of Tennessee at Chattanooga (2016) and now, back in Birmingham, AL, she works as a product specialist for Blue Cross and Blue Shield of Alabama while also being on the prowl for historic artifacts in and around Birmingham.

Kim graduated with a B.A. in Religious Studies and French from UA in 2003. She earned an M.A. in French in 2007 and a Class A Certification in Second Language Pedagogy (2010).  She now teaches French as well as a very popular class on mythology at Tuscaloosa County High School, sometimes takes students on study abroad trips to France.

Jennifer earned a B.A. in Religious Studies and English at UA in 2007. She earned a M.A. in Education at UAB and taught middle school English (2010-17). She developed an interest in ed technology, learning to code, receiving a scholarship to Flatiron School’s Web Developer program from Women Who Code. She is now a software developer at Quantalytix, Inc. in Birmingham, AL.

Justin graduated with a B.A. major in Religious Studies and a minor in REL General Business in 2007. He then pursued roles in information technology, working for a software-as-a-service startup. He has worked in operations, marketing, and sales, and now information technology infrastructure sales with a Birmingham-based company.

Susanna graduated with a B.A. in REL and a B.S. in Nursing in 2013. After working as a registered nurse in an emergency department she returned to school to earn her M.S.N at Vanderbilt in 2019, then obtaining triple board certification as an Adult-Gerontology Acute Care Nurse Practitioner, Family Nurse Practitioner, and Emergency Nurse Practitioner. She is now  a nurse practitioner in north Alabama.

Craig earned his B.A. in Religious Studies in 1972, and since then he established himself as a nationally-recognized studio furniture maker and sculptor. His whose work has a place in many of the nation’s art collections, including the Smithsonian’s American Art Museum, the High Museum of Art, the Tennessee State Museum, the Georgia Museum of Art, and the Mobile, Birmingham and Huntsville Museums of Art.