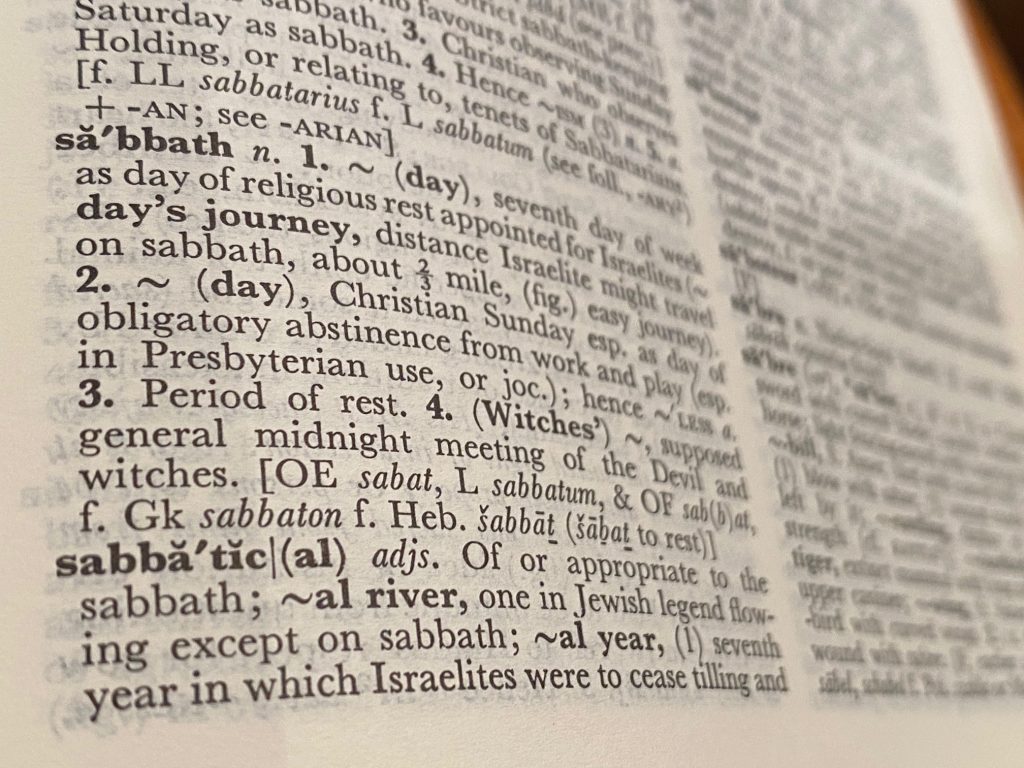 I have the good fortune to have been granted a sabbatical this semester. But what does that mean? What should I do? I looked up the word “sabbatical” in the Oxford English Dictionary and found a number of definitions.

There was the adjective form of “sabbatical,” the oldest meaning of the word:

a. Pertaining to or appropriate to the Sabbath.

But I’m not doing something sabbatical this semester. I have a sabbatical. A noun. Looking under the noun definitions, the first on is:

a. sabbatical year  n. the seventh year, prescribed by the Mosaic law to be observed as a ‘Sabbath’ in which the land was to remain untilled and all debtors and Israelitish slaves were to be released.

Well, this is certainly interesting. A year that the law of the ancient Israelites required where they would not work the land. But that can’t be it. I kept looking.

It certainly feels like the end of the world sometimes lately. But that can’t be it.

c. Originally U.S. Designating a period of leave from duty granted to university teachers at certain intervals (originally every seven years) for the purposes of study and travel

Now we’re talking! So this must be it. This is my semester for study and travel. Interesting how the meaning of the word changed–from a year where the ancient Israelites were supposed to not work the land to a period set aside for doing work. But this is a different kind of work: study and travel.

Right now, travel is definitely out. But study, study is something I can get behind. This semester I won’t be teaching any courses and I won’t be doing any of my usual departmental duties (thanks to Prof. Trost for taking over as undergrad director. See him for all of your advising needs.). Instead of these duties I will be studying and writing. I’ll be working on two major projects. First, I’ll continue to work on the various planning and publications for the American Examples program. We have a book going through the publication process right now! Second, I’ll be finishing up writing my second book, tentatively titled Hinduism in America. It is a survey of the history of Hinduism in the United States from the 18th century to the present and I hope it will be a really useful resource for all sorts of courses on Asian religions in America, religion in America, and Hinduism. Hopefully, by the end of the semester I’ll have the manuscript of the book done…, because it’s due to the publisher in December.