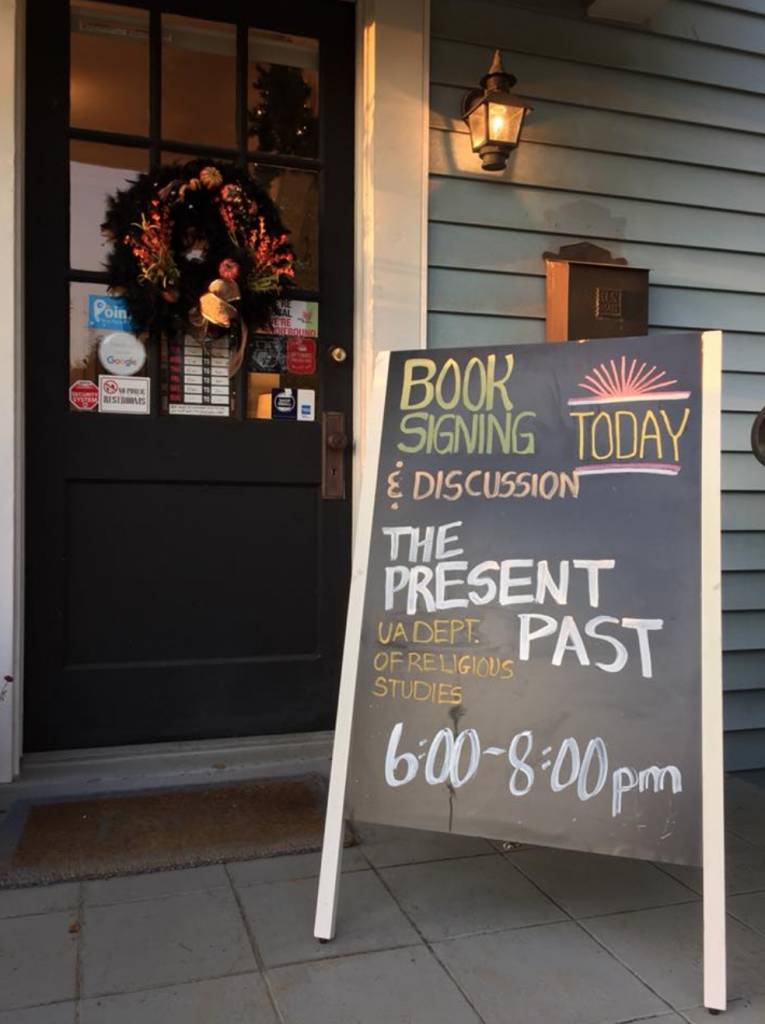 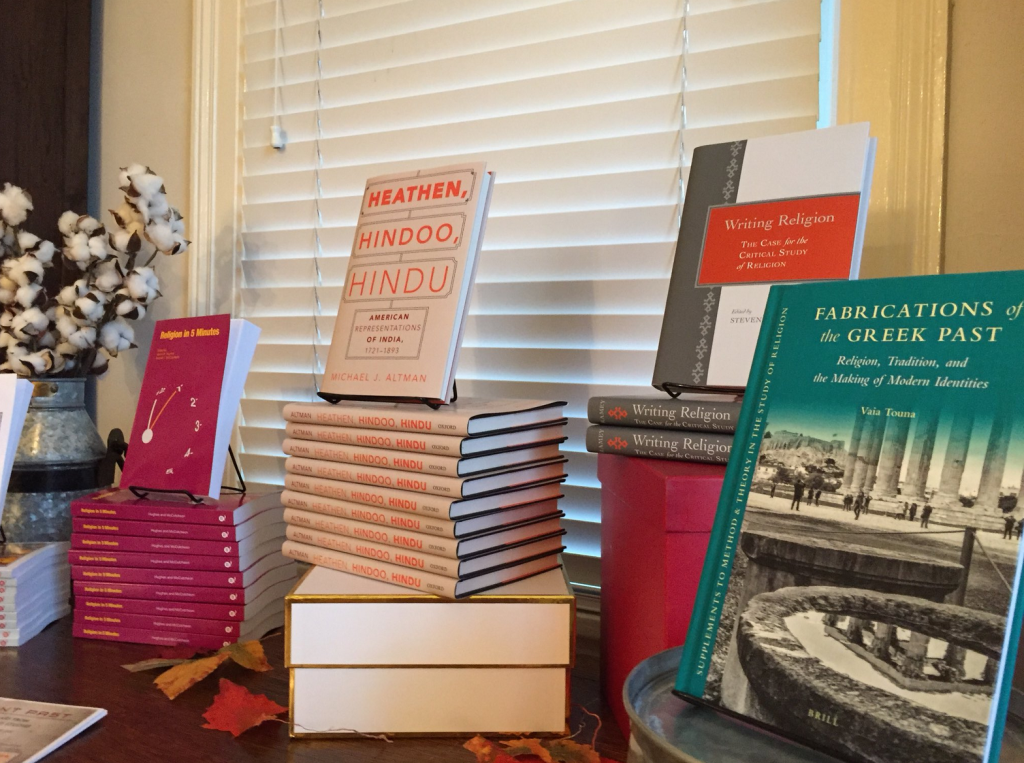 Our faculty members have a reputation among UA students for offering rigorous and interesting courses, sure, but they’ve also got a history of producing innovative research that catches the attention of readers across the country and even at universities elsewhere in the world. 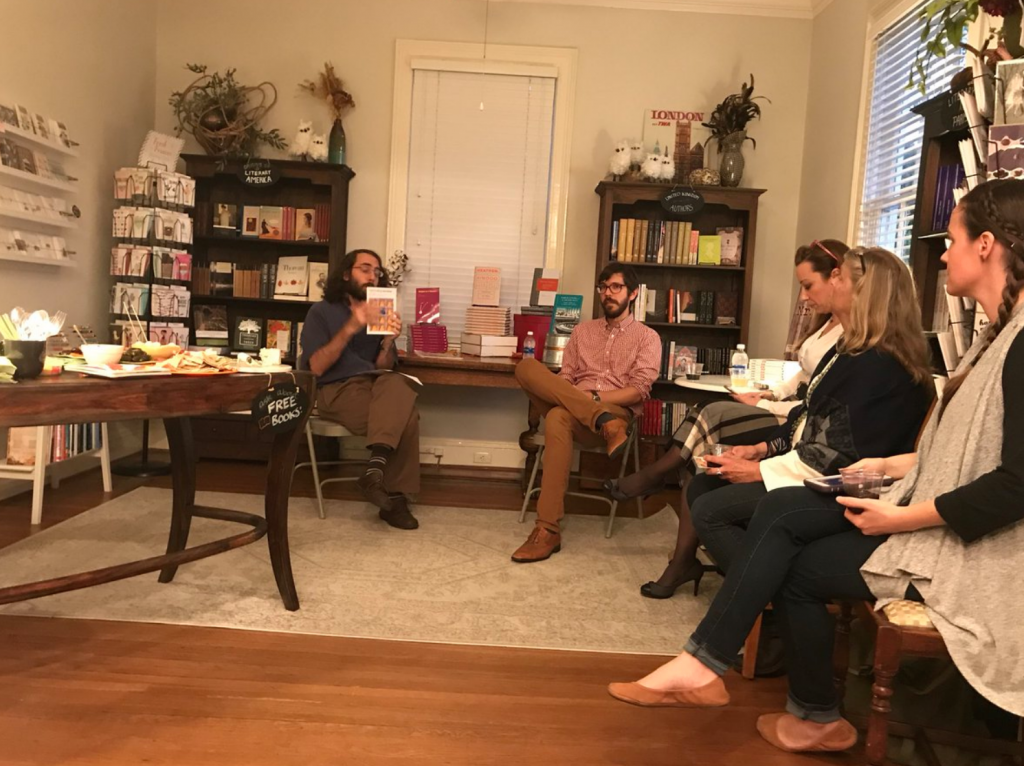 So last night (at an Q&A event hosted by Steven Ramey) was a chance for some people here in Tuscaloosa to get a chance to learn a little more about what we do in the study of religion, such as Professor Altman’s first book on the various ways in which earlier generations of writers in the US reacted to, and then used for their own local purposes, what was at that time new and “exotic” information about India. 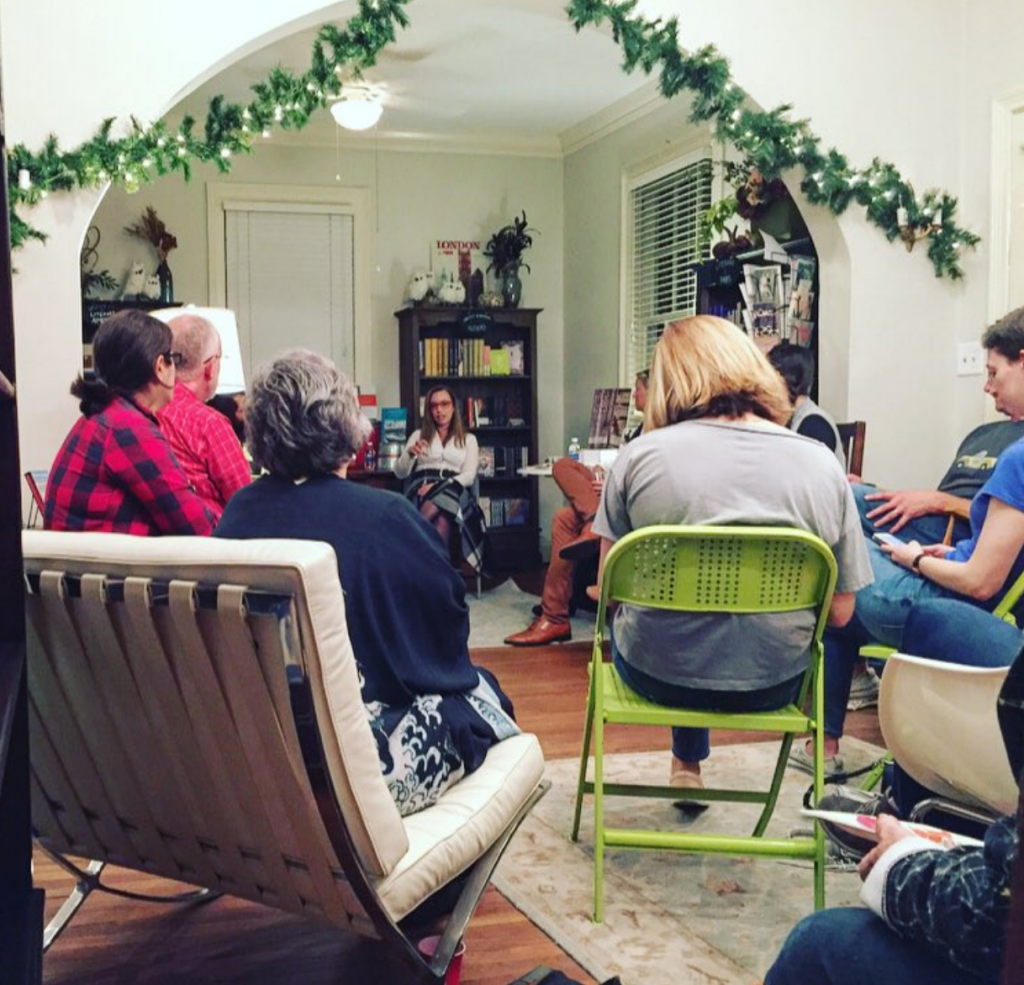 And then there was Vaia Touna’s first book, examining a variety of sites where the modern idea of an ancient and authentic Greek identity is created and circulated — a process ranging from how one reads a text to how we make sense of damaged frescoes on the interior of a little church.

As pointed out by Ramey, what was interesting was how each book, though on different topics and written by people who studied at different schools, nicely demonstrated the present stake that writers have when talking about things removed from them, either in geographic space or chronological time. 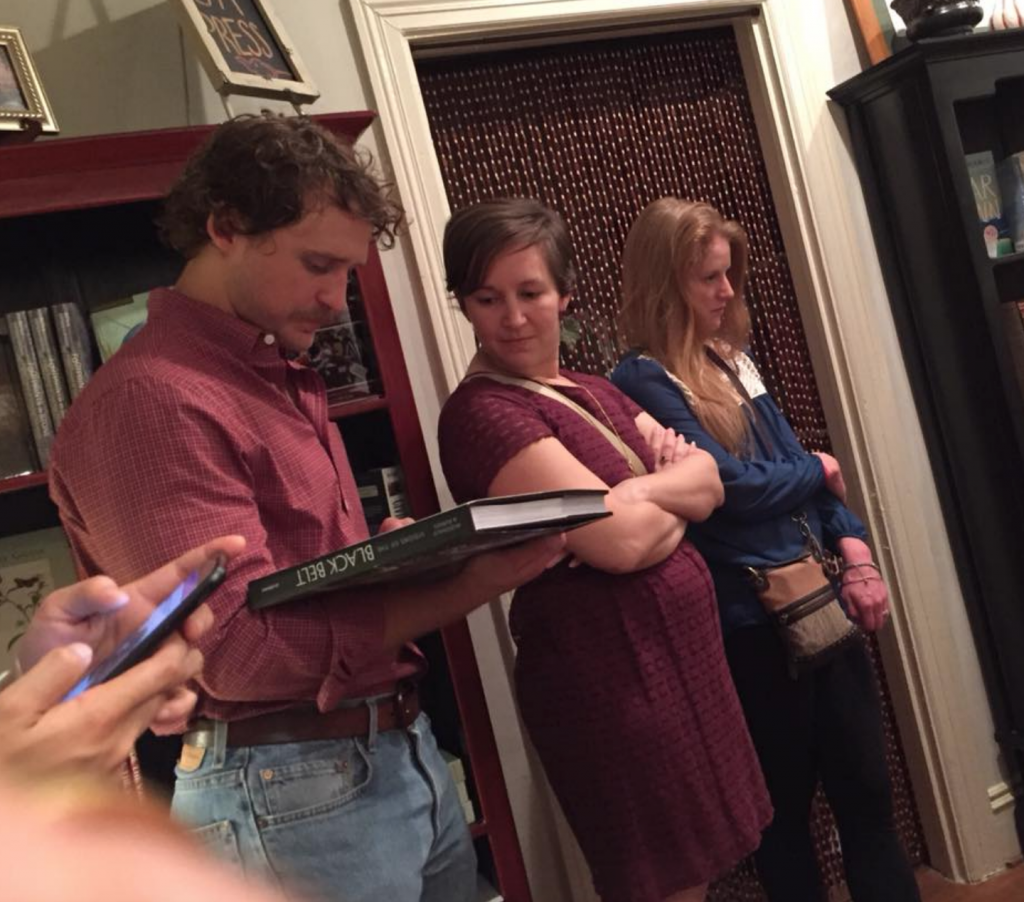 Among those attending were REL BA and MA students, members of the local community and, yes, even a couple REL grads — Tim Davis and Kim Davis (above left and middle). Kim’s a local high school French teacher (who, yes, also teaches a popular course on mythology — a course for which some REL faculty are currently helping her develop some new curriculum materials) and Tim is a lawyer who, along with his wife (right), is in the midst of a move to Utah from New Mexico. So it was great to see him and get a chance to catch-up a bit. 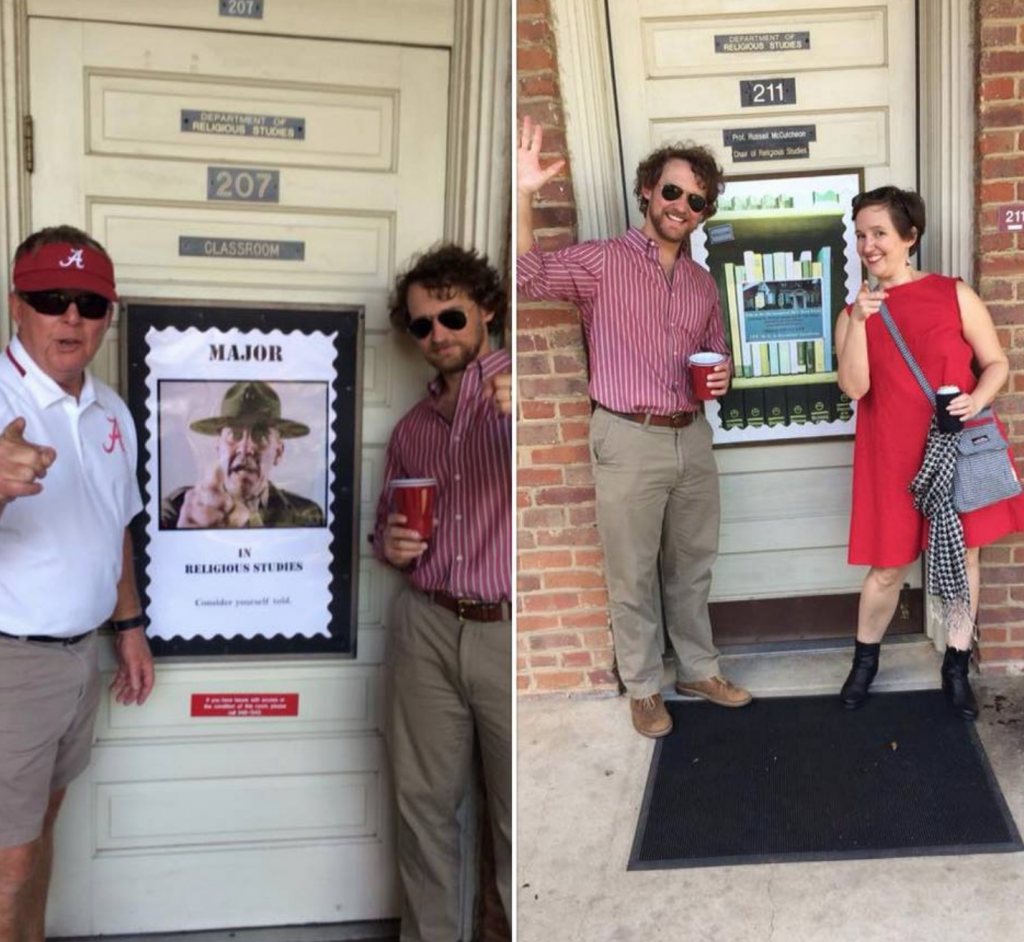 Maybe you already know that they stopped by Manly Hall recently, prior to a football game, and snapped a few pics with their dad — who appeared in an early REL film talking about why, as a parent, he valued what they did in their degree. Not seen it…? 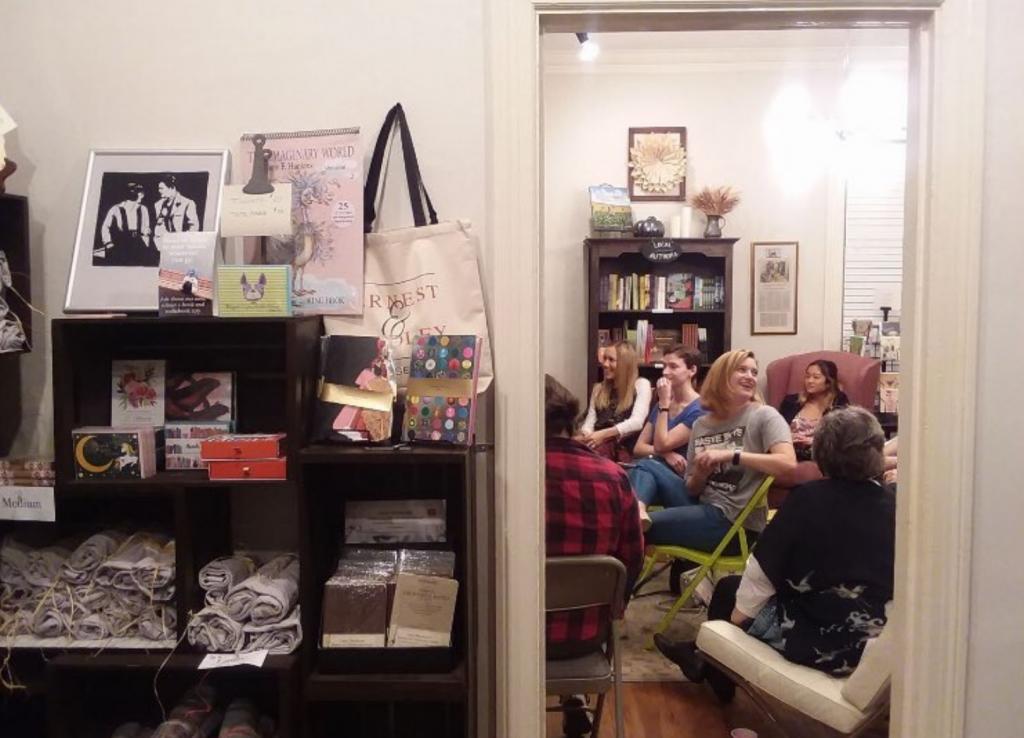 So thanks to everyone who came out on a Friday night — we could hear the fans outside getting ready for Saturday’s game. But inside we had some good conversation, some nice wine, a few munchies, and laid the basis for what we hope to see become an annual event. For we know that Nathan Loewen has a new book on the problem of evil percolating away (he recently selected his cover art, in fact), which will likely be out before next Fall, and Suma Ikeuchi has a manuscript for her first book now under review at a publisher, so there’ll likely be plenty to talk about next year as well.

If you’re interested in what went on, check out the #RELresearch hashtag on Twitter, where Sarah Griswold, one of our current MA students, was among those live tweeting the event.

And thanks to Ernest & Hadley Booksellers!