We’re experimenting with a new feature in our Department this year: Live Tweets form the Lounge. For we’re now on Twitter, and it occurred to us that periodically inviting a different faculty member to just hang out in our Department lounge for an hour and tweet about what’s going on, what they’re teaching this semester, or what they’re working on in their own research might be a way to engage students or any other Twitter followers. It’s fun, sure, but it’s surprisingly informative; we’ve done two of these so far (some tweets from our most recent are below) and, if they’re any measure, it seems to be a real success — if you’re measuring success by a variety of people on a large campus feeling involved in the life of the Department and learning about/communicating with each other. (Search #loungetweets on Twitter to see more.) 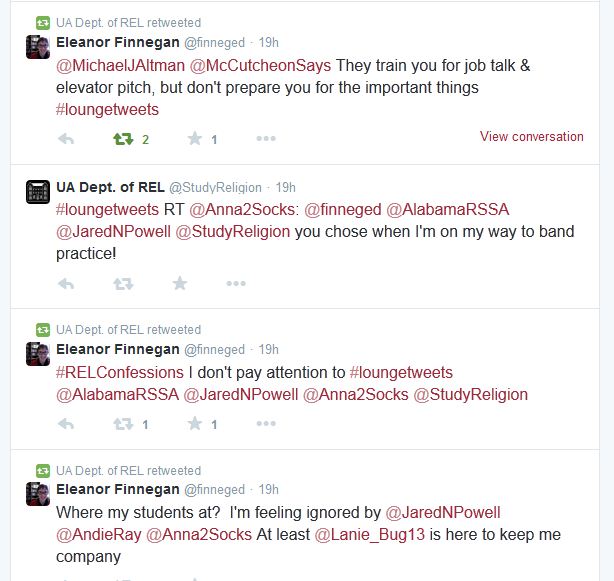 Which brings me to why I wanted to write this post: we do some fun things in this Department, that is true, but we’re also way more productive as scholars than you might imagine to be the case for the faculty of a small B.A.-granting program. In fact, I’d put our teaching and academic stats up against any other Department’s in the field today — judged pound-for-pound or even the raw numbers.

And with these stats in mind, one thing has become clear to me: work and play are not divorced from one another.

Many assume they are, though — thinking that fun is frivolous and tangential to what serious scholars ought to be all about. I hear this viewpoint sometimes in the responses that greet me when I’m talking elsewhere about the fact that, for instance, we have Department mugs. I can feel the eyes rolling.

Sadly, too many professors are very poor social theorists when it comes to examining their own work conditions and thus the institutional world that they inhabit. For whatever reason (sitting in a cubicle in a library for years on end doing your solitary research, perhaps?), they often take their object of study as self-evidently compelling, not in need of a little PR from time to time, leaving many academics not only incapable of talking about their work to anyone but another specialist but also dumbfounded that enrollments in their courses drop when students don’t share the same inherent fascination for X or Y.

And that’s where the fun comes in, I think; sure, calling it “fun” might not be the best word, but, you know, I don’t really remember studying for my last year of biology in high school, the course that I absolutely aced and which led me to think I might want to go into the life sciences at university. I’m sure I did study, of course, probably studied lots, but I enjoyed the subject matter immensely and so, dare I say, the class and the work was, well, fun.

So the various things that we do in the Department (like those theory-rich buttons we gave out to returning students last year) hopefully signal to others (students? parents? colleagues? administrators?) that we’re not only engaged in our own work, but that we think that what we have to contribute to an education is itself engaging (how’s that for a nice opening onto conversations on the relevance of the Humanities?). And, yes, we think that they’ll agree. Now, these things we do to catch someone’s attention aren’t random, of course. They’re all aimed to represent what we do in our classes and in our own research, and thus they pull the sled of Departmental success, whether it means simply announcing that we exist or maybe injecting a moment of theory into a situation where you’d least expect to find it.

Or, to rephrase, nation-states have flags for a reason.

Lesson learned? The key to engaging people is communicating to others your own engagement, showing that the distinction between work and play might be more porus than we usually think.

After all, no one wants to be dull.

One thought on “All Work and No Play…”