Why pursue an MA in the humanities when the chances of securing a tenure track position with a PhD are so low? That is a common question that students and faculty grapple with in the current university context. Helping students prepare for both their future and the myriad ways that they can contribute to society needs to be emphasized, which is something that we take seriously in the MA in Religion in Culture program at Alabama. Last Monday in Denver, […]

Read More from The Possibilities of Graduate Education

Often in the study of religion you’ll hear people saying things like “I don’t do theory” (yes, there’s often an emphasis on the verb, akin to saying “I don’t do [insert something with which you disagree or dislike]) or maybe you’ll come across a conversation on when to introduce theory to undergraduate students — right from their first course or, fearing that will alienate them from the field, only doing so later, “once they’ve already got the basics,” as some […]

As part of the MA in Religion in Culture at UA, students attend a monthly colloquium designed to introduce them to community members seeking graduates with strong critical thinking skills. During these meetings, the Department of Religious Studies brings in individuals from within and outside of the University to share their experiences in the job market. Their presentations often focus on the ways that the tools each MA student is cultivating in their humanities courses can be useful outside of […]

Dr. David Robertson is Co-Editor of the journal Implicit Religion and co-editor and founding editor of The Religious Studies Project. If, like me, you use the kind of critical approach that Russell McCutcheon was talking about in his recent post, focusing on processes of designation, then you’ll sooner or later be told by a colleague that you waste time endlessly arguing about definitions. Often this is followed up by the claim that they “don’t do theory.” I’ve even had people exasperatedly tell […]

Read More from Real People, on the Ground

So…, just why are people religious? It’s not a question everyone asks, since many scholars today are more concerned with what it means (often to the participants themselves) to be religious. But there are those in the academy today who, like those who helped to establish the study of religion in the late 19th century, are interested in explaining the historical (even evolutionary) cause of religion or its contemporary function. Often, though, they are found outside Religious Studies, in other […]

Read More from A Social-Psychological Theory of Religion

Nyx (/nɪks/;[1] Greek: Νύξ, Nyks, “Night”;[2] Latin: Nox) is the Greek goddess (or personification) of the night… So opens a Wikipedia article that caught my eye the other day, because of the theory of religion buried in it. For by means of a misleadingly simple parenthetical aside, one that hearkens back to a much earlier approach to understanding religion, the writer tells us a great deal about their thoughts on why people tell tales of the gods. […] 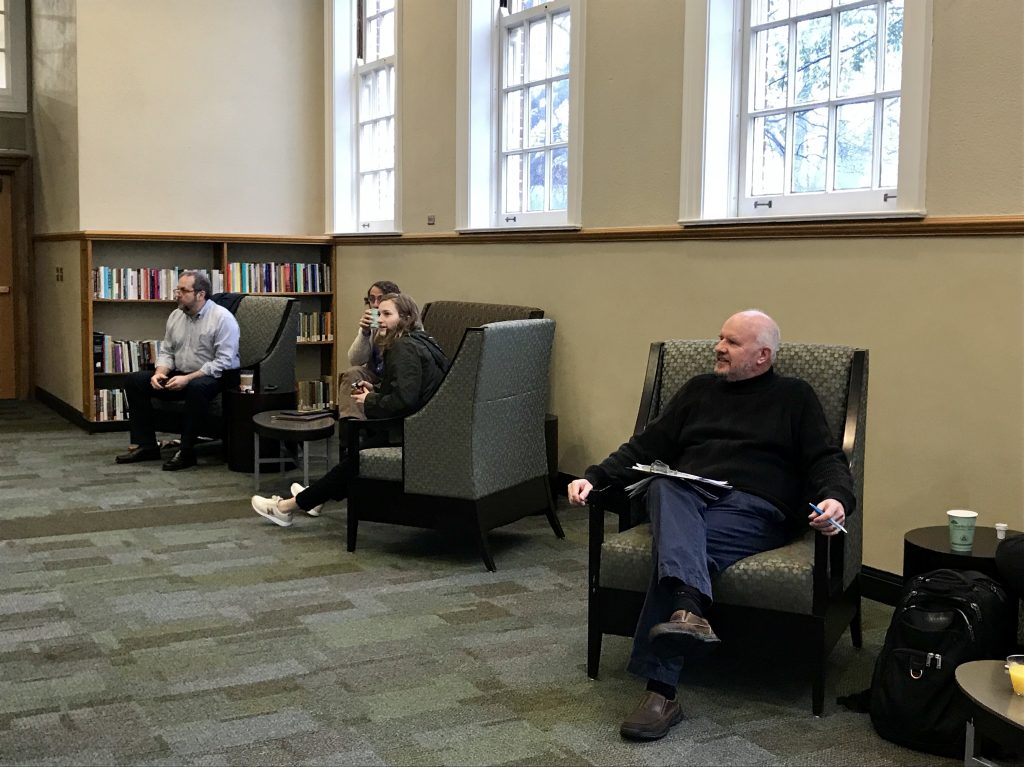 Last week, the Department of Religious Studies hosted its annual Undergraduate Research Symposium at Gorgas Library. Students from Religious Studies courses collaborated with advisors on written projects before presenting their work at the event. The unique topics, challenging question-answer portion, and free coffee made for a refreshing Friday morning. Professors, alumni, MA students, and undergraduates used social media to keep up with the event. […]

Emma Gibson and Sierra Lawson have spent the last two years developing their skills in research, social theory, and the public and digital humanities among other useful accomplishments. This spring, both students will graduate with a Master’s of Arts in Religion in Culture and plan to put their analytical tools to work as they further their education. Emma will pursue a Master’s of Architecture while Sierra earns a Ph.D. in Religious Studies. Find out what these young women have planned […]

The Department of Religious Studies will have a variety of students graduating in May after earning a Bachelor of Arts as majors in the Department of Religious Studies. Over the last four years, each senior has learned and applied social theory through various research projects, independent studies, and a number of unique REL courses. Taking classes like Religions of the World, Theories of Myth, and Religious Existentialism, students were able to shape a unique study of religion that best fit […]

The 2019 call for papers has just come out from NAASR — the North American Association for the Study of Religion — asking for respondents to invited papers that will each address one of four aspects of the field in which we do our work (a format the meetings have used for the past 5 years); the association also announced its upcoming workshops for grad students, all of which will take place at its November annual meeting in San Diego. […]

Read More from It’s Worth Taking A Closer Look