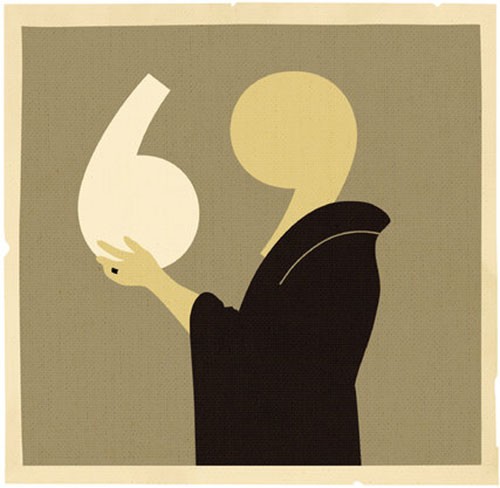 I’ve been putting quotation marks around the word religion for a long time now — some people dismiss them as affectations, others call them scare quotes.

I don’t use them for emphasis (that’s what underscoring or italics are for, right?) and I don’t use them as a shorthand to communicate that I’m using the word in a way other than common usage — i.e., like saying “so-called religion” or “the activities formerly known as religious” — as if I still want to talk about the same old things while just giving them a new name (like calling them a tradition or a worldview). And I don’t use them to signal irony.

No, when I use them I’m hoping that readers understand that I’m trying to draw their attention to our very ability to think of a domain called religion that’s (A) coherently organized internally and (B) distinguishable externally from yet others. To rephrase, I’m interested in a particular sort of taken-for-granted compartmentalization that we find in some places and some times, one that impacts those dialectically arranged things we call individuals and groups — interested in its history and the implications of its use. So I’m interested in how this way of behaving gets connected to that way of dressing, to this other way of cooking, to that claim you make about where the world came from, to that holiday you celebrate…, and how all this is then distinguished from other people doing the many other things that they do and saying the many other things that they say.

I’m interested in how this word, used in various ways, helps us to manage life — like the sorting that’s made possible by means of the many other taxonomies we employ in our daily lives.

For when I look outside my window I see all sorts of stuff that, I presume, is organizable in all sorts of ways — and by organization I mean both classifying and ranking, since merely saying that this is different from that is rarely, if ever, divorced from the attendant claim that this is better than that or that is derived from this.

So my interest, for some time, has been how grouping certain items of the world together as all being religious, in obvious distinction from these other items in the world (that are variously collected together and known by the adjective political or social or economic, etc.) — doing so whether to praise and protect the so named items or to criticize and degrade them — was a form of management that could itself strike us as curious and deserving of study, perhaps in the way that an anthropologist would study the structure of any group’s social world. (Hence my focus on the act of defining religion.) After all, not everyone in the world does this, and even those who live in groups that do hardly agree with how they use that classifier “religion.”

When I think of this interest I can’t help but recall an early reading of Michel Foucault’s The Order of Things (the French original was published in 1966), whose Preface memorably opens as follows: 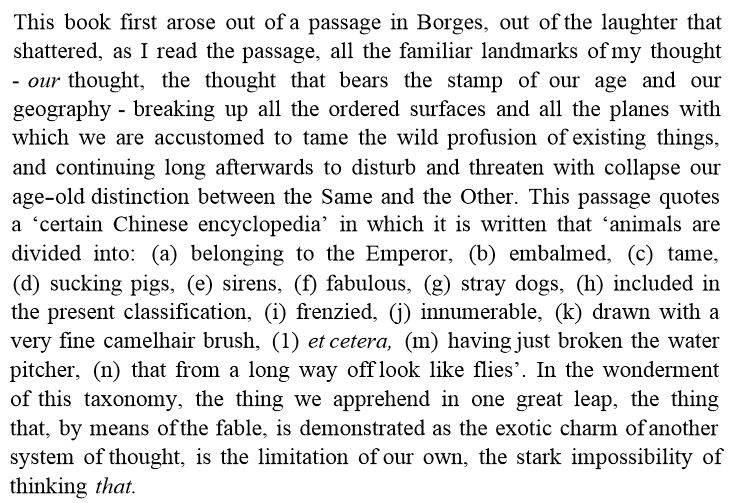 Foucault continues: “But what is it impossible to think, and what kind of impossibility are we faced with here?” And this is the question that I think we ought to be asking about either our penchant or compulsion, if those are even the right words, to divide up the things in the world as being either religious or not, as if this word somehow enables us to carve the world at its joints (as, I believe, Plato phrased it).

Often I now see writers place the quotation marks around the word religion when they’re clearly talking about religion or religions, and so I’m not sure what they’re up to — other than signaling that, though recognizing the critique, they can’t help but think by means of the category. A recent case in point is provided by John Milbank in an article entitled “We Have Never Been Secular,” where he writes:

Most cultures have no equivalent word for “religion” because the overall shape of their beliefs and ritual practices are inseparable from the social, legal and political pattern of their lives. Both the shape and the pattern are religious in the sense that every culture has to regard its own core as somehow normative beyond itself and as critically revisable with consistency in relation to this normativity.

So while seeming to recognize the local nature of the category he nonetheless universalizes its adjective — people are obviously religious even if they don’t call it religion, i.e., there’s an it there, you can count on it. (What would be more refreshing is if he owned the category and the situation from which he talks about the world, saying that he can’t help but see their actions as religious. But that would require a very different way of writing about the world and oneself…)

For someone trying to take Foucault’s wonderment seriously — for someone with an interest in the basic ways in which knowledge and action are organized so as to seem meaningful to us, thereby allowing us to experience ourselves as different or the same as those others — this just won’t do, for it’s a rhetorical trick that allows us to look context-bound and concerned with history while simultaneously making light of it.

So I plan to continue using the scare quotes, in hopes that whomever I’m speaking with will see that I imply something different from some others who now use them too, hoping also that my interlocutor can make the switch from simply inhabiting and universalizing a self-evident social world to being just a little curious about why and how they can inhabit it in the first place.

Not everyone can do that, I know, but that’s just as well, for it gives us lots of people to study.

One thought on “The Wonderment of This Taxonomy”