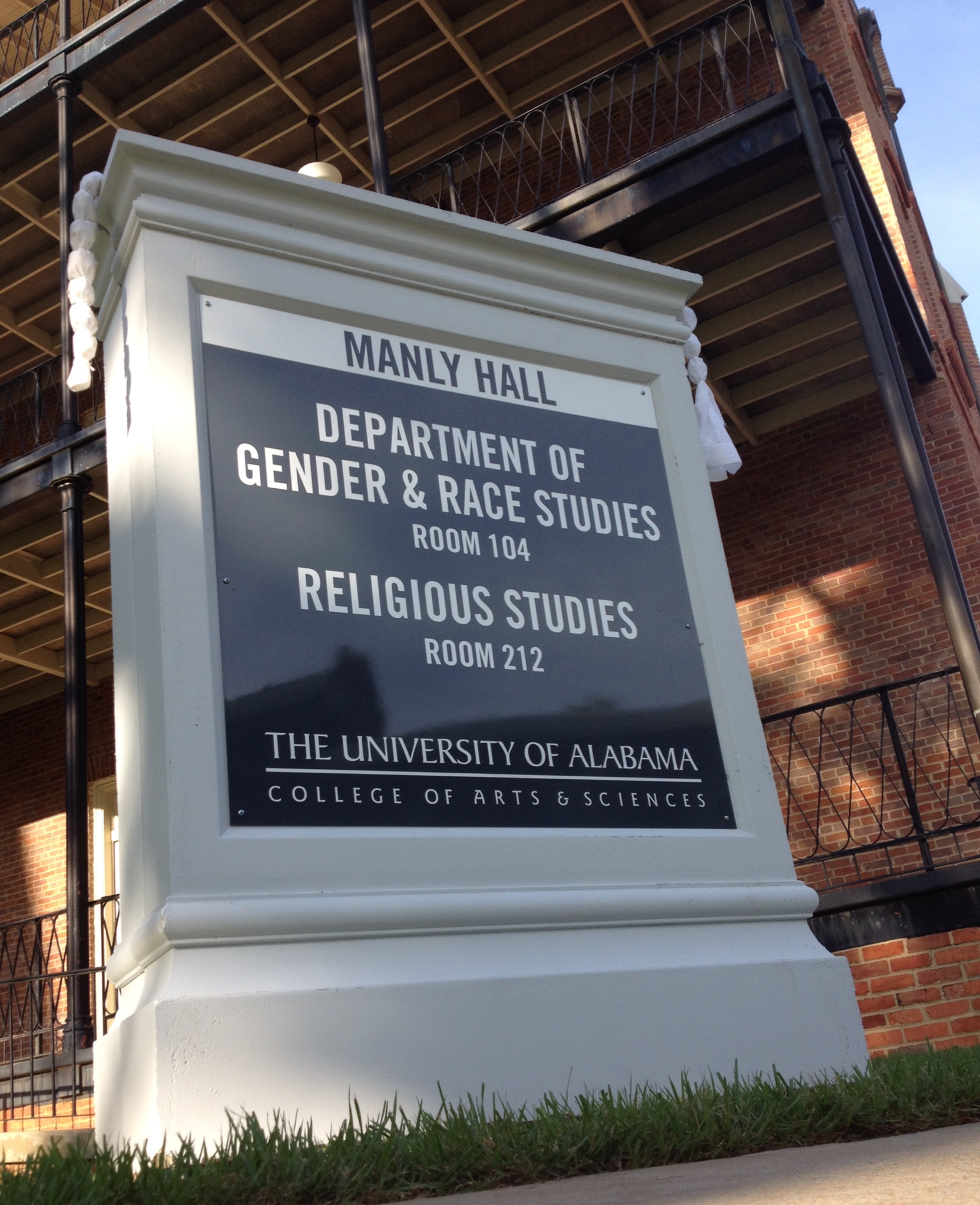 Yes, our Department is housed on the second floor of Manly Hall. It’s named after the second president of the University of Alabama, Basil Manly Sr (who held the office between 1837 and 1855). In fact, the president’s office was once in this building, on the ground floor (before the Greek Revival-styled President’s Mansion was built in 1841 and then first occupied by Manly himself), as well as dorms for students.

And the other day the building got a new sign.

There used to be a historic plaque on the ground floor, attached to the outer wall of the building, identifying the building’s namesake, but that disappeared a few years ago. I’ve always wondered if it had something to do with someone taking into their own hands the inevitable complexity of anchoring the continually changing present in the past; after all, as the online Encyclopedia of Alabama puts it:

He was an early proponent of secession and an ardent supporter of slavery who used the Bible and Christian teachings to justify the institution.

But what I find interesting now is the recurring observation of how ironic it is that what was once called Women’s Studies (now part of the Department of Gender and Race Studies) is also located in Manly Hall. While I certainly understand how this might strike someone as ironic, at best, or, at worst, a surprisingly blatant representation of how marginal positions are continually subsumed within dominant discourses, I think there is more going on here than first meets the eye.

For, in order to see the irony, it seems to me that one must presuppose that gender = feminine (which, ironically, naturalizes masculinity as the norm, as if it is neutral or non-gendered), for only then can our neighbor’s placement in Manly Hall be judged curious. If, however, one takes seriously not only that Department’s recent name change from “women” to “gender” but also that gendering encompasses the acts of creating lasting impressions of femininity and masculinity as well, thereby taking seriously that both identities — as with all identification, such as with race too — are forever co-constituted by means of their presumed other, then the happenstance juxtaposition of a modern Departmental identity and an historic Alabama surname is either less than interesting or, at its best, a profoundly illustrative moment in the ongoing dialectics of situated identification.

For to act manly — whatever that may signify to you — is just as gendered as anything else, no?