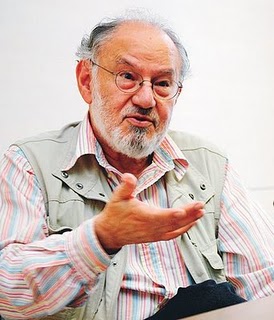 Have you read Craig Martin‘s new interview with Talal Asad, just published in the Bulletin for the Study of Religion?

Elaborating on his answer to Martin’s opening question, about what he had hoped to accomplish with his now influential book, Genealogies of Religion, Asad replies:

Religious language — like all language — is interwoven with life itself. To define “religion” is therefore in a sense to try and grasp an ungraspable totality…

I have long had issues with who quotes Asad’s work and for what ends — for it seems to be a shield used by traditional idealists (call them theologians if you will but that’s hardly getting at the diverse group I have in mind) who still wish to talk about such non-thing things as ungraspable totalities, all the while sounding rigorous and empirically-based. That is, they often advocate such things as studying “religion on the ground” but then say we can’t define religion in any satisfactory way — yet how they knew where to find the undefinable “it” on the ground is left unexplained, of course. Or we’re told that we must avoid reifying Islam, for example, and must instead study actual Muslims rather than coming up with a universal definition of Islam — yet how are we to identify who is and isn’t a Muslim without, yes, a definition that can be used in a variety of locales…?

These are the sorts of contradictions that I find hard to overlook.

Case in point: if defining religion is such a pointless or never-ending endeavor, as the above quote suggested, then what do we make of the adjective that opens the quote — “religious,” as in the term “religious language” — that apparently allows us to name a distinguishable subset of language? For if we take the end of the quote seriously then what sense does the opening make?

So the above quotation caught my eye while reading the interview, prompting me to wonder if one might say the same about defining, say, “toy truck” or perhaps “cafeteria”? For given the way Asad’s work seems to be about the discourse on religion, and not religion, I would hope that there is not an implied special case being made for what this word “religion” allows us to pick out, link together, organize, and therefore talk about; after all, language is language is language, we seem to be told, no?

To rephrase, I would find it difficult to imagine reading such a scholar instead claiming:

Cooking language — like all language — is interwoven with life itself. To define “deep fry” is therefore in a sense to try and grasp an ungraspable totality…

My point? While the latter quote is likely read as a banal, possibly ridiculous, observation, the former is likely read by many as a sophisticated, nuanced scholarly statement. But why? I think it is because the word religion, far from being historicized in such scholarship, still carries with it a presumed privilege and so-called depth dimension. For this phrasing strikes me as suggesting a typically philosophically idealist notion that language — the oral and written game of signification that we all play — is somehow set apart from life, and thus the provocative move is for such scholars to then claim that these two distinguishable domains are “interwoven.” Curiously, though, they’re the ones who made all the distinctions to begin with (i.e., dividing types of language by throwing in that adjective “religious”).

What’s more, to what does that noun “life” —  itself none other than a word — point, other than to language itself? What is this thing “life” that is somehow interweaving with language, separate from language? For that matter, if it is not just sounds and letters on a page, what is the referent of “ungraspable totality”? And how is it any more technical a term than, say, “irreducible complexity”?

I therefore see a surprisingly conservative theory of meaning poking its nose through in such work, one that, despite being nothing more or less than language, posits a domain beyond language — in this case “life” or “ungraspable totality” — that does or does not interact with it talking and listening and writing and reading. Whether intended by Asad or not, I think this is the opening for writers such as Ananda Abeysekara, who, heavily indebted on Asad’s work, then end up arguing (if this is the right word for such speculative claims) such — I’ll be frank — odd things as:

Symbol, released from time, then redeems itself, and thereby redeems time, by returning to time, to itself, by way of symbolizing “it,” being other than itself. Releasing carries this sense of “turn” and “return.” That which is free from time, then, is outside, or better yet, extended beyond, time. It is from this outside, from the beyond, that it — again whatever this it may be — may return to itself. (from “The Un-translatability of Religion, The Un-translatability of Life,” in MTSR 23 [2011]: 270)

To recognize that definitions are our own, used for tactical purposes and always in discrete situations, does not require us to daydream about some fantastical big picture beyond signification — “whatever this may be” — that’s elusively just out of reach and sadly beyond our limited vocabulary. The position that we adopt to make such curious claims is itself a position no more removed from language and history than any other (as if any can be!), making “ungraspable totality” a useful rhetorical term of political, but not analytic, utility — nothing more and nothing less.

So, to those who presume some realm beyond language and who therefore say such things as “I can’t quite put it into words” I would reply: you just did.

8 thoughts on “Getting Our Hands on an Ungraspable Totality”