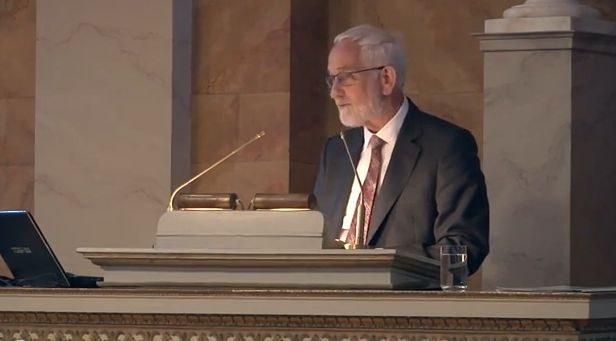 Michael Pye, the onetime General Secretary of the International Association for the History of Religions (IAHR), and respected specialist in the study of Japanese religions, recently presented a keynote lecture — “Digging for Theory” — at a conference at the University of Göttingen, Germany.

For those interested in the place of methods and theories in the study of religion, his lecture will surely be useful, for it places front and center the longstanding debate between those who argue that theory is the means by which a field is created in the first place — for otherwise, how do we know what to look at when we go out into the world? — and those who, like himself, see theory as a secondary step, something that only results after one proceeds in that classic inductivist model natural scientists once talked about, whereby you first observe carefully, doing descriptivist or ethnographic work while immersed in the field, and only later generalize from your observations to form theories about the world (whether analytic [i.e., creating comparative systems and patterns] or explanatory theories [i.e., accounting for causes and functions]).

While not wishing to speculate on who those out-of-touch North Americans accused of lazily reclining in their library’s armchairs might be (see the 4:00 point of the lecture — but apparently many in attendance at the lecture know who they are), I’ll put my own cards on the table and make clear that I’m in the former camp; it is not an accident, for example, that a Freudian scholar of religion, already armed with a view of the world that has something to do with oral stages and Oedipal complexes, “sees” the repression and displacement that supports her theory, observations made possible by her definition of what counts as religion — a definition that is her theory of religion in miniature. For without that to guide her gaze, I don’t think she’d know what “materials in the field,” as Pye calls them, to look at, since the world really is an awfully big, hectic place. That she does not stumble across, say, class conflict or minimally counter-intuitive ideas is no accident, I think, since she’s not looking for either and likely doesn’t even see “them” — after all, that’s for either the Marxist or the cog sci theoretician to find (or should I say “fabricate”?).

If this model is persuasive, if theory is needed to figure out what “somethings” we ought to be talking about, then the distinction between armchairs and the field is rather misleading, for it appears that we take our recliners with us wherever we go, for that’s how we know where to look for the evidence we end up organizing, interpreting, and explaining. For I’m not sure what someone raised in the wild, without having spent long hours reading in those stuffy libraries, would passively “come across” or purposefully “dig for” if he was dropped in the field and told simply to observe carefully — what will count as a fragment and which fragments go together?

Surely he wouldn’t naturally start using the Latin-based word “religion” and set about looking for its natural equivalents in, say, Japan. Would he?