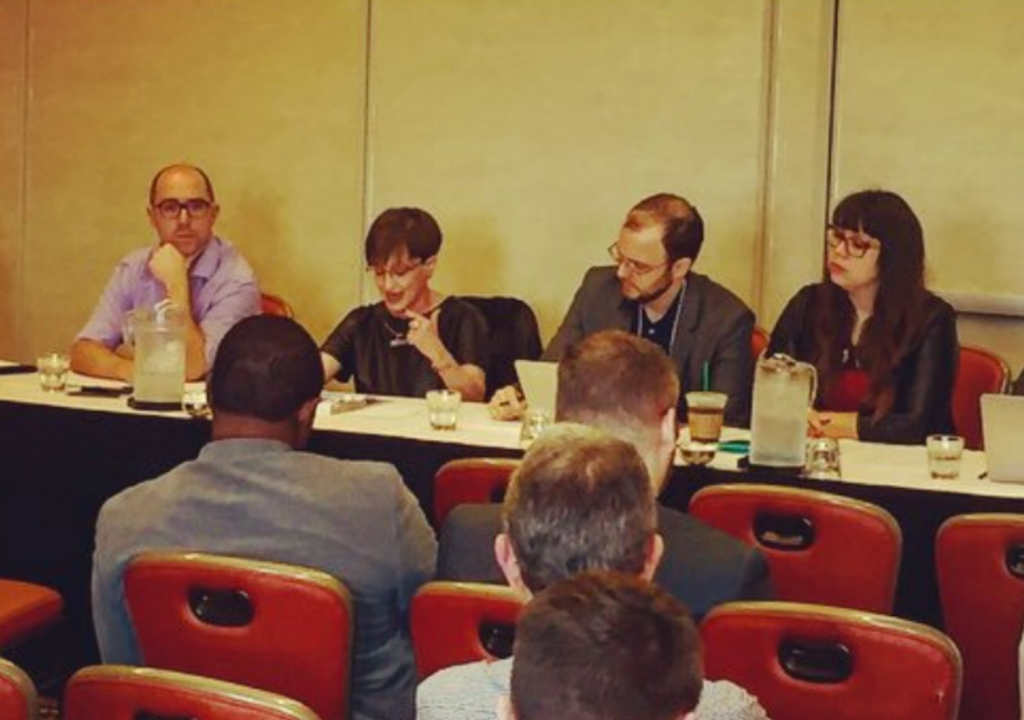 A few weeks ago, after emailing a representative of the American Academy of Religion (AAR), it became apparent to me that the Fall conference-going season in our field will be moving forward as the usual in-person meetings instead of the hybrid format that, in the light of a year living with COVID-19, I had assumed would be offered. It’s now becoming apparent to others as well, with an online petition now circulating, addressed to the leadership of the Society of Biblical Literature (SBL), framing the lack of a hybrid option as an accessibility issue. While I understand the factors that are cited by these orgs as constraining their ability to be nimble and implement a hybrid option (e.g., from insufficient high speed internet capabilities to conference venue charges for the necessary technology and its support), it seems to me that the issue is far larger than COVID-19 and that we are long overdue for the leadership of these associations to do some creative rethinking about what an academic conference now does and thus how best to offer them in the future.

For, as serious as it is in its own right, the pandemic is really just the most recent reason why this must be done — and done quickly.

My first national meeting was almost 30 years ago, in San Francisco in 1992. In many ways these annual meetings have not changed much since then, at least in format. Scholars from across the country, and from around the world, gather in a city for a weekend to present research to their peers, which involves attending a variety of panels, browsing through a book display, participating in a variety of associated meeting (that take advantage of the group all being gathered together), and interact informally in hotel lobbies, restaurants, and at a wide of array of impromptu meetings with collaborators, publishers, as well as both old and new friends. Projects are hatched, there’s plenty of requests for copies of papers, deals are made, and the program for the next year’s meeting begins to be planned.

How these meetings have changed is their sheer size; no longer does a pair of large adjacent hotels in the downtown of a big city suit our program needs; instead, attendees make the trek (sometimes across town in a fleet of shuttle buses) to large conference venues in a far smaller number of cities. As someone who has been a member of the AAR for a while, and who once played a leadership role in the former Council of Societies for the Study of Religion (CSSR — an umbrella organization, dating to the early 1970s, of which pretty much all scholarly societies in our field were once members, with their own members receiving services each org could ot afford to provide, e.g., such CSSR publications as Religious Studies Review and the CSSR Bulletin), I happen to overlap with the generation which saw the AAR and the SBL join forces and build their onetime empire, involving their joint departure from the CSSR and their institution of Openings (originally a hardcopy newspaper with ads for open positions) and Religious Studies News (originally a half-sized quarterly newspaper with professional news) along with founding what was once known as Scholars Press (the orgs’ joint publishing venue), etc. Part of this entailed planning a joint annual meeting — a relationship suspended for a few years back but then renewed not too long ago. And it was during this time that the AAR, at least, rebranded as also promoting what has been termed the public understanding of religion, with the establishment of a series of initiatives and services aimed far wider than just the professional needs of scholars of religion.

While this is certainly an overly simplified historical narrative, we begin to understand how, over the past three decades or so, these orgs have grown in size and reach.

But during this same time public politics and economics have changed as well; I won’t go into the long story of how this happened but suffice it to say that, due to a number of continuing government cuts to financing higher education, a university degree no longer costs what it once did (thus the tremendous rise in student debt in the US, at least). University administrators responded, at least in part, by opting to employ far less expensive limited term faculty to teach many of their students (with the term “contingent faculty” rising to prominence in the past decade or so, to name a diverse group of non-tenure track/non-tenured faculty who are routinely employed in higher ed). Thus, instruction costs are decreased thereby allowing for the tuition revenue, government funding (especially relevant for public schools, of course), and indirect grant and contract income to pay for other aspects of the university’s operation. Into this mix we must also add the always tempting option of increasing enrollment (thereby raising more tuition revenue), an increase at the graduate level that, at least in some fields (including our own), ran counter to the sharp decline during these same recent decades in employment opportunities within the profession for the very students our doctoral programs have trained as the next generation of university professors.

This is a bit of a perfect storm of factors, with COVID-19 really being just the most recent stress in an already contradictory situation, what with empire-building and a search for new constituencies and purposes (and revenue sources) happening just as, let’s be frank, the rug is being pulled out from under higher education.

And so it is high time for the leadership of our organizations to begin to think far more creatively about the moment that we all inhabit — and addressing it will take more than just a discounted membership rate for contingent faculty and grad students.

So let’s ask: why do we continue to have such large in-person meetings? What purpose do they now serve? To what extent do they generate revenue to run the org’s annual operations? Why are the orgs so large? What services do they actually provide for members? These are the hard questions that our leadership needs to think through, carefully. For if they do not I fear that they will continue to lay the basis for their own irrelevance in the future; after all, thinking back to that 1992 meeting (a time when email was in its infancy and when SMS text messaging was only just being invented) the world has now changed so drastically that paying a thousand dollars or more to attend a meeting in-person (a meeting that, for some, is mainly a networking opportunity) is just not even possible for many of the people whose membership dues fund these orgs.

Before concluding, I hope no one misreads this as a critique of the hardworking staff in our ogs’ national offices; my concern are the faculty elected to lead them. For, at least as represented in Departments around the country, faculty are often slow to respond to changing conditions, especially those lucky enough to have the protections of tenure and thus seniority. Apart from instituting such things as C.V.-writing workshops and mock interviews, I’m not sure the extent to which doctoral education in our field, let alone much of the humanities, has really confronted the changing conditions of our field and our institutions. And if we’ve generally not responded constructively there, what with the problems being decades in the making, then it would be reasonable to be pessimistic about seeing creative change happen within professional organizations. But, despite whatever reputation may precede me, I’m an optimist at heart — critics, after all, are people who think that things could be otherwise, hopefully better.

We therefore need to put our head’s together and figure out a way forward; for COVID-19 has made plain the problems that have long been unaddressed (i.e., calls to rethink large conferences have been made for years, after all) and which we now seem to have little choice but to confront. So there’s likely no going back to normal, since “normal” was already pretty problematic for so many of our peers.