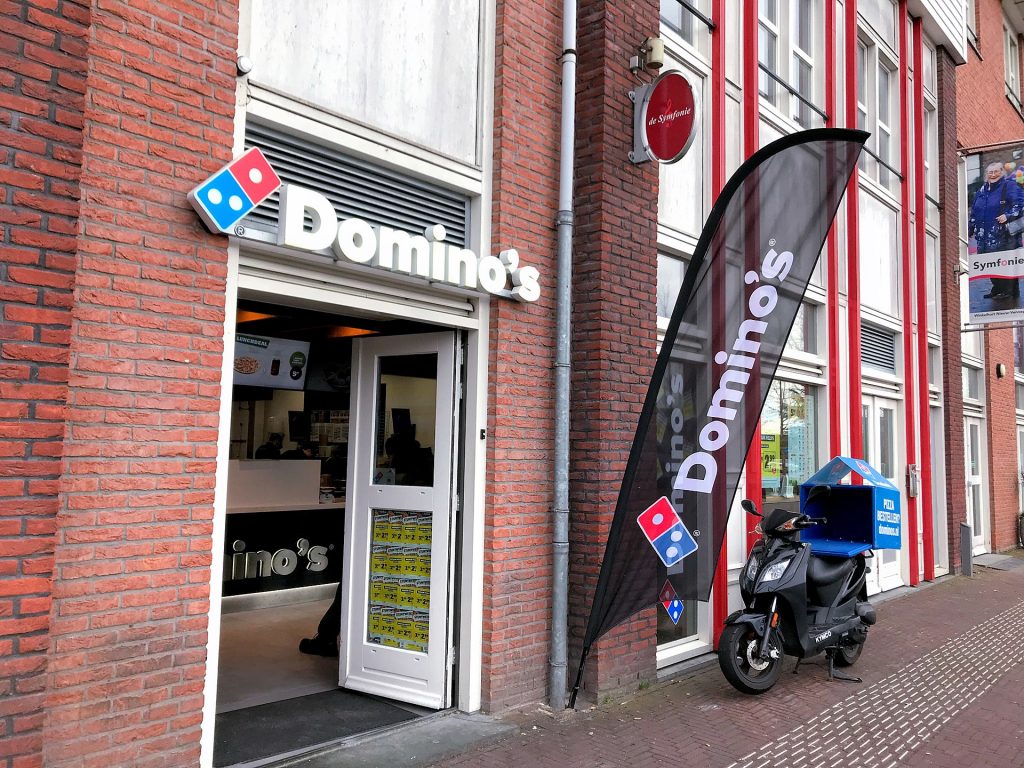 “Domino’s Pizza in the Nieuw-Vennep, The Netherlands,” photo by Amin, courtesy of Wikimedia Commons, CC BY-SA 4.0.

It’s 1:00am, and I can’t sleep. I went to sleep early to be ready for the first day of the new semester. And for the past hour, I’ve been thinking about one thing and one thing only…

I don’t have the munchies. I have no intention of eating or serving pizza anytime soon. I lie here tossing and turning, trying to shake the the company’s captivating hold on my attention. Now here I am thinking aloud about how, according to Forbes, Domino’s has managed to become the #1 pizza company in the U.S. when for most of my life the general consensus was that Domino’s Pizza served trash.

I may sound harsh, but we all knew it. Growing up in the 80s and 90s, kids joked about Domino’s Pizza being Oscar the Grouch’s favorite restaurant.

Then a funny thing happened around 2011. Domino’s reinvented itself. Yes, they changed their recipe and spruced up their logo for the new millennium. But to pull this off Domino’s had to do something about the bad taste they had left in the mouths of consumers everywhere.

They went on the offensive against themselves.

Domino’s launched a self-deprecation campaign that echoed the critiques launched by their consumers.

A scholar of religion might redescribe the company’s reception to negative feedback as a form of corporate asceticism. We would also do well to notice the social function of the ad. It gives off a “if you can’t beat your critics, join your critics” vibe. I don’t know if this makes for good pizza (false: Yes, I do!). I do know that it can establish a social report that ultimately works in favor of the criticized.

Don’t buy it? According to a report by Vox, Domino’s is coming into the next decade hot with stock prices surpassing rival fast food companies including McDonald’s, Burger King, Papa John’s, and Yum!’s Pizza Hut. In fact, between 2011 and 2018, “Domino’s stock price has grown more than 1,300 percent. Only Netflix’s has increased faster.”

Social theory is the discipline of paying attention to what people are up to. So as you resolve to become more observant in 2020, you might ask yourself where you’ve seen a similar story–call it trash to cash. Why not study religion and find out?