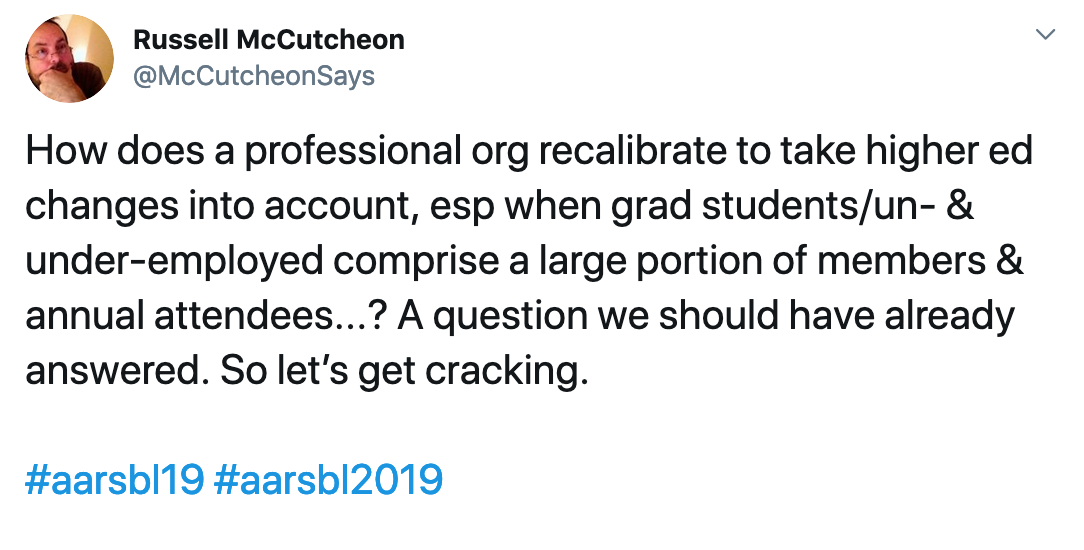 Unless there’s a rash of people in the wider public pirating name badges, it’s not tough to imagine that those who would be directly impacted by the spot scans would be grad students and under-employed scholars, sharing a name badge to get into the book display.

To say that this new policy caused a social media backlash among members of these two academic societies would be an understatement (look up the posts tagged with #aarsblQRgate, #aarsbl10, or #aarsbl2019 on Twitter to see for yourself, or find the petition now circulating online). But although this public campaign, undoubtedly also joined by quite a few private emails to both societies’ board members, was successful, and the codes are being removed, a major challenge still remains: how to reinvent a professional society in the current higher ed climate, a reinvention which would not just disregard the issue of people sharing badges but which wouldn’t even charge grad students and under-employed scholars to attend.

Even apart from the #aarsblQRgate the policy of checking nametags for entrance to the exhibit hall has to end, and I speak as an exhibitor. That policy might have made sense before Amazon when the discounts were novel, but no longer. Policing the exhibits only hurts exhibitors.

I say reinvent for a specific reason. At an AAR annual meeting session several years ago, where members got their first look at the work being done by a three year task force working on religious literacy guidelines (they completed their work not long ago), some in the audience were frustrated that what were then just draft proposals might undermine Departments of Religious Studies, inasmuch as the guidelines were, in part, aimed to empower people in other Departments, teaching on topics across the liberal arts curriculum, to address issues in the study of religion in their classes. Imagining cost-cutting Deans seeing in these recommendations a license to rethink their support for their own Religious Studies units, a number of people in the audience that day expressed their frustration, to which a task force member replied that we should keep in mind that the AAR did not exist solely to promote Departments but, instead, to promote the public understanding of religion (something being accomplished by the wide net cast by their proposed guidelines).

Now, although I’d by then long heard that particular wording — promote the public understanding of religion (for instance, see the current mission statement) — that was an enlightening moment for me, for it really sunk in how the association to which I’ve now been paying membership and conference registration fees for 29 years (I wonder what amount that even adds up to…) was involved in far more than promoting the profession of which I’ve been lucky enough to be a member. I’d known this, of course, but at a time when sustained cuts in US government funding to higher ed (estimated, in inflation-adjusted dollars, to have been $9 billion cumulatively, across all 50 states, over the past decade) has created a situation in which so few grad students and early career scholars can now reasonably hope to ever land a tenure-track position teaching at a university, well, to find a professional society to which those same students and under-employed scholars pay annual dues and registration fees strikes me as really problematic. For while dedicating resources to enhancing the public understanding of religion may have tangential civic benefits to such members (some being of real, day-to-day consequence, perhaps), I’m guessing that those resources could have had far more direct professional benefits for them had they been spent in a different way.

So what if, given the increasingly tight spot higher ed has been occupying for the past few decades, the AAR rethought it’s mission, seeing it’s duty not just first and foremost but always to be to its members and their professional interests and careers? Maybe I’m naive, but I could image quite a few of its perhaps longstanding and now cherished initiatives falling by the wayside while a host of others would be invented and pursued — always keeping directly in mind that the organization exists solely to promote the profession, which includes the sites where the profession is practiced and the people either now practicing it or training to hopefully do it one day.

It’s not such a radical idea if you consider how the mission of the AAR is described in its financial documents, For example, see the opening to p. 6 of its “Consolidated Financial Statements June 30, 2018 and 2017“:

The American Academy of Religion, Inc. (the Academy) is a nonprofit organization established to promote the study of religion and to provide a forum for the interchange of scholarly works for the benefit of its members. Membership in the Academy is composed of scholars and students who share an interest in this field and who support the work of the Academy on behalf of the scholarly study and teaching of religion.

If that’s what the AAR is all about — the specific goal of promoting the study of religion as opposed to enhancing the public understanding of religion — then it is all about enabling the work of the various people involved in the field and supporting the settings in which that work is done. And in such a world it strikes me as not unimaginable to think that we might agree that one way of promoting the field is to ensure that a number of services would be free to those at its earliest stages or those in precarious professional situations — things like conference registration, for one (coz we all know that the trip there and the hotel bill is expensive enough). But what else would be on that list…?

How we pay for that will be part of the conversation, of course (Question: should the dues for someone like me go up?), but, having looked over the 2017 an 2018 financial data, it would be a very interesting conversation to have.

We should be considering creative ways of making registration fees merely symbolic or even free for those in precarious or early career positions, not checking papers at the door. #aarsbl19

3 thoughts on “Revising our Mission”