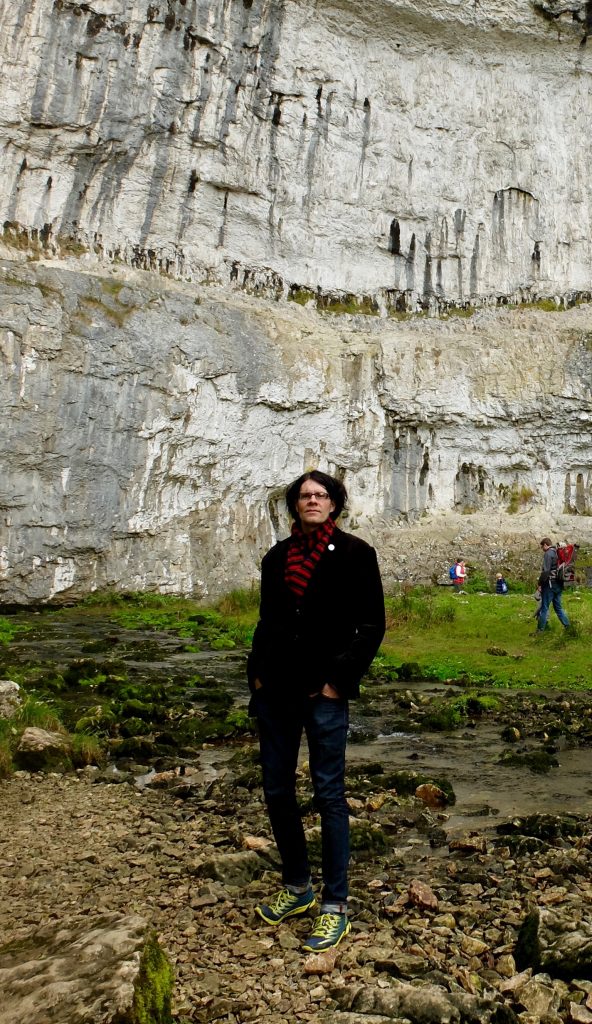 With the annual Day Lecture at the end of October, we posed a few questions to our upcoming guest, Prof. Teemu Taira (pictured above at Malham Cove, Yorkshire Dales, England).

Q: Can you tell us a little about your background: what did you first go to university to study and how did you come across the academic study of religion? Was it always clear that a future career in the university was ahead for you?

A: I did not even think of any other options than going to the university, although I had no close relatives or friends who had studied at the university. The tricky thing was to decide what to study. In Finland students are selected on the basis of exams and you have to read 1 or 2 books, so I browsed the exam books from different disciplines. I considered philosophy, history of ideas, and anthropology, but I ended up studying religion. When people ask why study of religion, I usually tell them three narratives.

First relates to the dynamics between various Christian denominations I observed in a small Finnish city where I grew up. Second is about my interest in Marx, Nietzsche and Kierkegaard in my late-teens. They all said relevant things about religion. Third relates to my fascination with different lifestyles (religious or not) and study of religion was one relevant option for reading more about different lifestyles and cultures.

It should be kept in mind, however, that we tend to construct these narratives years after the beginning of our studies. They are not to be fully trusted, although I am not trying to fool you on purpose. In any case, the original reasons I think I had for studying religion are not really visible in my research profile (unless you dig deep). The university courses, readings and discussions with friends and colleagues changed my interests. When I studied in the 1990s, one’s major was usually less than half of the overall degree, so I studied cultural history, philosophy and communication too. They were also formative in my research interests and part of my interdisciplinary education that I have learnt to value a lot.

In some sense I put all my eggs in one basket. I never had a Plan B, because I did not manage to figure out a good one. To be honest, I am not sure if I ever had a proper Plan A either. I just did what I was interested in and I did not look much elsewhere. It paid off in the end, but it took nine years to secure a permanent position after finishing my PhD. At that time I had published approximately 50 articles and five monographs, so I have no rosy image about the academic career.

There is a lot I love about working in the academia but I think that it is good to have other plans and at least keep the eyes and options open. It is great to see how some of my friends have been successful outside the academia — even those who stayed longer and did their PhDs — and sometimes those other plans turn out to be fantastic research projects.

Q: We know that you’re interested in (among other things) how groups of people classify themselves and others — can you tell us more about your work and some of its influences? Would you call yourself a social theorist?

A: I work on a couple of different but overlapping areas and I am often interested in how people identify themselves or others. This applies to my work on religion and media, atheism, and the category of religion. Interest in classification is perhaps most obvious in my case studies, focusing on groups that have tried to register themselves as religious. I never suggest that the group should or should not be considered religious; I study how the negotiation process takes place and what kind of power relations are involved in it. Who gets what if a group/symbol/practice is classified as religious or nonreligious? Some scholars appreciate this approach and some don’t get it. Sometimes people think that a scholar should say whether the group/symbol/practice in question is religious or not, because they cannot imagine other ways to be socially relevant. I argue that the opposite can be the case. For instance, some years ago the Finnish Minister of the Interior responded twice to my views in major newspapers and online news outlets when I explored one case and wrote a blog post about it.

I tend to be happy calling myself a scholar of religion, albeit one who is interested in cultural and social theory. If someone likes to call me a social theorist, I am not arguing against it but I don’t think I’ve ever done it myself. It is definitely the case that a big part of my theoretical influences come from cultural and social theory. During my first 10 years at the university I read a lot of social anthropology (e.g., Mary Douglas), British Cultural Studies (e.g., Stuart Hall, Lawrence Grossberg), sociological Zeitdiagnose (“diagnosis of our times) (e.g., Zygmunt Bauman) and French philosophy (e.g., Gilles Deleuze & Félix Guattari, Michel Foucault). At the same time I immersed myself into different theoretical debates in the study of religion — from Mircea Eliade to Marxism to sociology of religion to cognitive study of religion. I used to be a theory junkie but I am recovering.

Q: The study of religion differs in various national settings, so is there something about the field where you live and work that students here in the US might not know about? For example, do your students have opportunities to be public school teachers and is theology (if so, what type) part of a public university education?

Another relevant aspect is that one can study theology in some universities. They are ‘secular’ faculties, although you have to study theology at the university if you wish to become a pastor in the Evangelical Lutheran Church of Finland. There is also (non-confessional) religious education (RE) in Finnish schools and if you wish to become a teacher, you have to study theology or the study of religion in addition to pedagogical studies. I have had very little to do with the education of pastors, but many RE teachers have participated to my courses. I used to work at the University of Turku where there is no theology at all, whereas my permanent position in the study of religion at the University of Helsinki is in the Faculty of Theology (and study of religion is administratively divided between the Faculty of Theology and the Faculty of Arts).

More generally, it may be interesting to know that there are practically no private universities in Finland and few private schools. Therefore, when I talk about Finnish universities and schools I am talking about publicly funded ones. Studying is free for Finnish citizens and for people from European Union countries. Small tuition fees were recently introduced for students outside European Union.

Q: What sorts of courses are you teaching this year?

A: I teach on all levels. At the moment a big portion of my teaching consists of seminars for MA and PhD students, but I teach two other courses – ‘Approaches to the Study of Religion’ is already finished for this year and ‘Religion in Public Life’ begins in January.

‘Approaches…’ is for the second or third year students and it is one of my favorite courses. It consists of two parts. First we focus on general questions such as what we mean by theory and method, what kind of theories and methods are there in study of religion, how data can be collected and analyzed and so on. The second part deals with selected approaches: sociology of religion, discursive approach, religion in popular culture, and cognitive study of religion, among others.

‘Religion in Public Life’ is a Master’s level course and it explores religion in the media and public sphere more generally. Last year the emphasis was on the media but next time there will be more about current conflicts regarding religious dresses in public institutions, for example.

Furthermore, I do some visiting lectures in courses such as ‘Rituals and Religion’ (Master’s level), ‘Introduction to Cultural Research’ (first year course) and ‘Philosophy, Science and Religion’ (first year course). My teaching changes a little bit from one year to another. In the Finnish system it is normal that courses can be quite short, typically anything between 14 to 28 contact hours.

Q: And, without giving away the topic of your upcoming Day Lecture, what has the study of religion got to do with pop culture?

A: I have never agreed with those who think that the study of religion is only about talking to people about their (religious) views and experiences. To me, the study of religion is not simply about studying religious people. The world is more complicated: all sorts of discourses that surround us have a significant effect on us, including our views on religion. Popular culture is one example of widespread and influential representations and discourses that constitute, maintain, and challenge our conceptions of religion and related categories. This is a short and simplified version of the main reason why I think popular culture is relevant for the study of religion and other disciplines/fields in humanities and social sciences. 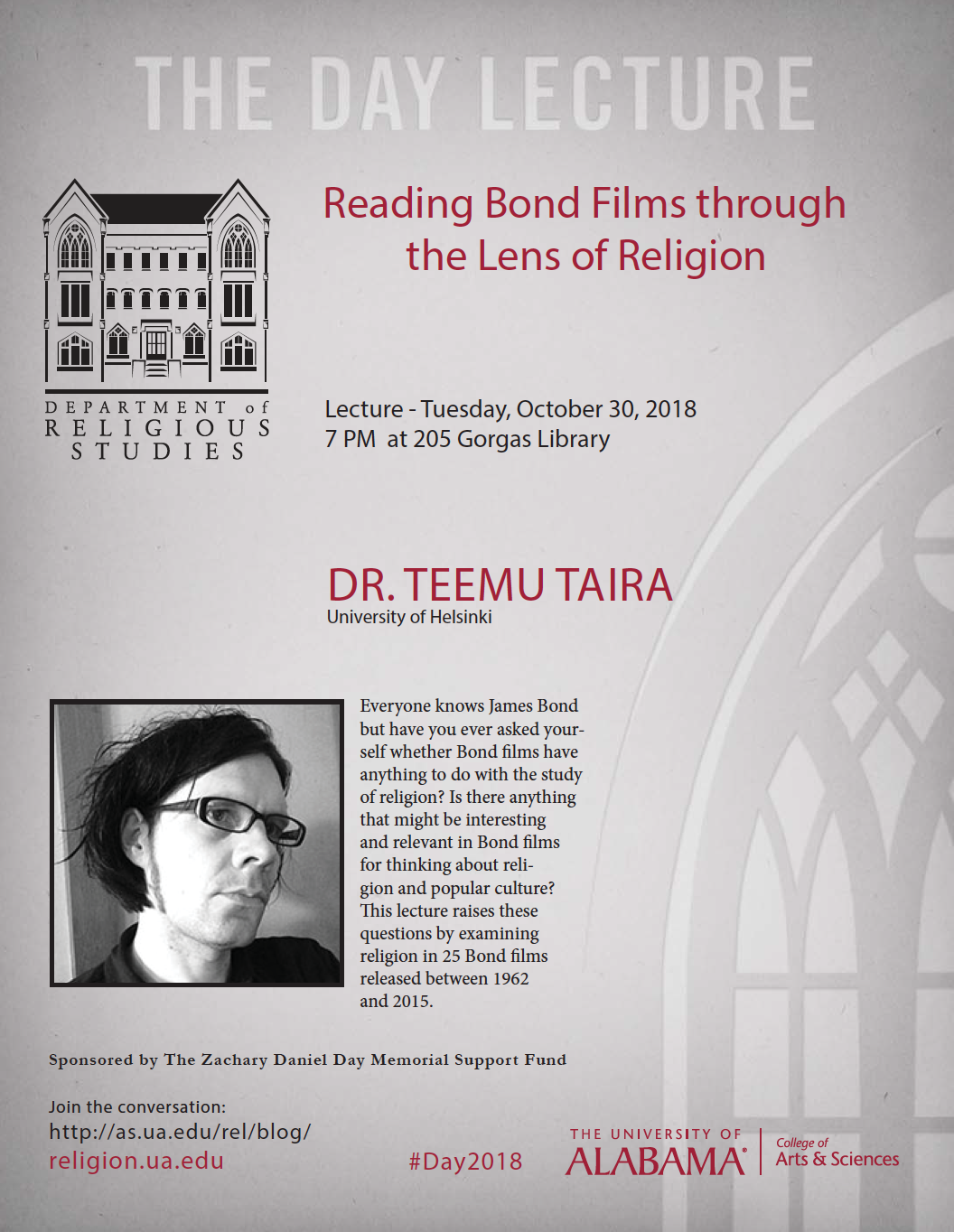