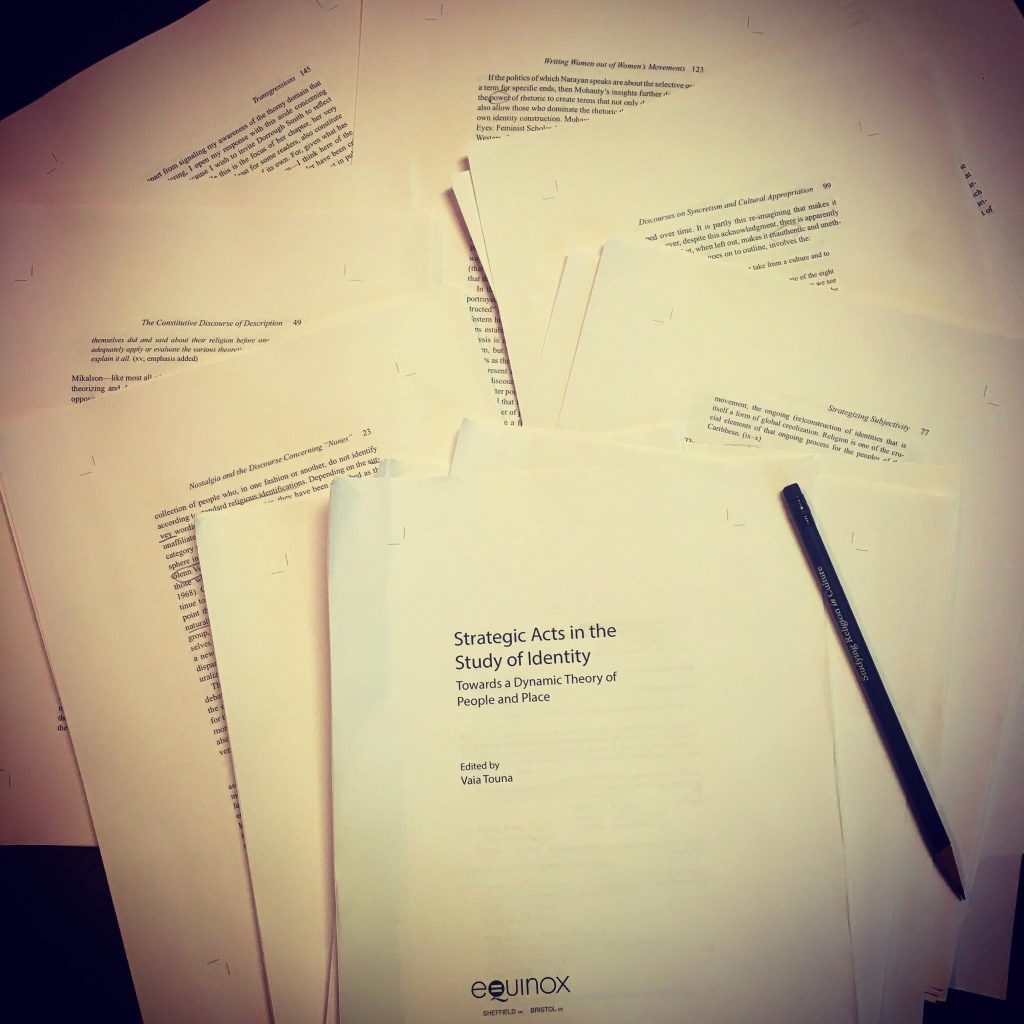 Culture on the Edge, a group of scholars studying acts of identity formation and centered here at the University of Alabama, has a new book forthcoming in its series, Studies of Identity Formation. This book, Strategic Acts in the Study of Identity: Toward a Dynamic Theory of People and Place, edited by our own Prof. Vaia Touna, is set for publication in January 2019.

The most interesting feature of this book is its layout, which is described in detail in Prof. Touna’s preface, “Show Your Work.” The book is divided into sections, featuring a preface and an introduction, three groups of essays focusing on acts of identification in separate data sets, and an appendix of short blog posts which originally appeared on the Culture on the Edge blog. Each group of essays is divided into three parts: (1) an initial essay written several years ago by a member of the Culture on the Edge group, (2) a critical review and response written by another member, and (3) a reply from the author of the first essay. Prof. Touna hopes that this call-and-response format will demonstrate the manner in which scholarship can and should become a group effort. The structure of academia and the very narrow focus of individual specializations and data sets can be isolating, but Prof. Touna notes that, when it comes to critical theory (such as studying operational acts of identification), groups of scholars can come together to push knowledge and scholarship forward, demonstrating how similar strategic operations can be consistent across vastly different groups. Additionally, the fact that the response essays were written several years later than the original essays in each group shows how scholars, their work, and their thinking change over the course of their careers.

The appendix of the book is perhaps its most unique feature, containing clustered groups of blog posts written by Culture on the Edge members before and throughout the development of the book. Prof. Touna selected these blog posts to demonstrate the ways in which scholars begin to tease out larger concepts for essays, articles, presentations, and books. The act of simplifying one’s ideas in the structured blog format and presenting it to the public allows the contributors and readers of the Culture on the Edge blog to engage together in discussing and developing new ideas in the field, much as a group of friends might pitch ideas to each other around a campfire. Scholarship does not occur in isolation, and in fact, the blog posts serve to bridge the gap between the “ivory tower” of academia and the general public we hope to serve through critical examinations of group formations. Taken as a whole, the book demonstrates the importance of peer review and critique, not in the sense of scholars attempting to one-up each other in their work, but in the sense of keeping a dialogue open among peers, students, and the public, in working together to overcome the challenges of critical scholarship and pushing forward toward innovative ideas in the field of religious studies.