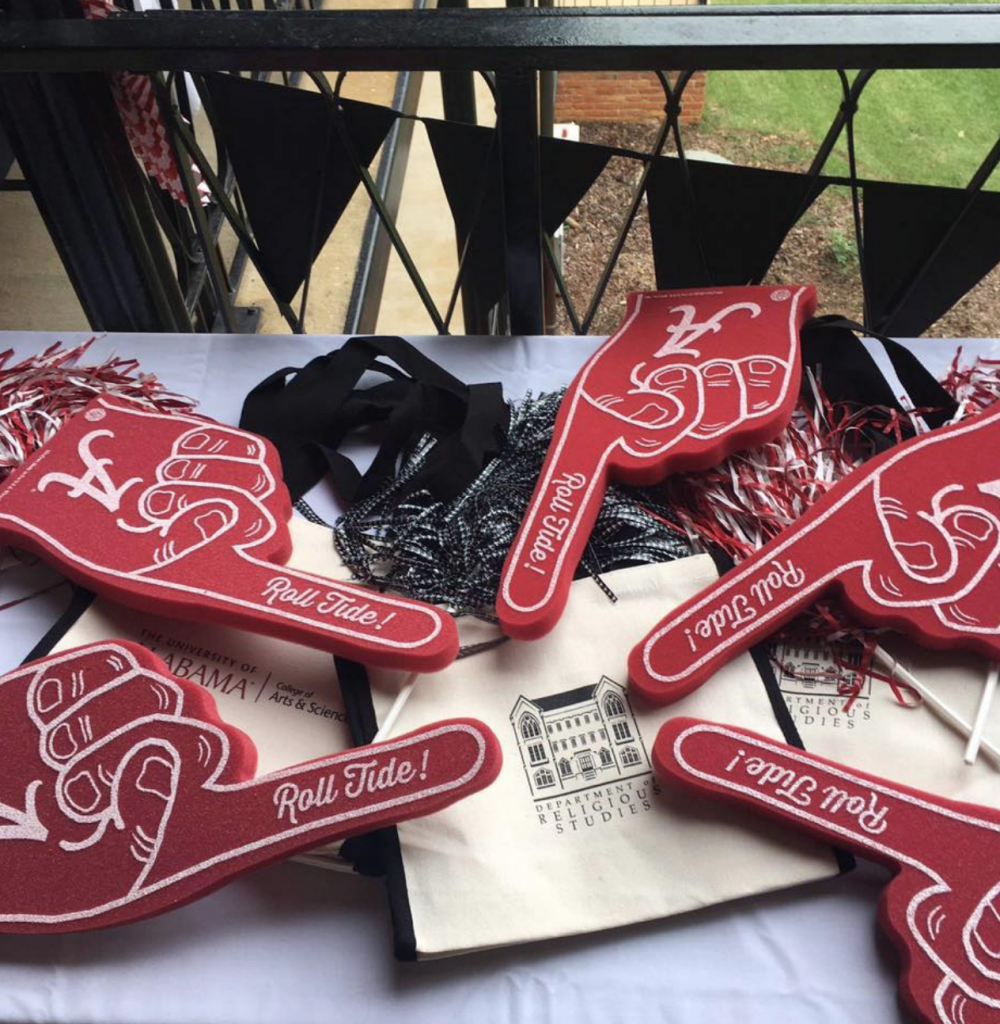 This weekend marked REL’s first homecoming bash on the balcony — we sent out invites to all alums for whom we have good mailing addresses and made sure our current majors & minors were in the loop. Our Alumni Liaison committee members were all there, as well as many faculty and staff members.  The result? We’d say that about 50 or 60 students, grads, family, and friends came by before kick-off, for some food, some stories and, yes, some pictures. 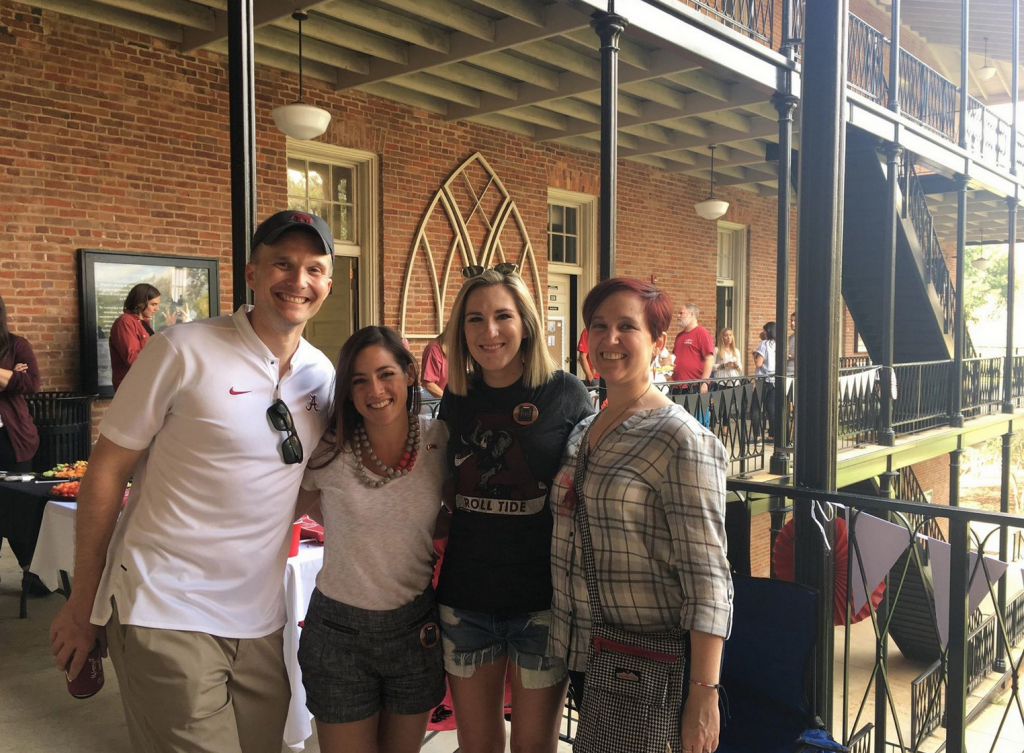 Above, our Alum Liaison Committee (left to right): Justin Nelson (2007), Jennifer Alfano Nelson (2007), Khara Cole (2013), and Kim Davis (2003) — beginning this year, they’re hosting Grad Tales and helping us to plan some events, so look for their annual careers workshop in the Spring. 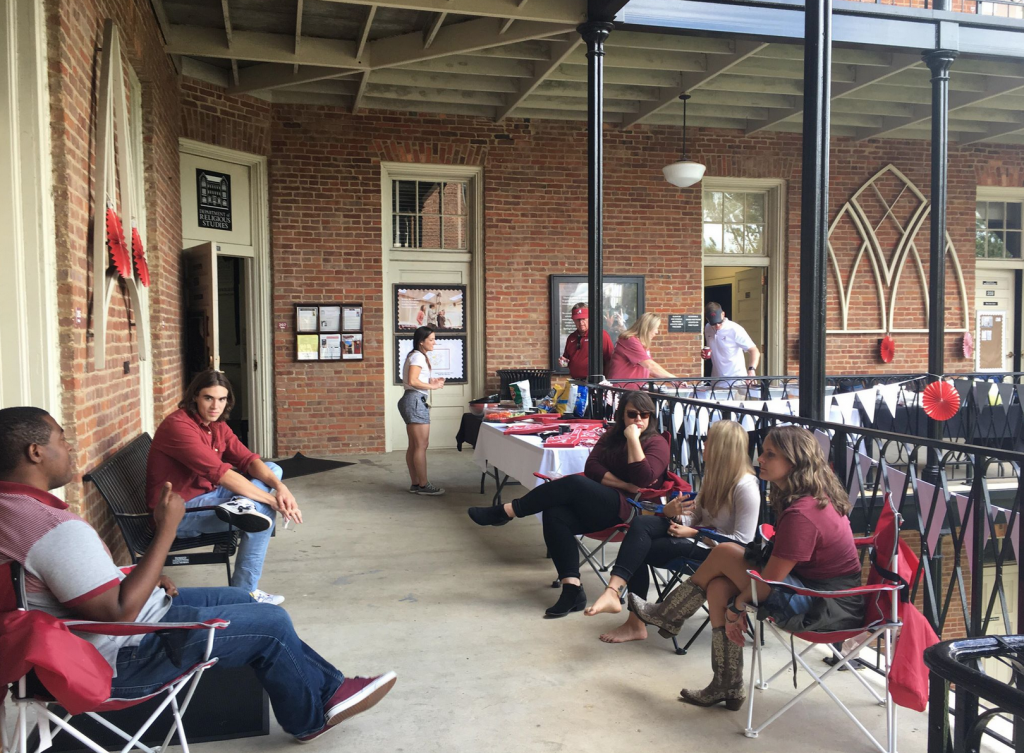 Profs. Richard Newton (far left) and Emily Crews (third from the left) are joined by the members of our student association’s executive: Kyle Ashley, Ellie Cochran, and Morgan Frick (all of whom helped us to set up — thanks!). 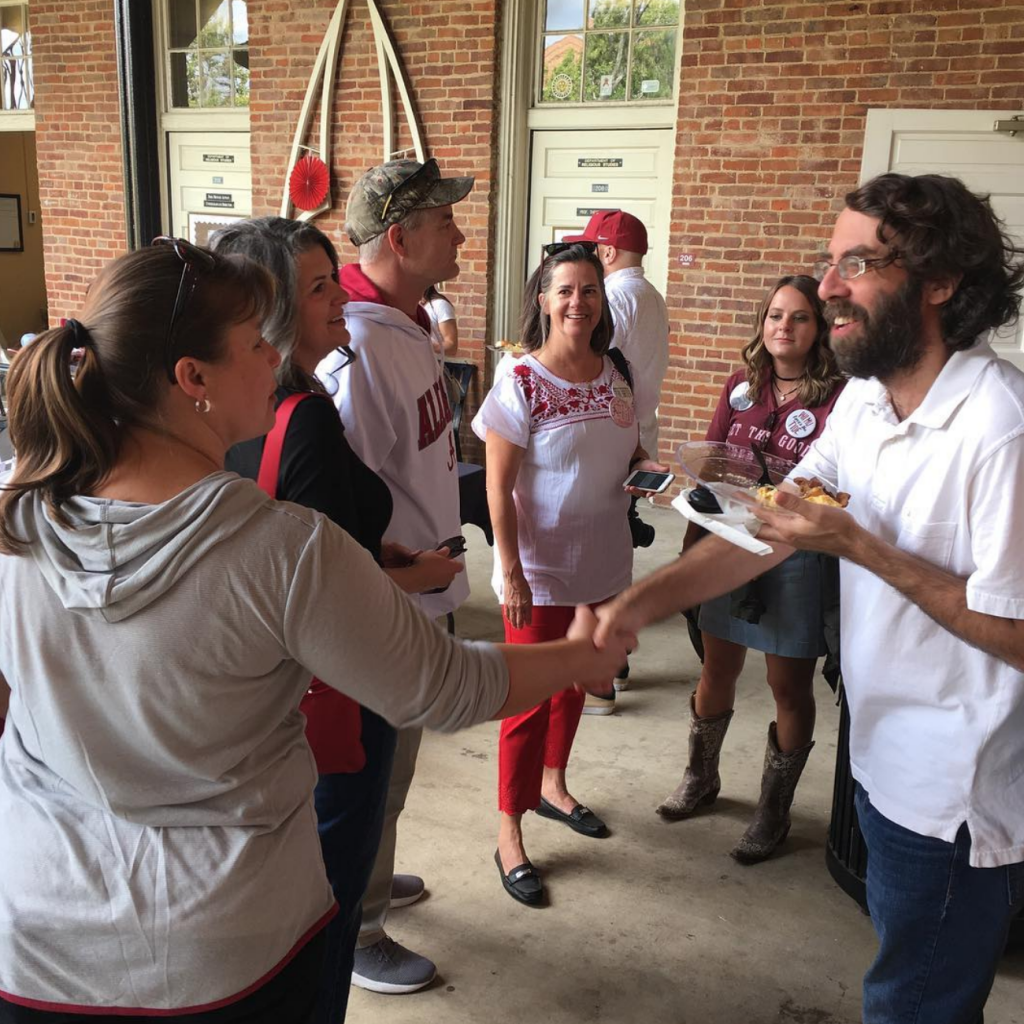 Prof. Ramey, right, meets Morgan’s family, one of several families who stopped by. 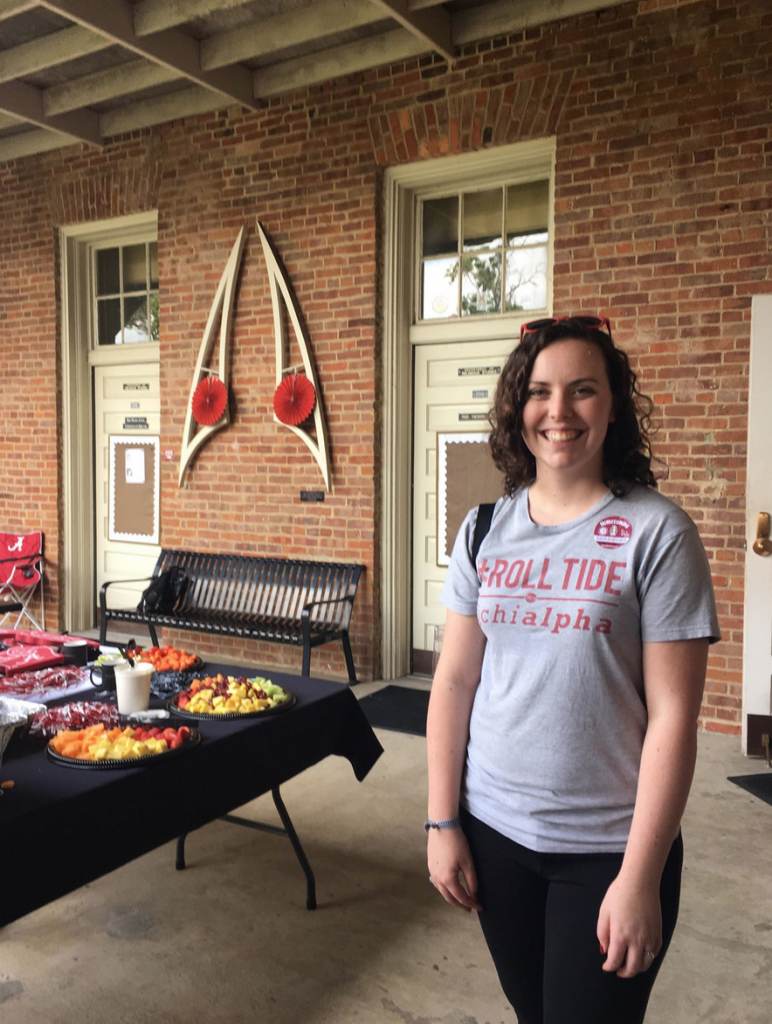 It was great to see Samantha Bush (a 2013 grad) back on the balcony — she was our guest at a Grad Tales event a couple years ago. 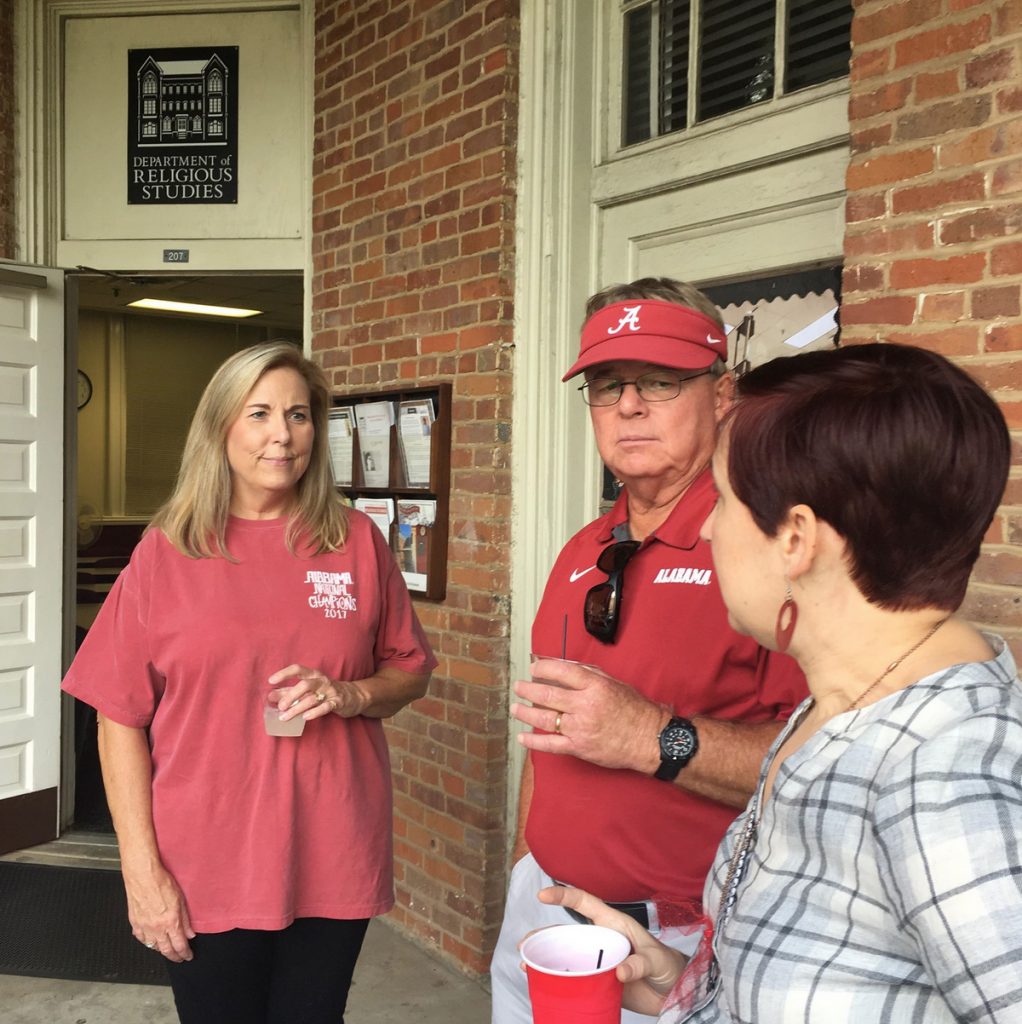 Yes, Betty was there, helping behind the scenes to run the show, and it was great to see Mike Davis, dad to no less than two successful REL grads. 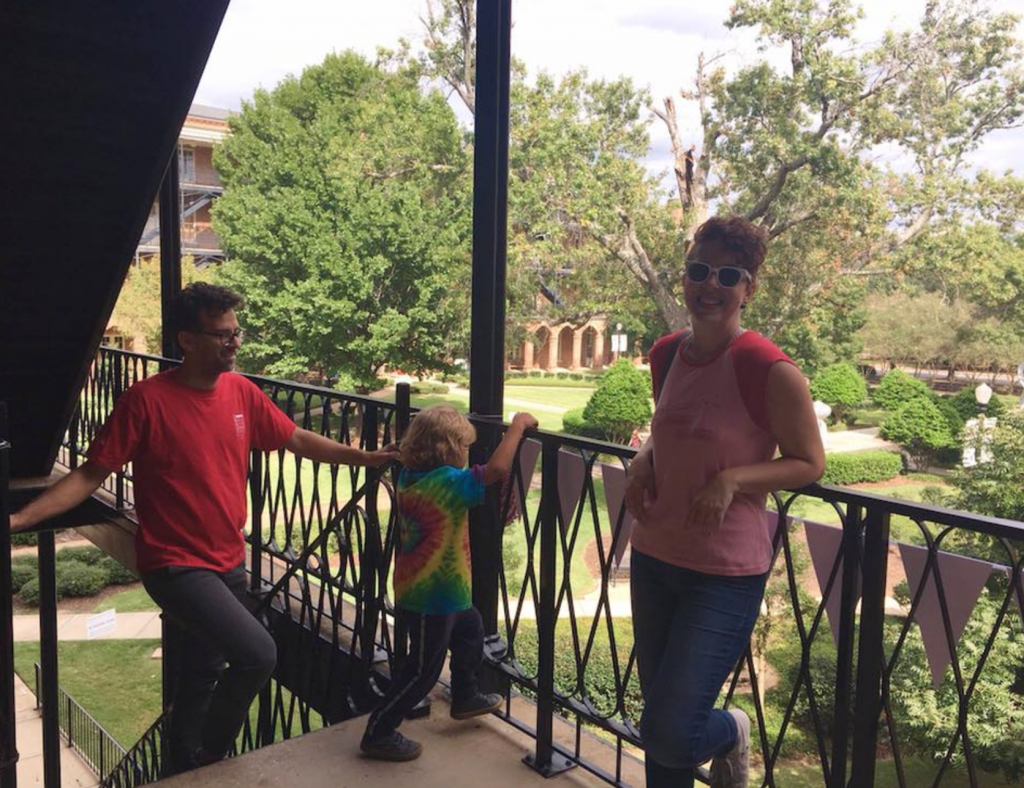 Profs. Loewen and Simmons were there and, of course Arlo, was too! 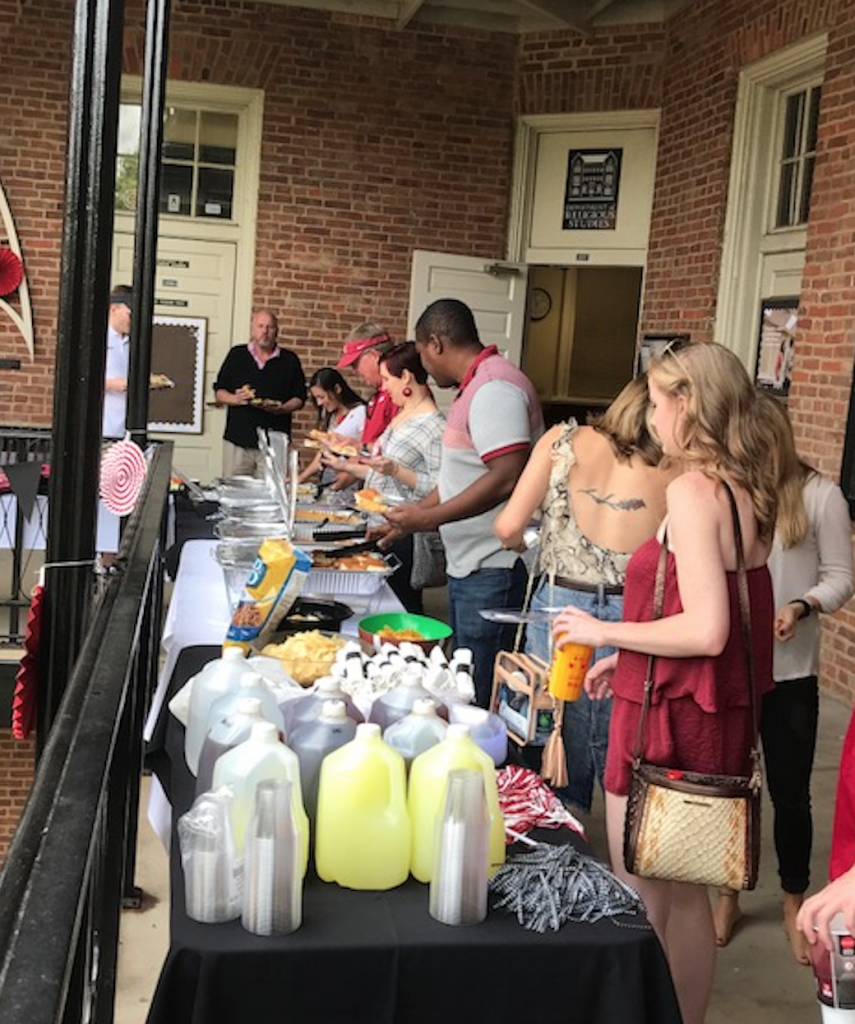 Nothing beats those little Cypress Inn buns with smoked chicken on them, right? 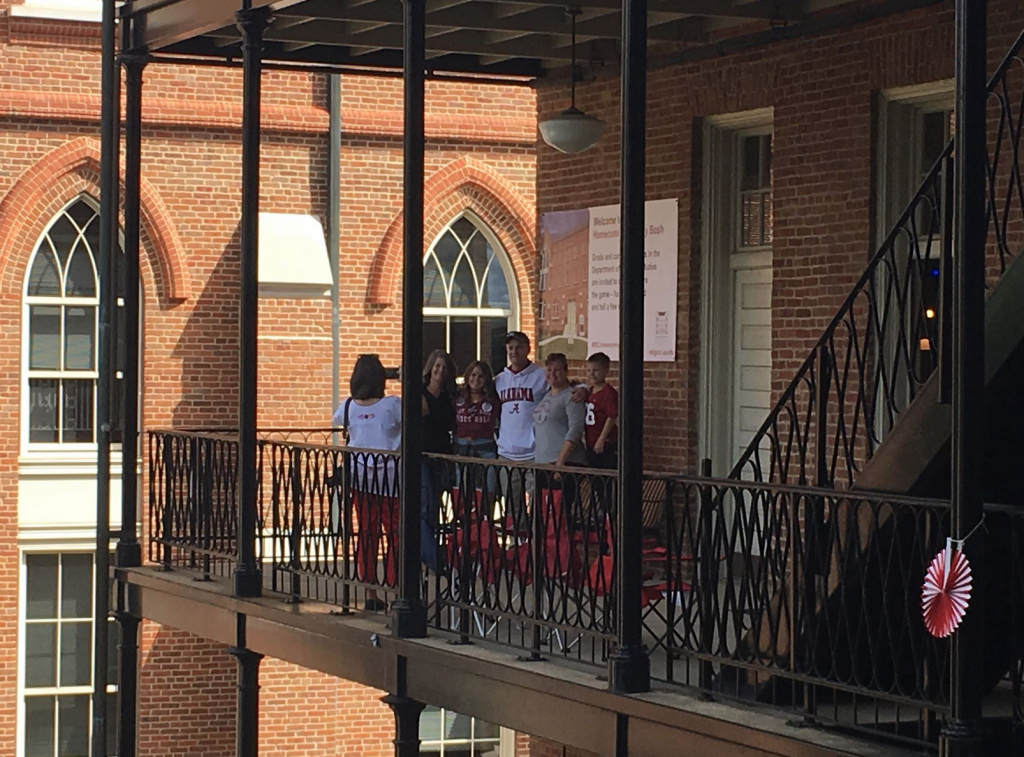 Did we say that a few pics were taken? 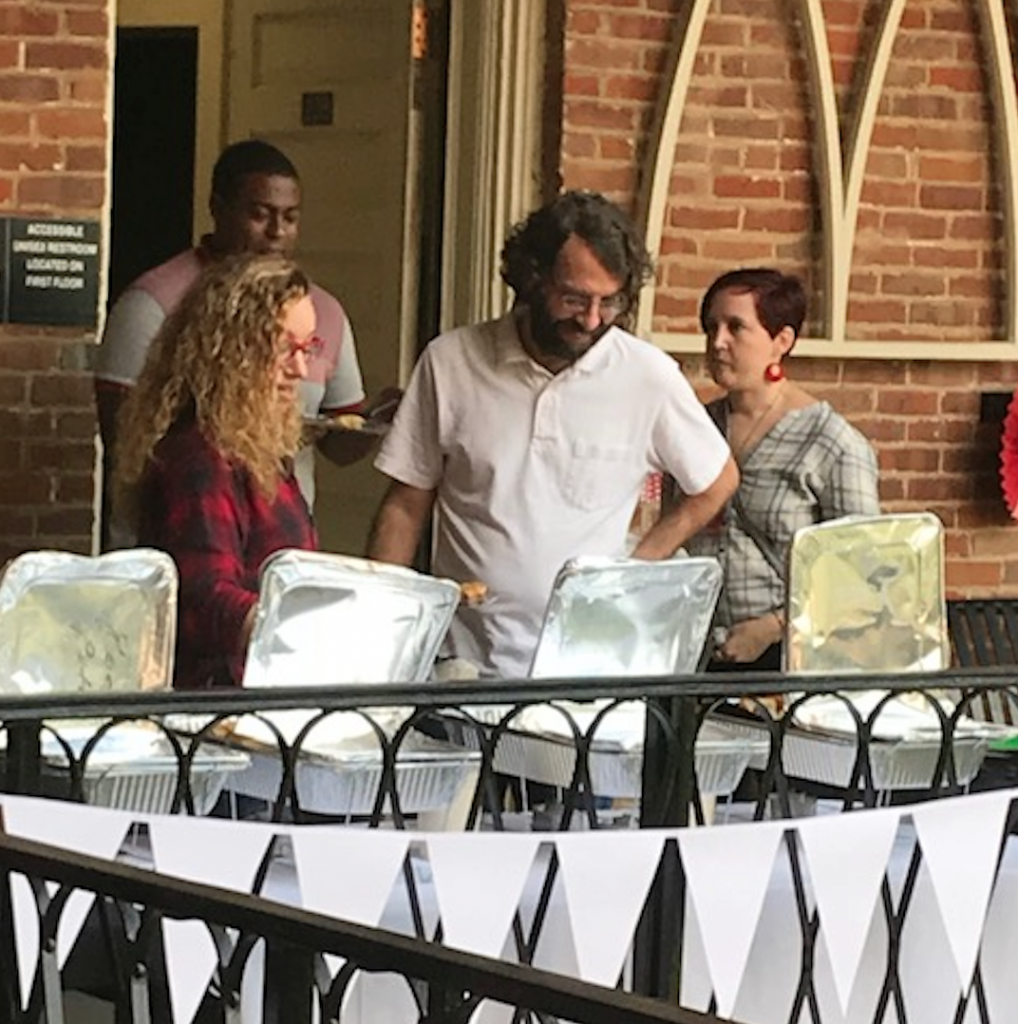 Prof. Touna (front left), our events coordinator and rep to the Alum Liaison Committee, made sure that no one left hungry and that the pennants were all up straight (though we think Kyle did some double checking too). 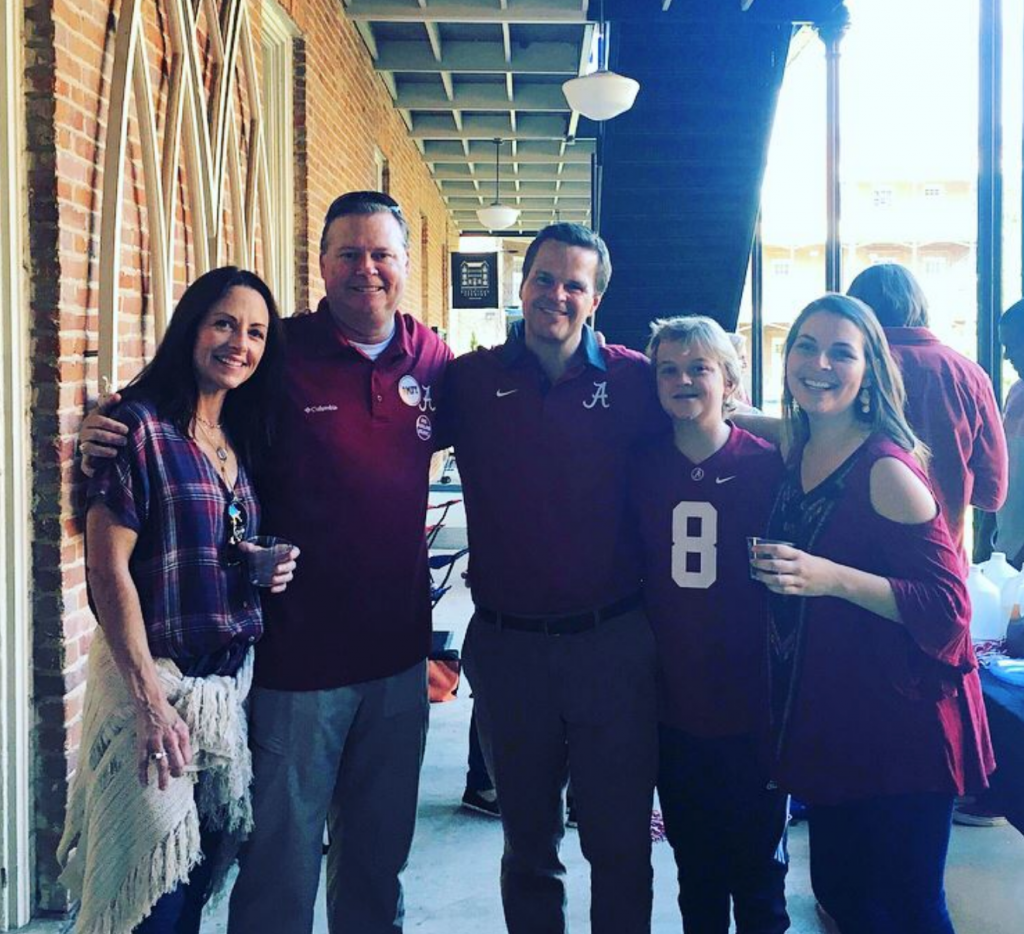 Keeley, far right, is an MA student and teaching assistant in the Department, and a BA grad as well, and so it was great to see her family stop by. 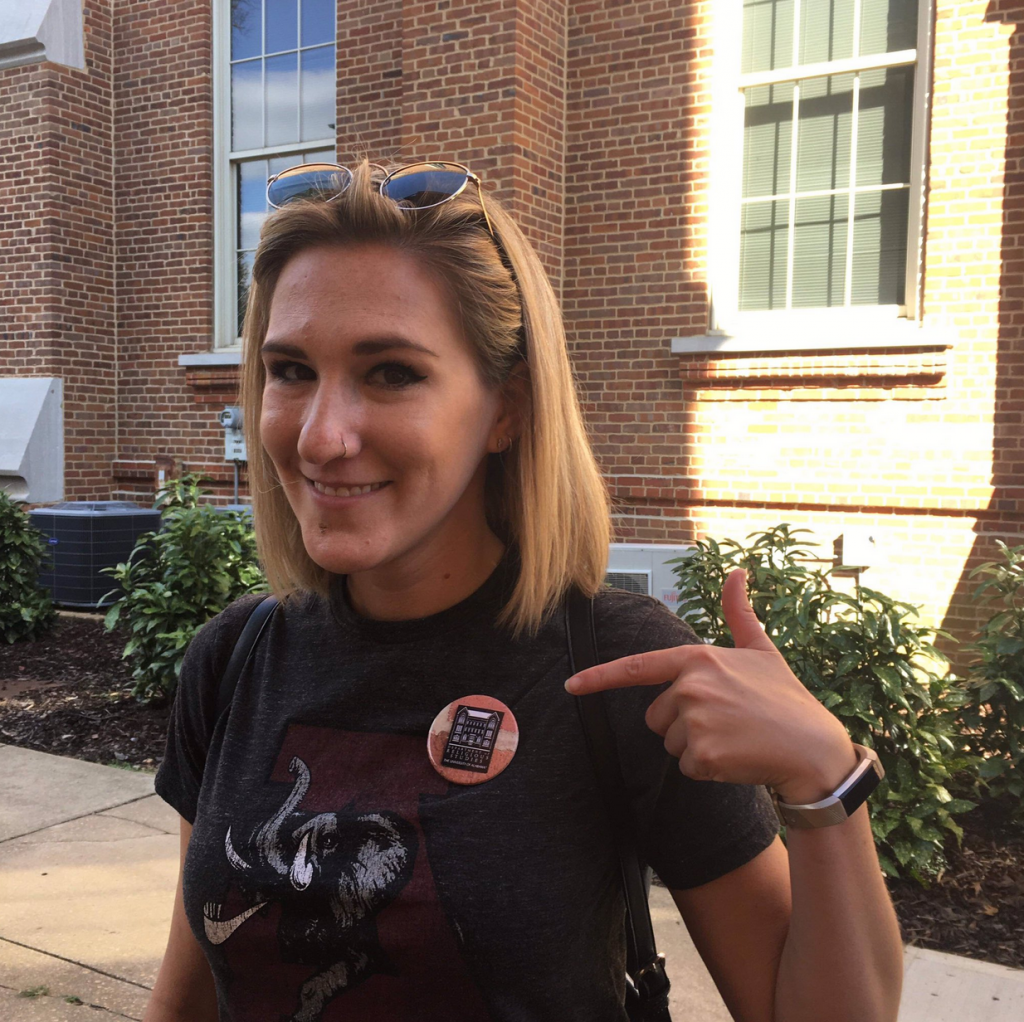 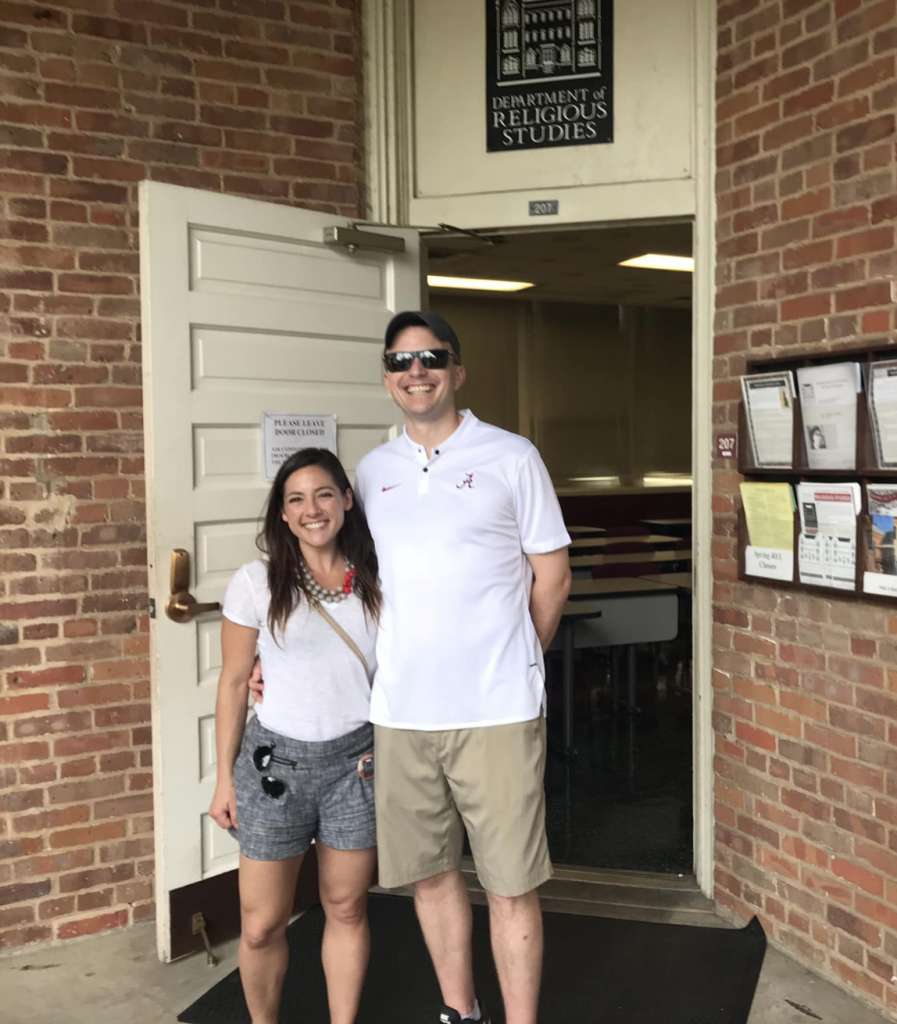 Oh, and did we mention that Jennifer and Justin, both REL majors at the time, met here and that they’re are now celebrating 10 years together…? 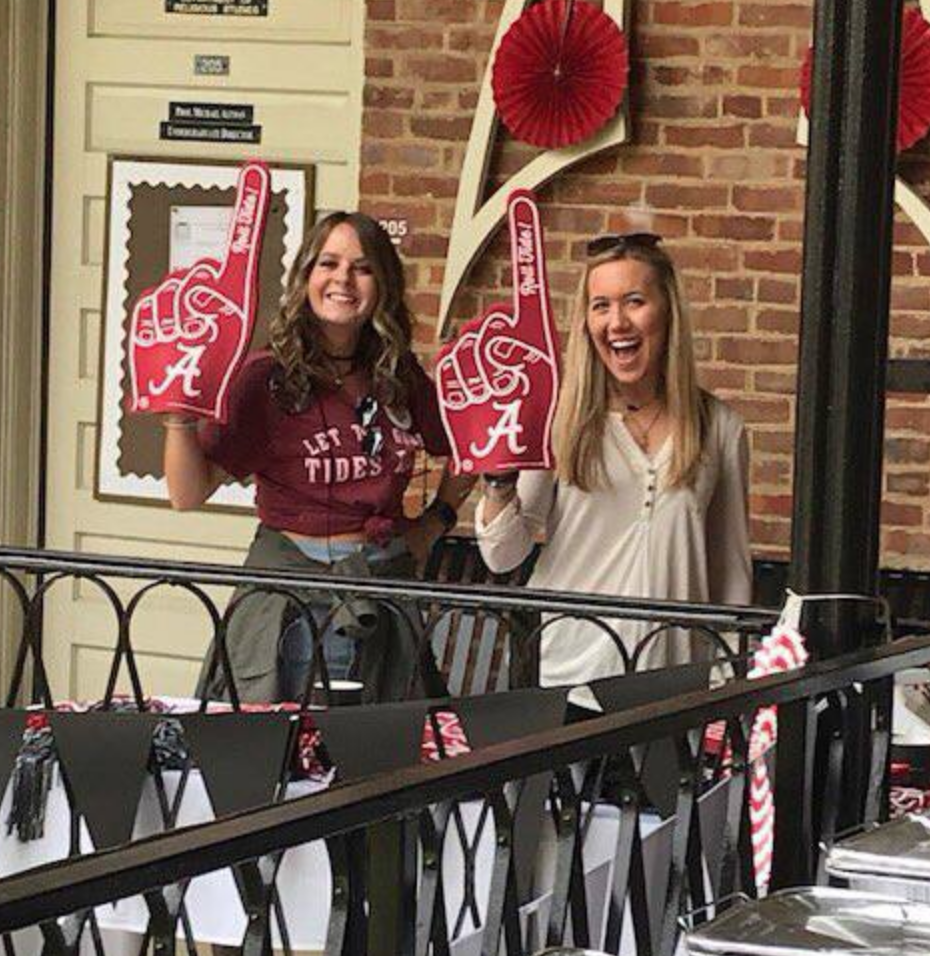 It looks like we’ve invented a new tradition.
See you next year!

Grads: drop us a line and tell us what you’re doing