Religious Studies  / Undergraduate Programs  / There and Back Again: A Grad’s Tale

“But what are you going to do with that degree…?” 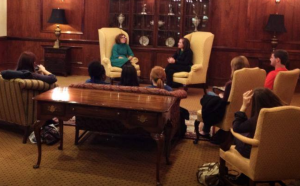 We know that you’ve heard that question — so we host an annual speakers series that brings a grad of our department back, at least once each semester, to talk about what they’ve ended up doing with their undergraduate degree.

The events are in the early evening, there will be goodies to munch on, and different professor hosts it each time, posing a series of questions to our guest as part of an informal Q&A, just to get things going.

And then that’s where you come in — so come with questions.

If you’re an undergrad who is unsure about your future or know that you might change majors at some point, then you’ll benefit from meeting some recent grads who
are doing all sorts of interesting things.

Kristin graduated in 2005 from the University of Alabama with a Religious Studies major and a Blount minor (Phi Beta Kappa). Today she is a board-certified Obstetrician-Gynecologist in Nashville area.

Chris graduated in 2008 with an REL major and a minor in Creative Writing. Now living in Los Angeles, he had been training dogs at The Zoom Room, though is now working for Wag, where he is Senior Customer Success Manager. But Chris is also pursuing a career in music, recently singing and playing Hammond Organ in the Jamestown Pagans, who recently released their first album. After graduating Chris also contributed to the REL blog (read here).

Jennifer earned a BA in English and Religious Studies in 2007 and went on to earn a M.A. in Education at UAB and taught middle school English from 2010-2017, and she is now a member of REL Alum Liaison Committee. While working as a teacher, she developed an interest in educational technology and software development and decided to learn to code, receiving a scholarship to Flatiron School’s Web Developer program from Women Who Code. She is now a software developer at Quantalytix, Inc. in Birmingham, AL. She also gets to combine her passion for education and technology as a Microsoft TEALS (Technology Education and Literacy in Schools) volunteer, co-teaching an introduction to computer science course at Tarrant High School.

Our Spring 2017 Grad Tales event is a part of the department’s 50th Anniversary celebrations and will be hosted by Professor Altman. We’re inviting a group of recent grads back for an evening of discussions.

Keli M. Brothers (formerly Vazquez) graduated with a REL minor and a psychology major in 2009 and is currently a doctoral candidate at Argosy University Online, and works as a Licensed Professional Counselor.

Kim Davis is a 2003 B.A. graduate in religious studies and French who also earned an M.A. in French applied linguistics and a master’s degree in secondary education in language acquisition in French (all from The University of Alabama); she currently teaches French and mythology at Tuscaloosa County High School.

Samantha Sastre graduated in 2006 with a major in REL and minored in English and computer applications while at UA; she is an inside sales representative for Gemu Valves in Atlanta, GA. She enjoys writing, cooking, a good beer, and the great outdoors.

Brett Saunders graduated in 2014 and majored in religious studies (with a minor in English). After living in Colorado post-graduation, Brett moved to Naperville, IL, where he now works for a non-profit Christian organization aiming to reach junior high and high school students.

Lexi Poston earned her B.A. in 2015 with a triple major in religious studies, criminal justice, and international studies — and a triple minor also— at the University of Alabama. During her time here, Lexi was actively involved in RSSA, even serving as an officer. After graduation, Lexi decided to continue her studies at UA and earn a master’s degree in criminology and criminal justice, concentrating on issues of hate crimes, prejudice, and genocide. She’s currently finishing up her first year of graduate studies at the Capstone. After she graduated, Lexi wrote a piece for our blog describing some of the ways in which the critical thinking skills she learned in REL have helped in grad school, which you can read here.

Andrew Grace is an independent documentary filmmaker whose films have aired on public television stations and at film festivals across the country. His film Eating Alabama won the James Beard Award for Best Documentary in 2014, and his recent work includes the interactive documentary After the Storm, which incorporated innovative graphic/web technology into the filmmaking process to tell a story about the 2011 tornado that devastated parts of Tuscaloosa and Birmingham. In the University of Alabama Department of Journalism and Creative Media, he teaches and oversees the interdisciplinary social justice documentary program called Documenting Justice. You can find his faculty page here.

Khara Cole earned her B.A. in religious studies and public relations in 2013 at The University of Alabama. Since graduating, Khara has taken a job as an associate product manager with Blue Cross Blue Shield of Tennessee while also pursuing an MBA from the University of Tennessee at Chattanooga. She sees a need for critical thought in today’s business world, a skill which she says REL provided for her during her undergrad years. So come out to here how Khara is applying her critical thinking skills in both pursuits.

Read blog posts by Khara: One of These Things is Not Like the Other, But Don’t They Quack the Same?

Hannah Hicks earned her B.A. in Religious Studies and Philosophy in 2013 at the University of Alabama.

Since graduating, Hannah has been studying at the University of Alabama School of Law here in Tuscaloosa, where she is interested in issues of social justice. Hannah cites her time in REL as a major factor in leading her to public interests law.

After she graduated, the University wrote a feature on Hannah, which you can read here.To watch a video of Hannah discussing her time as an undergraduate, click here.

Dr. Mike Altman earned his Ph.D. in American religious cultures from Emory University in 2013. He was hired in our department as an Instructor in fall of 2013 and began serving as an Assistant Professor in the 2014-2015 academic year. Learn more about Dr. Altman here.

Dr. Altman’s areas of interest are colonialism, theory and method in the study of religion, media studies, and Asian religions in American culture. Trained in the field of American religious cultures, he is interested in the ways religion is constructed through difference, conflict, and contact.

For the final Grad Tale of the year, REL undergrad Anna Davis interviewed Dr. Altman about his time as a student, and how the skills he learned have transferred to his academic career.

Samantha Bush dual-degreed to earn her B.A. in religious studies and psychology and B.S. in human development and family studies in 2013 at The University of Alabama. After graduation, she worked at Child Abuse Prevention Services of Tuscaloosa, where she was a parent educator and Director of Service Delivery. She and her husband recently moved to Hoover, where she now works as the Office Manager at Passport, Inc., a national nonprofit that runs youth summer camps.

During her time in REL, Samantha was actively involved in the RSSA, and gained some great practice with social media while creating the monthly dinner events!

Ben Simmons graduated in 2009 with his B.A. in religious studies and history. He is the co-founder of Bear Face Media, a web development and eCommerce company. Ben manages its day-to-day operations and develops web applications for Fortune 500 companies. He, his wife Anna, who also attended UA, and their son Albert, live in Daphne, AL.

Read Ben’s blog post on his time in REL.

John Lyles earned his B.A. in Religious Studies with a Biology minor in 2010 at the University of Alabama. After graduating from UA, John enrolled in medical school at The University of Alabama, Birmingham (UAB) where he is currently finishing his last semester. He has completed his interviews for a pediatrics residency and will graduate this May 2014. During his time in REL, John was the President of the Religious Studies Student Association as well as the bulletin board designer extraordinaire. It’s transferable skills like those that help you get into med school!

Kim Davis earned her B.A. in religious studies and French in 2003 at The University of Alabama. She then earned an M.A. in French Linguistics (2007) and master’s in secondary language pedagogy (2010), also from UA. While enrolled in REL Kim staffed the main office as a student worker — one of many students who has helped out while earning their degree. Kim now teaches French and mythology at Tuscaloosa County High School.

Read a blog post by Kim about the relevance today of her work in the study of religion.

Tim Davis, our second Grad Tales guest, earned his B.A. in religious studies and Spanish in 2006 at The University of Alabama. After teaching high school Spanish for two years, Tim returned to earn his J.D. at the University of Alabama’s School of Law, also spending a semester studying law in Vermont. Although specializing in environmental law, Tim is now practicing law, with an emphasis in civil litigation, in St. Clair County, AL. You can also find him looking dapper on the quad most any game day.

Read Tim’s blog post on the academic study of religion.