Thanks @McCutcheonSays for this mention of my online syllabus, in his discussion of Janet Jakobsen’s piece on relhttps://t.co/EkJiVE3hPM

Malory Nye’s tweet, the other day, got me thinking… So I replied: 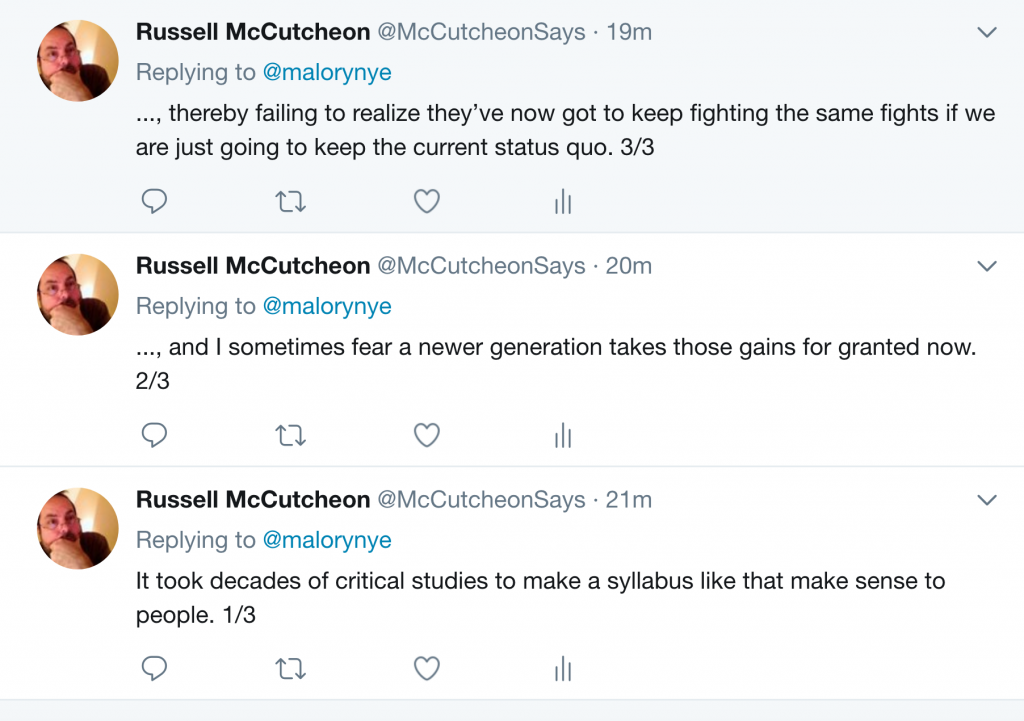 For a while, now, I’ve had this feeling: as happens with any new and successfully reproduced social developments (or what advocates just call advances), newcomers to the group tend to normalize them. Which is a wonderful luxury, if you think about it — in fact, it’s likely among the things the earlier generation worked toward: the right of subsequent members to take things for granted that their elders could not.

“Of course we ought to have a course on theories of religion” someone might now say in our field, or, “Sure, naming something as ‘religious’ is worthwhile studying.” Why? Coz “#classificationmatters” they my tweet in reply. But the risk of normalizing such gains is that we fail to see them as the accomplishments of historical actors, in prior situations where this was not the case.

Situations which could easily return if more energy is not re-invested, i.e., if critical replies don’t chase articles that strike you as problematic.

For I’ve been in the game long enough to have clear memories of people the generation ahead of me (who are now retired or near to it) reporting how they’d lost jobs for explicitly theological reasons, or to remember the almost complete absence of courses that examined theories of religion. (Interpretations of religion — since it’s an inherently and deeply meaningful thing that defies explanation, of course — was all that counted as theory in many places.) I’m hardly unique in having these memories, of course, and I’m sure some readers could offer some of their own (hint: comments section…), but I sometimes wonder if younger generations of scholars, who might now take certain gains for granted, realize just how close we are, historically speaking, to a time when the version of the field to which they may have become accustomed was not just controversial but actually unimaginable.

Case in point: although I inherited many of the hard won gains of the generation ahead of me, I recall the the time, early in my own career, when I was privately advised to replace the word “theories” with the word “approaches,” so as not to raise eyebrows in the Department where I then worked. And then there was the time, in yet another Department, when I was told to add the late Peter Berger to my syllabus, to satisfy a senior faculty member who apparently considered his work as setting the limit for what counted as a theory in our field. These are but two moments — seemingly subtle, to be sure — where advocates for the then dominant model of the field pushed back, and did so from positions of considerable power, as compared to where I was situated at the time. Prior to that, I recall our own graduate unit declining to support MTSR in its earliest years (back when small donations from Departments and individuals funded what was then a grad student invention — find the inside jacket info from those first issues to see who did) as well as being seriously called on the carpet, once I was working, for having grad students look at the variety of intro syllabi in my own Department, as prep for the course they themselves were going to teach; I was fomenting dissent, I was basically told. I guess it was feared that I was going to turn the students to the dark side.

And if you think these are tales from a bygone age, I even know people told today that some Departments would never hire anyone who does the sort of theory work that some of us now do.

It’s easy to look over Nye’s syllabus and overlook the battles that were fought just for some of those things to be written and get into print let alone to be read and taken seriously — or added to a syllabus. That they are today is, from where I sit, great. But each of those pieces, each of those gains, needs to be historicized, I’d suggest, so that current readers who are sympathetic with this approach, and who wish it to continue and maybe even advance it a little more, understand that the baton is coming to them — in fact, maybe it’s already in their hands. For, as that last anecdote makes clear, despite a few decades of critical scholarship, all you have to do is pick up many peer-reviewed journals in the field today or browse a few publishers’ catalogs, let alone look over an annual conference program book, to realize how small those gains are when compared to the majority of work now being carried out.

After all, despite some having no time for the world religions category, seeing it as a relic leftover from the colonial era, it still dominates not just intro courses but the way in which the entire field is conceived and practiced. And despite courses on theories of religion now being out there, few are required of majors and minors, and we all know that the now ever-present method & theory courses in grad school are often seen by students as a rite of passage to endure and to just get behind you, so that you can get to the real religious stuff that you came to grad school to study.

So Nye’s syllabus is quite interesting to me, but for more reasons than might at first be apparent.

One thought on “Looking Over and Overlooking”