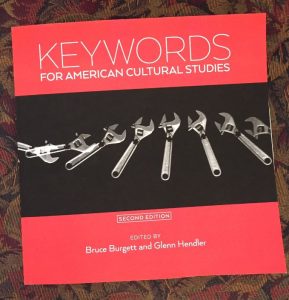 So I flipped to the contents to see if “religion” was in the mix and, seeing it there, I turned to Janet Jokobsen‘s entry — assuming I’d find the usual brief essay on religion in America or some such topic. Maybe the religion of baseball. Or something about how evangelicals vote today. For although I know some of her previous work (e.g., Love the Sin, written with Anne Pellegrini or their co-edited book, Secularisms), in many cases I find that scholars who do interesting work elsewhere revert to truisms when they turn their attention to religion, or when scholars of religion write for wider audiences.

What a pleasant surprise I had.

The article is all about naming something as religion, how that act of naming is linked to the other pole in that binary, secularism, and the practical implications of naming (and the interests that drive it). “This shift in perspective,” as she calls it in her closing paragraph, is one that a number of us in the field have made, sure, as is very nicely evident in Malory Nye’s syllabus for his new course…

…, but it’s particularly nice to see this admittedly small (but I’d still say significant) part of the field represented to those outside it — such as that broad, cross-disciplinary group who do that thing we call culture studies.

So that just goes to show what happens when you assume….