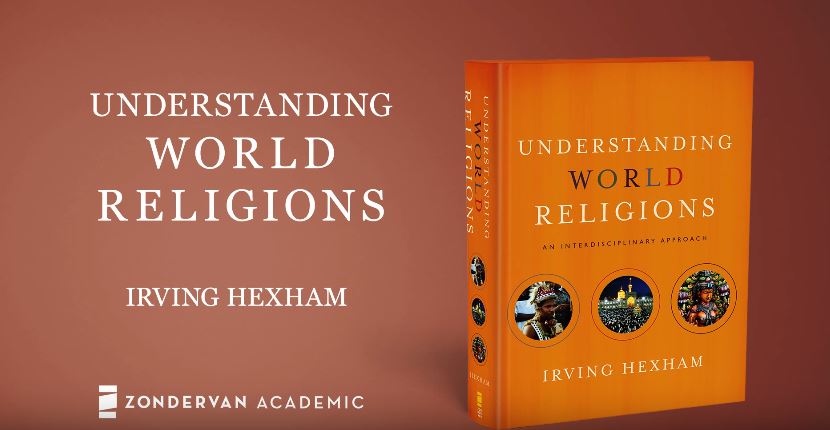 The other day I came across this video, from a publisher advertising a recent textbook on world religions.

The author being interviewed, Irving Hexham, is a prof at the University of Calgary’s Department of Classics and Religion, and the video is posted as the conclusion to a series the publisher made (for example, see his discussion on his preferred term, worldview — at least when understood properly, he argues, and apparently when used by Christians to understand others) to advertise what was then his new textbook.

The video, the last of that series, is worth watching, I think, especially for those who think the study of religion has turned a corner, and is now somehow “post-theoretical”; for to anyone acquainted with the history of the field, his emphasis on description and the seeming self-evidency of empirical data and history, on the primary need for scholars to understand the insider’s perceptions, on belief as a causal agent, along with his criticism of the groundless, speculative (dare I say navel-gazing) nature of theory, his emphasis on interpretation over explanation, and his equation of theory with criticism, etc., will all sound rather familiar.

For example, see the concluding paragraph, below, from the article (which is a chapter [p. 193 ff.] in an edited German volume on violence and Christian missions) that he cited early on in that video:

To be honest, this all sounds like the issues we were discussing in grad school almost 30 years ago.

All of which either suggests that the field hasn’t moved that much or that it’s moved more than we realize and some of its members are working very hard to undo those changes.

Oh, and one more thing: at least our Department is doing ok. Sure, there’s challenges and none of us can afford to take anything for granted — and by “us” I mean professors from all across the humanities — but Hexham’s portrait of the field as not necessarily having a future (let alone his claim that theory has played a role in that) isn’t really recognizable to me. I suspect he’s either generalizing about the field from some specific experiences or lamenting the lost dominance of the Verstehen model that he seems to favor.

So take a look at the video and see what you think of his characterization of the field today and the future it might have.

2 thoughts on “The “Tyranny of Theory” is to Blame”