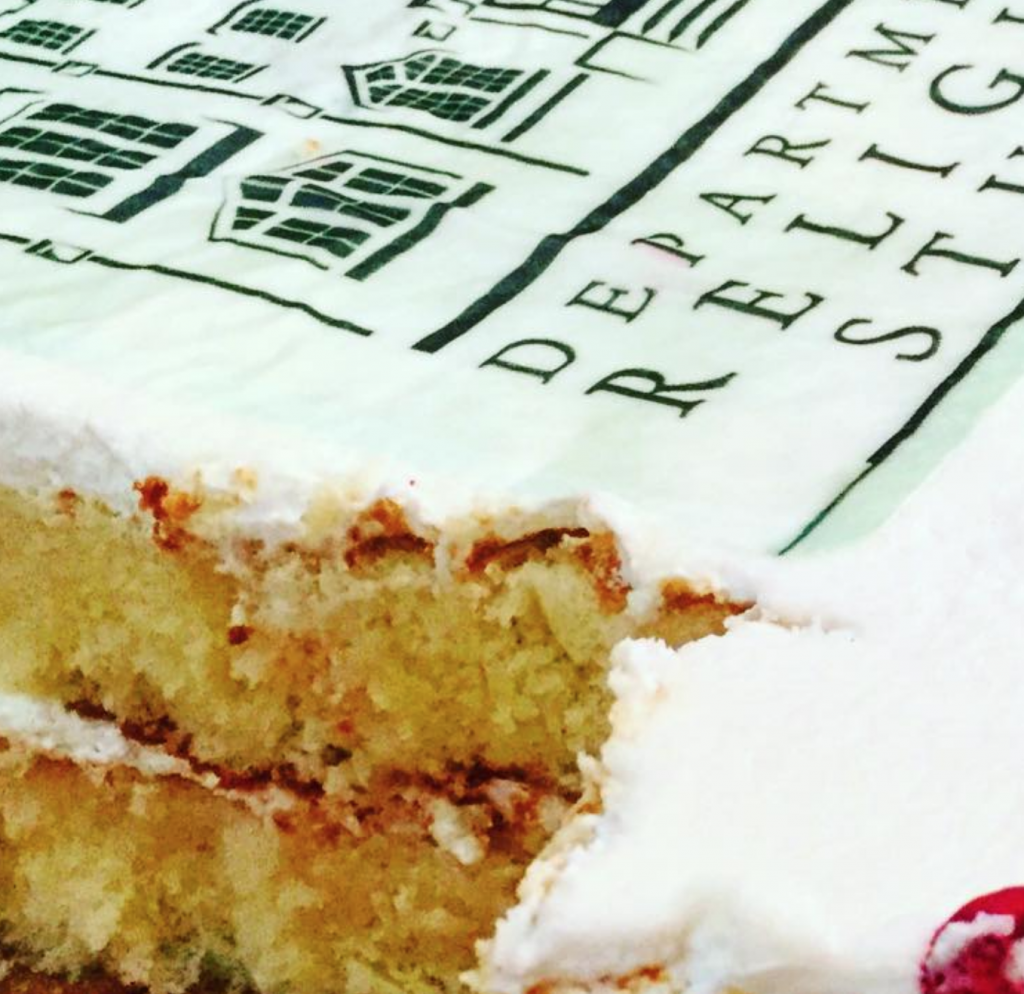 We filmed parts of it (i.e., the two faculty lectures, by Profs. Altman and Trost, and the opening to the next night’s Grad Tales panel — featuring five grads who returned to help mark the occasion [scroll down here to see who they were]); these movies are now being produced in the main office. They’ll probably be posted in a few weeks.

An interesting thing happened along the way to celebrating our 50th — we had a UA grad from the 1950s, who went on to become an engineering prof himself, at another university, and who read UA’s story on our anniversary (click the image below to read it). He contacted us to suggest that his undergrad classes at UA, with a Prof. Fischel, indicated that we were well beyond 50 years old by now. 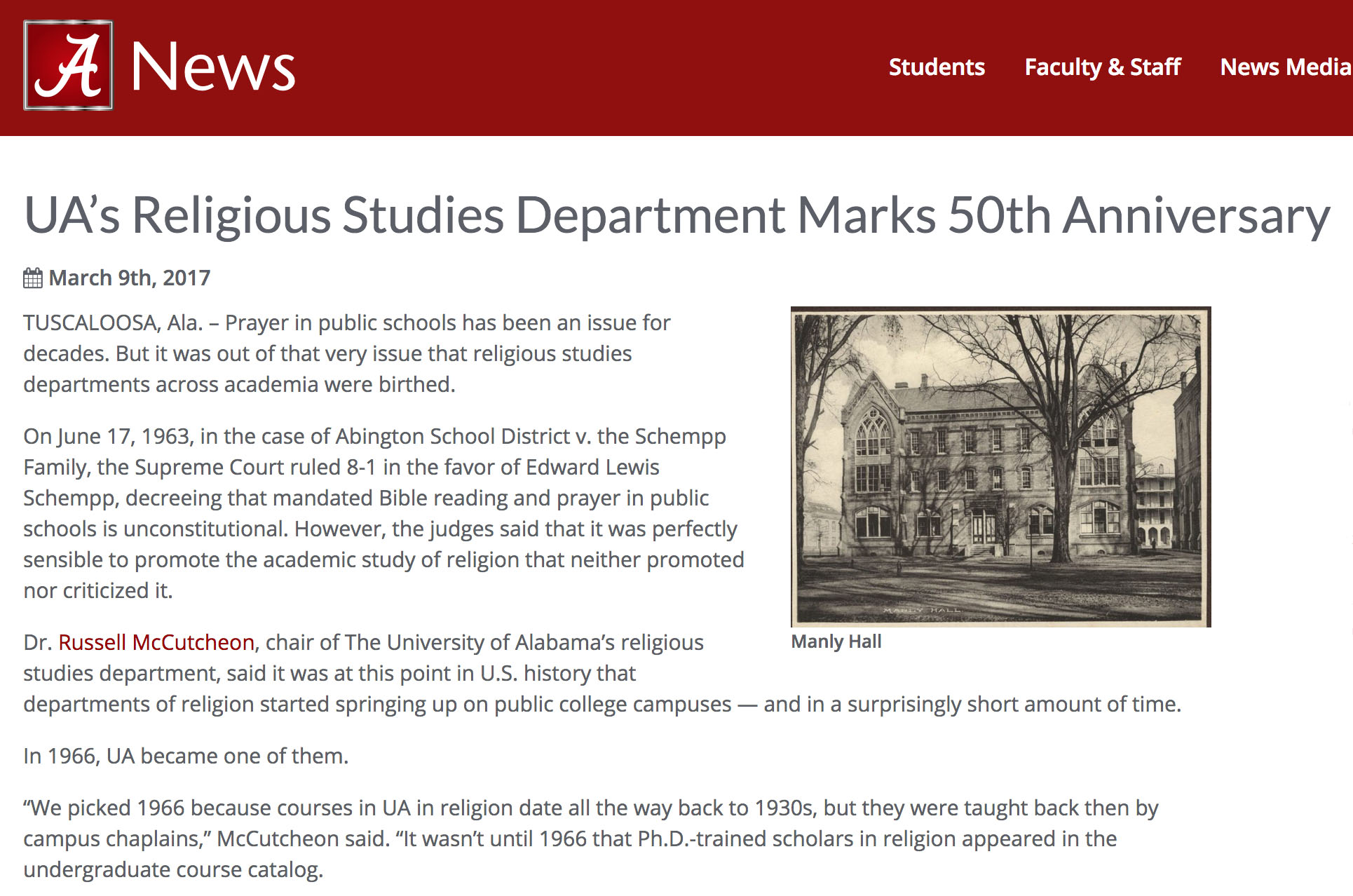 What a great example of how contestable claims of origins are!

The logic for this being our 50th was outlined in a post I wrote a while back; to sum it up: yes, courses on religion date back to the 1930s (and, in fact, based on Prof. Altman’s research, to the very origins of the university in 1831, when the first President, Alva Woods, taught a course on proof for Christianity [look for the faculty lectures movie to hear what Altman discovered in the archives]); but the academic study of religion, as taught today in public universities, only dates to the mid-1960s. You can read the above post, to see why we then narrowed it down to 1966-7, but the email from the alumnus was a great moment to make apparent something we teach in our classes: tales of origins tell us about the one spinning the yarn and are not in some sort of one-to-one step with a stable, self-evident past.

For all you have to do is change the criteria in the present and a different past stands out as the beginning.

His email was also a great opportunity to learn about someone in our Department’s distant past — before there was a Department, in fact, since courses on religion back then were offered through the Department of Philosophy. Lucky for us, when we heard this news, Prof. Trost did some digging of his own, so you can learn more about Prof. Henry A. Fischel (who left UA for Brandeis, in 1958, and then moved to Indiana University in 1961, where he had a long career) once the video of his lecture is posted. (Interested in what Fischel worked on?)

So, the cake is all eaten (yes, we had cake — and lots of it), the punch has all been drank (have you heard how much I love this fizzy pineapple punch?!), and those who so kindly joined us from afar are probably all home by now. As for us, we’re getting ready for Honors Day (this coming Friday); but that doesn’t mean that the milestone of at least 50 years of studying religion at UA is out of our minds. In fact, we’re pretty optimistic about the future of the study of religion on our campus — enough so that we’re now introducing a new hashtag: #REL75th. There’s a time capsule full of goodies that we’re hoping someone opens on that occasion (which happens to make the point that the future, and not just the past, is equally imagined in the present). It’ll soon be bolted to a shelf in the Department library. 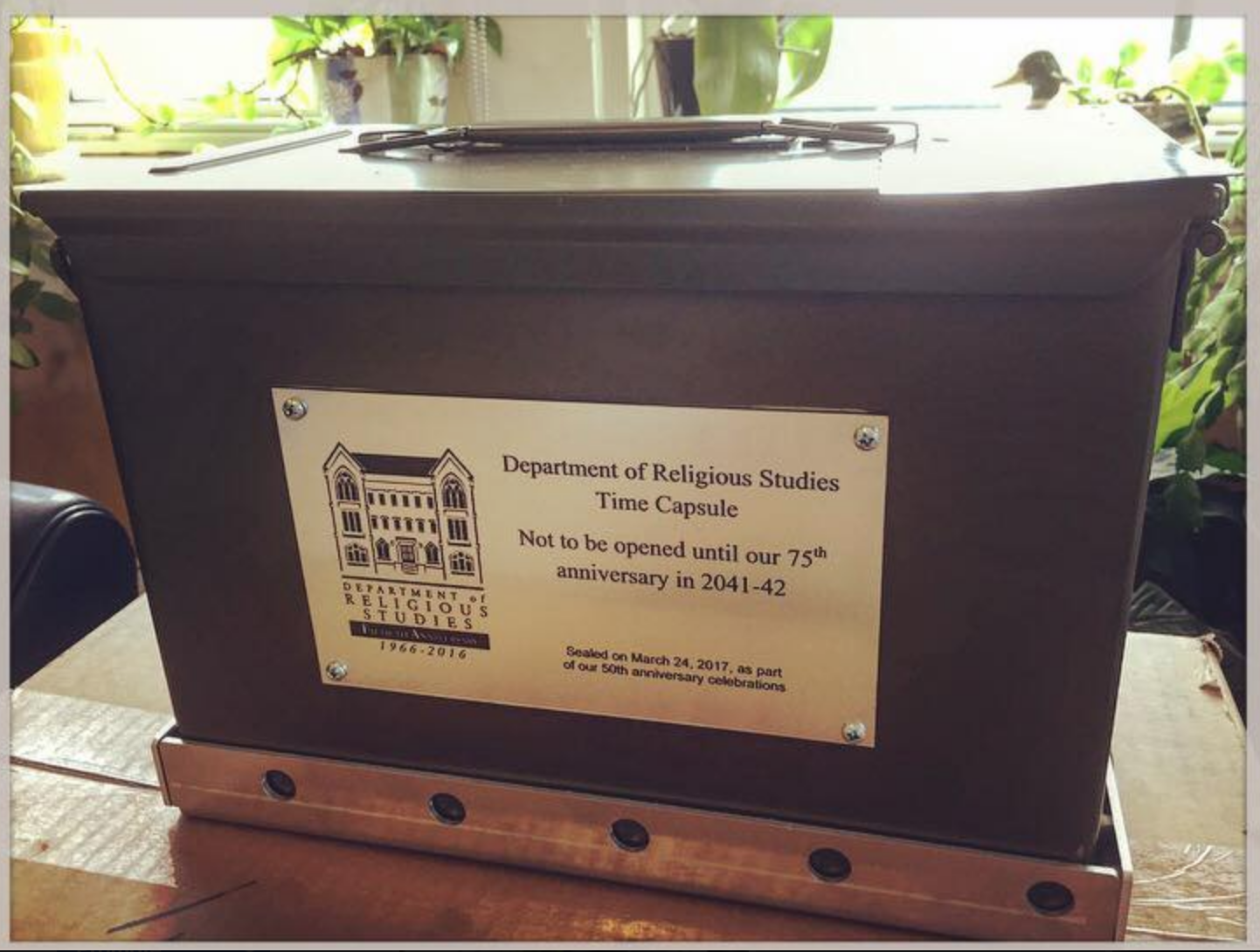