Professors around the department often talk about their “research.” But what exactly is that? It’s something to do with books and articles, right? In hopes of showing how some of us work–or at least how I work–below is a day by day running journal of a five day research trip I took to the Bancroft Library at the University of California, Berkeley.

I took a long flight this morning from Atlanta, where I left my wife and children behind with my in-laws, to San Francisco. I then caught an Uber over the bay to Berkeley. I’m staying in a room at Gibbs Hall, a guest house at the Church Divinity School of the Pacific. It works well because it’s only a ten minute walk from the guest house down to the library at the university. Plus it’s cheap and kind of quaint. 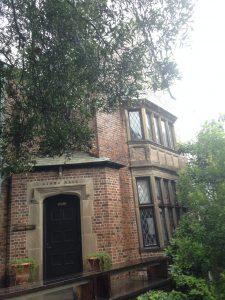 But why am I in Berkely at all? Why did I fly all the way to California to come to the Bancroft library? Good questions.

I came to the Bancroft to look at the materials in their South Asians in North America collection (SANA). This collection has a lot of things in it having to do with South Asian immigrants to the West Coast of North America, but it mostly focuses on a group called the Gadar Hindustan Party. This was a political party organized by South Asian immigrants to the West Coast that worked to end British control of India during the first half of the twentieth century. I’m interested in Gadar as part of my next book project. I’m writing about the history of Mohandas Gandhi in America, especially on the various ways he was represented by different American groups. So, I have come to the Bancroft to find out what Gadar said about Gandhi. Gadar was much more militant than Gandhi and encouraged the use of violence against the British to drive them out of India. Were they critical of Gandhi’s non-violent resistance? What did they make of him?

But it’s always good to have more than one plan when you come to an archive. Because what if I can’t find anything about Gandhi in the Gadar collection? So, I’m also curious about Gadar itself and the ways it described its mission to free India. I don’t know what I’m looking for but I’m going to keep my eyes open for anything that might lead to an interesting article or that might be helpful for another project later on.

By the time I got settled in at the guest house it was dinner time. So I grabbed a slice of pizza at a nearby pizza joint and watched the NBA games. Tomorrow the research begins!

Today was the first day of research “in the archives.” But what does that look like? Well, first of all here’s what it looks like inside the Bancroft library in the reading room where I worked. 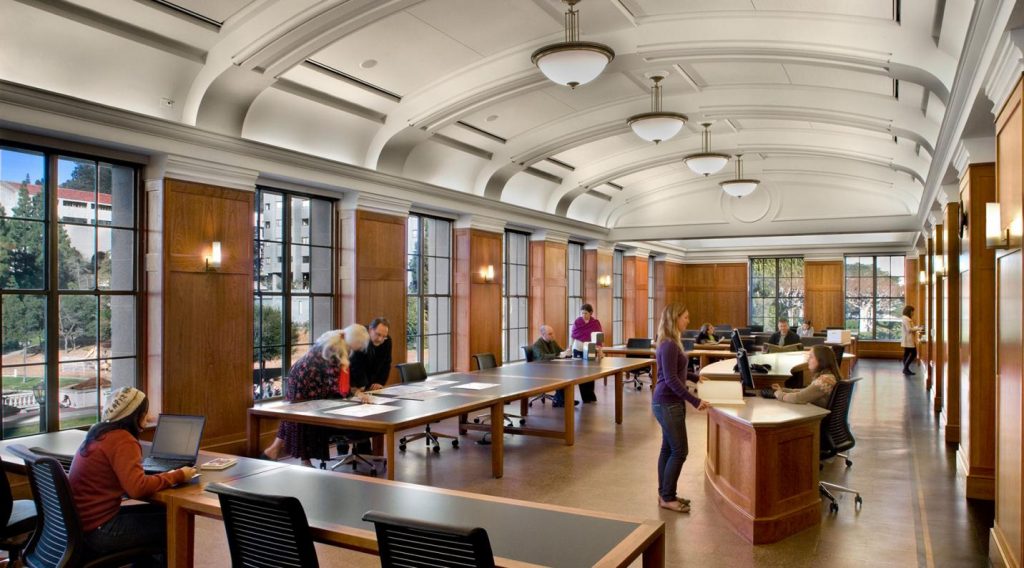 The SANA collection consists mostly of boxes with folders containing various documents. I had requested the boxes that had material I wanted to look at ahead of time so when I got to the reading room today I was all ready to go. You can only look at one box at a time so they brought the first box to my seat and I started going through it.

And now we get to the actual work of “doing research.” All day I went through the box, pulling out one folder at a time to see if it was something of interest or use to me. If it was, then I wrote a note about it in my notes on my laptop and took pictures of it with the camera–always making sure to write down the filename of the images in my notes so I know what is what.

Here’s the bad news: I didn’t find much of anything about Gandhi today. Most of what was in the two boxes I went through today was material about the Indian-American and especially Sikh communities in California during the first half of the 20th century. There was some really interesting stuff about so called “anti-Hindu” discrimination and even violence. For example, I found a newspaper report of two houses of South Asian immigrants that was attacked by a mob in Marysville, California and driven out of the city limits.

Even though none of this stuff helps me answer my research questions, it might be useful for other work I’d like to do on race, violence, and anti-Hindu discrimination. So I took pictures of it just in case. Hopefully better luck tomorrow.

My walk from the guest house to the library has me pass the clock and bell tower on campus, Sather Tower, every morning. It’s no Denny Chimes. 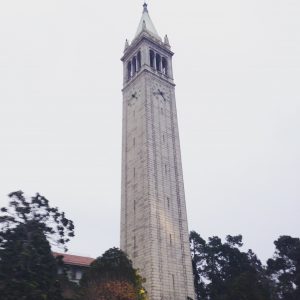 Today I found some more relevant material on the Gadar movement. There was a good bit of material written by Gadar members when they were older, giving first person accounts of the founding and history of the party. I also found a couple things related to Gandhi that weren’t published by the Gadar Party but that will still help me in the larger Gandhi project.

The most interesting thing i found was a 1928 San Francisco Examiner article. Here’s the lede:

SAN JOSE MARCH 16 — There died her today Vaishno Das Bagai, a Hindu art dealer of San Francisco, who committed suicide by gas as a protest against refusal of the United States government to recognize the American citizenship which he claimed. In a letter he left to the world at large through the San Francisco “Examiner” he voiced his protest in an arraignment of the American naturalization laws.

The article then goes on to quote the letter in full.

I came across a lot more Gadar publications today and I keep coming across places where they describe the men who have been killed by the British for their resistance and activism as martyrs and their deaths as sacrifices. I’m very intrigued by this language.

The library closed early today for a staff function so I only had until 1pm. But I still got a lot done because the box I looked at today was chock full of Gadar publications. Most of them were from a man named Har Dyal who was one of the early leaders of the movement. These were great sources for thinking about what Gadar’s message was and the themes of sacrifice and martyrs continued to come up again and again. I took a lot of pictures and I can’t wait to go back and read everything more closely.

One problem I’ve run into is that much of what Gadar published was written in Urdu or Hindi and I don’t read either of those languages. I’ve just skipped the materials in those languages but it makes me think that whatever I do with this stuff, my argument will be limited to what Gadar was trying to say to an English audience–i.e. white Americans and the British–and not their message to fellow South Asians.

I have two boxes left to go through in the collection and tomorrow is my last day of research before I take a red-eye flight back to Atlanta for Christmas. 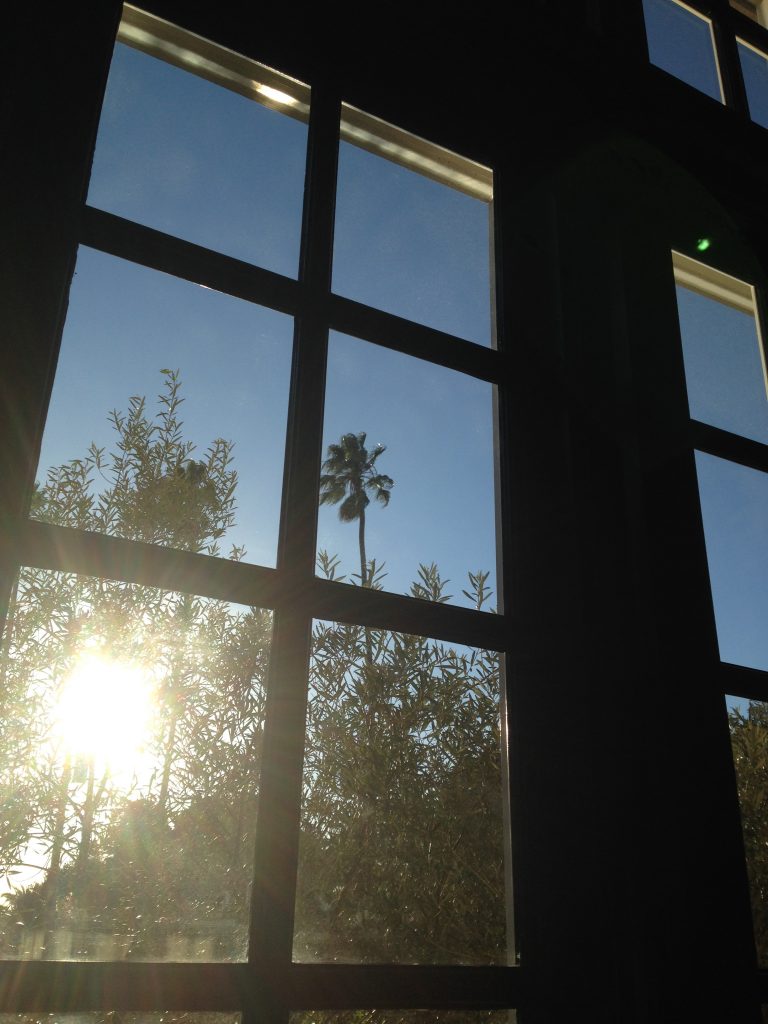 Today is the first day it hasn’t been rainy and gray outside. Today is also the last day I’ll be in California. I finished up my research in the archive. I went in when the library opened at 10am and I was done by 2pm. I found more Gandhi stuff today. A whole series of pamphlets published by the Gadar Party around 1920 that said Gandhi’s passive resistance wasn’t enough and that a real revolution, as in a violent revolution, was necessary to free India. I also looked through a volume of letters from 1919-1921 that was part of the collection. The letters were from an organization in New York called the Friends of Freedom for India, run by a woman named Agnes Smedley, I didn’t know anything about this group but they wrote to the Gadar Party and played an important role in funding the party and spreading their publications around the country. One letter even included an address where the Gadar Party was supposed to send pamphlets to a woman in Birmingham, Alabama. Roll Tide!

But the researching is over for now. I’m sitting by a window in the common room of the guest house finishing this post and then I’m taking a redeye back East for the holidays with family.