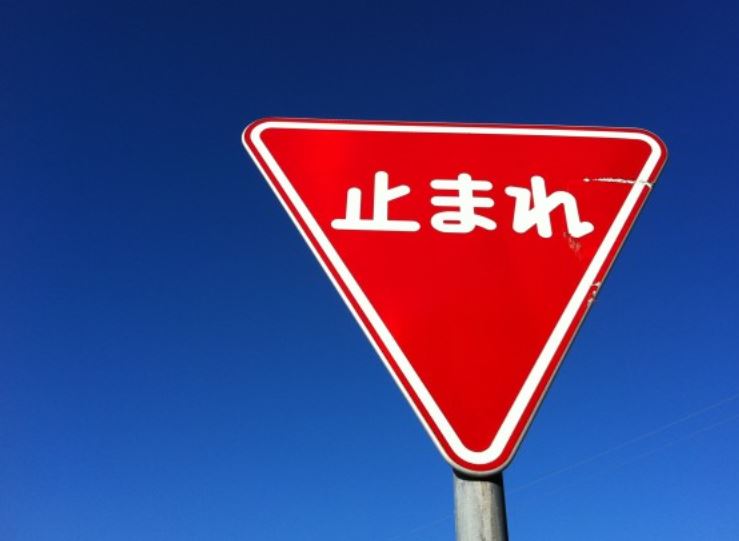 Well…, do you read Japanese?

But at least it’s the right color.

Who knew that yellow stop signs were prominent in the US during the first half of the 20th century.

It gets rather tiresome for those who entertain the social construction of reality to have claims about cold hard facts thrown at us, in order to refute how we approach our studies — such cold hard facts as the terribly real implications of running through a stop sign.

Such responses remind me of that classic episode Boswell narrated in his Life of Samuel Johnson (published in 1791):

Citing the hard facts, as Johnson is reported to have done so convincingly, seems to me a rebuff designed to answer Bishop Berkeley’s famed idealism, but not one well suited for today’s social construction.

So I propose considering stop signs as a crash course on social constructionism: for it doesn’t take a lot of thought to realize that stopping at an intersection is not a natural or inevitable act but is, instead, the result of a coordination among participating social actors. If done in concert and in the prescribed order, it allows them to take turns moving in physical space — it might hinder one actor for a time, sure, but, collectively, it ensures more efficient movement of the group. 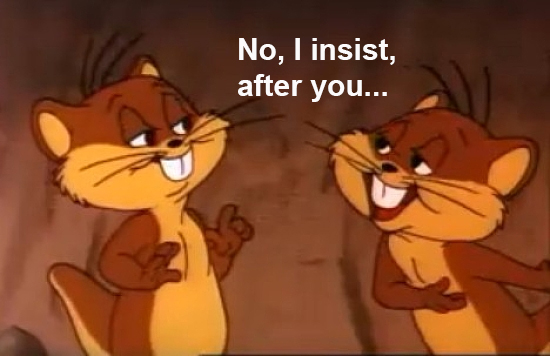 But you can run a stop sign if you want. And you don’t have to wait for your turn at a four way stop.

There’s consequences, though — from possibly getting a ticket (groups police — sometimes literally — their conventions, after all) to being involved in a crash. Maybe even killing someone (including yourself).

So here we have a useful example to consider when we discuss the social construction of reality — at least as I use the term. For unlike Berkeley, I’m enough of a realist to think that there are things in the world that I bump into, but on my own I don’t really know whether it’s a good idea to bump into them or not. For while I might avoid some things I might aim for others.

Anyone old enough to remember doing “the bump”?

So inasmuch as I’m well schooled in my group’s expectations for, say, what counts as a worthwhile lifespan, or maybe its thoughts on deference to authority or the value of efficiency and the importance of taking one for the team, then I can probably figure out that the risk of running the stop sign outweighs getting to work a few minutes quicker.

And, voila, inasmuch as we all tacitly participate in such conventions (or, better put, are sometimes forced to), well, we all just automatically stop at stop signs.

But sometimes the group’s messages are tough to read; for example, stopping at the red triangle likely isn’t natural to those who drive where I’m from, and who only read the language I’ve been taught to read. But equally so, spying a yellow octagon out of the corner of your eye, no matter what it says on it, likely won’t inspire you to hit the breaks either — that is, neither of these inherently mean stop. The so-called fact of stopping, and the fact of the sign telling you to stop, therefore aren’t really facts after all — if by facts we mean things that signify independently of a social group’s (contingent, thus historical and changeable) conventions. But what about the cold hard fact of the accident that might result when you blow through an intersection? Well, getting your car smashed when someone runs the light might seem to be an undeniable occurrence, but it doesn’t necessarily signify anything — i.e., were you the victim or the perpetrator, will it be lamented, insured, or might you just walk away from the wreck and write off the car? A specific sort of narrative therefore needs to be placed on the so-called raw occurrence in order for it to spin one way or another, to mean one thing or another or possibly to even be memorable and noteworthy as opposed to unnoticed and thus utterly insignificant.

The point is that events don’t proclaim their own significance.

For instance, do you know the example of the wink, that Gilbert Ryle used and then that Clifford Geertz re-used (see p. 6 forward).

Apart from illustrating Geertz’s point concerning the need for outsider’s to entertain a so-called thick description of an insider’s worldview (in order to sort out all the possible things that the rapid twitch of one set of eyelids might be signifying), the example of the wink also nicely illustrates that, without a group signifying the action (a come-on? a sign of a conspiracy?), it is but a twitch that likely has so little consequence as to go unrecognized. After all, bodies do all sorts of things, even when standing still, and so which of those things ought to attract our attention as carrying socially significant information?

The world’s a busy place, after all — so to what do we pay attention?

The error we often make — or so the social constructionist would argue — is in failing to see our groups as the originators of our focus; instead, we often segment the sign from those doing the signifying, as if it embodied some value in and of itself.

As if a red octagon just means stop.

As if everyone knows what a wink means.

But it doesn’t seem to work this way, for apparently yellow can mean stop too. And who knows what all that eye twitch might be communicating (if anything).

So sure, there are practical implications — sometimes what you’d judge as minor and sometimes what you’d judge as extremely serious — to following or not following the conventions that we use to navigate our lives. But it’s what you and yours judge, no? And judgments differ all the time. Heck, here in Alabama running through intersections is such a frequent occurrence that cautiously stopping on the yellow can cause the person behind you to crash into you — i.e., the warning of the yellow light doesn’t mean “watch out, coz it’s gonna turn red any second” but, instead, “watch out because the person behind you might be stepping on it.”

So, like I said, I’m enough of a realist to assume that something is happening; but, to my way of thinking, there’s way too much happening to just know which of it I ought to be watching, marking, decoding, signifying, and which I can afford just to ignore. And that’s where social constructionists argue that groups come in — and it often works so well that we start thinking that a red octagon just means stop — until, that is, we venture beyond the borders of our group.

So you can see why I don’t feel all warm and cozy when I hear talk about the cold hard facts.