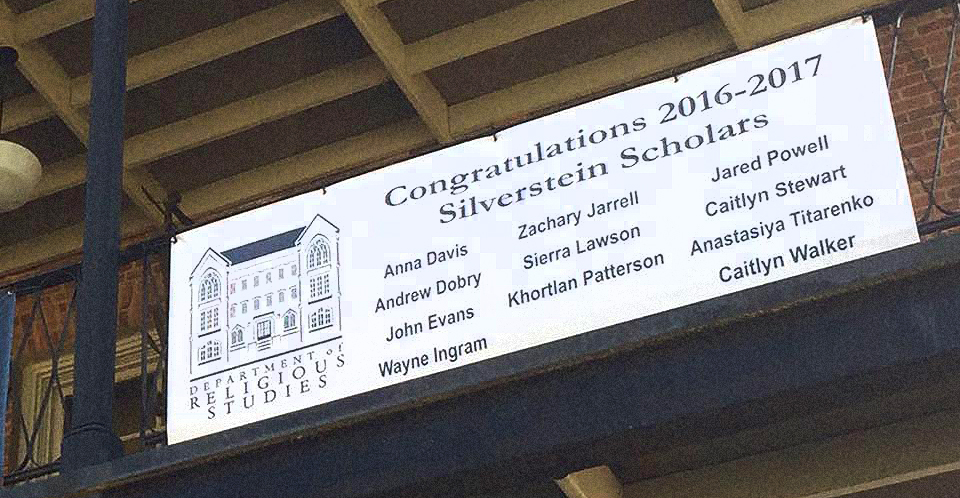 We have great students here in REL. When they graduate they go off to do great things. (You can hear about some of the things our graduates do at our Grad Tales events.) We are proud of all of the REL majors that are graduating. Four of this year’s REL graduates are going off to pursue further academic work in graduate school:

Jared Powell and his perfectly pressed pants will be working towards his M.A. in English here at the University of Alabama. Jared was the Outstanding Student in the Academic Study of Religion in 2014 and a Silverstein Scholar in 2015-2016 and 2016-2017. He also made some pretty good movies and photoshop images while working in the REL office.

Khortlan Patterson will be heading off to Princeton Theological Seminary. Along with her active work within the UA campus community, Khortlan was a Silverstein Scholar four years in a row from 2013-2014 through 2016-2017 and was an Outstanding Student in the Academic Study of Religion in 2015.

Sarah Griswold will be heading south. She’ll be attending Florida State University where she’ll work toward her M.A. in the Religious Studies Department. Sarah was the 2016 Outstanding Student in the Academic Study of Religion and her essay “There is a Well at Cawnpore” won multiple awards for undergraduate research.

Congratulations! We’re all very proud of you!