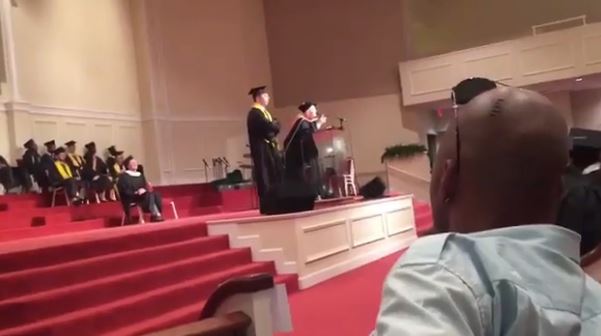 As cited in the above-linked article, her later apology read as follows: 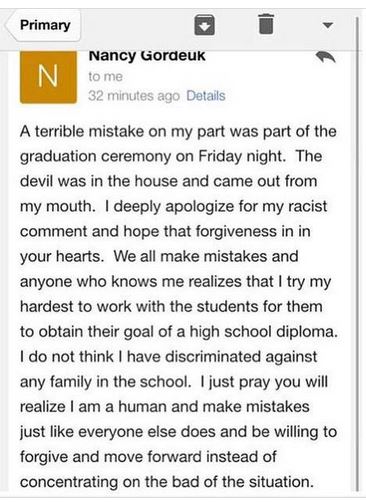 Of course there’s plenty to find interesting in this episode, not least of which is the ease with which race was invoked by the speaker (yes, a white person in a position of authority), such as in a subsequent interview that doesn’t much help her case:

But, thinking of the study of religion as the theme of this blog made me wonder about something else as well: the limits of theological discourse. For while I can imagine plenty of people putting little stock in her Flip Wilson-like explanation — “The devil was in the house and came out from my mouth…” — many of those same people likely invoke theological discourses all the time themselves and value when others do it too. They pray for people, ask others to pray for them, and talk about God and God’s will; in fact, not a few have speculated that an outright atheist would never be elected President in the US — invoking religious discourses, at key moments, is just that important.

But here we seem to see the limits of theological discourse.

Is it so simple as to say that this discourse merely legitimizes that with which a group of people already agrees, suggesting that adding it to controversial statements will simply be seen as insincere or an abuse of religion? (To rephrase, religious talk can only be credibly added to statements we already agree with.) For if this is the case, then religious talk is a form of rhetoric that lacks a substance or a content of its own; and so, in certain situations it can authorize but, in others, it falls flat.

For many, I assume her apology counts as an example of the latter and thus won’t be accepted.

All of which suggests that we’d be mistaken to think that religious talk is the public expression of those interior states many of us call religious beliefs; instead, as made evident in cases where it fails, its the wrapping paper that we try to add to statements that are motivated by a host of other mundane dispositions and social interests.

3 thoughts on “The Devil Made Me Do It”