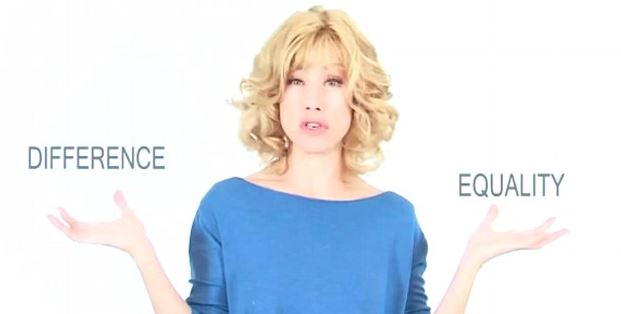 Have you heard? There’s a conference taking place at the Vatican, on women. You can learn more here if the media player doesn’t load, or just listen to the story below.

Sure, there are female presenters at the event, but they won’t have any decision making power, as described in the radio story. So that’s curious, of course. It also references what turned out to be a controversial promotional video (at least in some parts of the world), soliciting women to upload videos in which they talk about their lives, that came out well ahead of the conference. (Controversial since it was seen by some to promote too sexy an image of women.) If you’ve not seen it, take a look.

There’s lots to talk about here too, but what caught my ear in the radio story on the conference were the closing lines, quoting a draft document produced for the conference, in which the topic of plastic surgery is raised. The trouble with it, it seems, is that it

can amputate the expressive possibilities of the human face and can be aggressive toward the feminine identity.

While there’s certainly a curious presumption about authenticity lurking here, let alone assumptions about essential gender differences (topics that have preoccupied most commentators who have got hold of this quote), what’s even more interesting, I think, is that a women is then quoted in the report as saying (as per the title of this post):

Plastic surgery is like a burqa made of flesh.

Surgical alteration to a woman’s appearance is thus critiqued by likening it to a Muslim women shrouding herself; this is a fascinating rhetorical move, for it relies on a comparison whereby the person speaking makes something seemingly familiar (i.e., a tummy tuck, perhaps? Lip injections maybe?) seem strange by finding it to be similar to something already taken to be alien. And so what happens in this little comparison is not just that plastic surgery is delegitimized but that the supposedly alien nature of some forms of Islam is naturalized, reinforced, inasmuch as it is the asserted and thus unquestioned standard against which this speaker determines what else counts as illicit.

And so, as per the critique of Orientalism that some now know so well, a short quote about us and what we do quickly reveals that we might have been talking about them and what they do all along.

One final thing: that a woman is credited with this statement is no less fascinating; it causes me to wonder if she wears make-up, combs her hair, or has any sense of style or occasion when she dresses (“Oh, we’re going out? Let me change…”). Come to think of it, the sort of authenticity her argument presupposes might require her not to dress at all (“You’re a naturalist, I see…”), since clothing is but one more layer of social artifice that amputates the expressive possibilities of the human body, no?

One thought on ““Like a Burqa Made of Flesh””