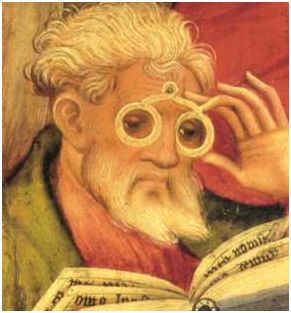 On the flight home from a visit to Lehigh University this past week I started reading Steven Johnson’s engaging How We Got to Now (2014) — a popularly-written book on the conditions and unanticipated connections that helped to make possible the innovations that many of us now take for granted (e.g., public sanitation or refrigeration).Early on (p. 4, to be precise), he sums up the general theme of the book as follows:

Johannes Gutenberg’s printing press created a surge in demand for spectacles, as the new practice of reading made Europeans across the continent suddenly realize that they were farsighted; the market demand for spectacles encouraged a growing number of people to produce and experiment with lenses, which led to the invention of the microscope, which shortly thereafter enabled us to perceive that our bodies were made up of microscopic cells. You wouldn’t think that printing technology would have anything to do with the expansion of our vision down to the cellular scale…. But that is the way change happens.

I think there’s a lesson here for the modern university and the rush for students to specialize; for while specialization is a crucial element of innovation, of course, there’s also the need to understand the inevitable role of unanticipated connections (so nicely identified by Johnson in his book) — to understand, for example, that late-13th century glassmakers in Venice could never have anticipated the role their expertise would one day play in creating the transatlantic fiber optic cables sending this blog post from Alabama to Europe.

Innovation requires specialization and an ability to grapple with sheer happenstance.

And I tend to think that this is one of the contributions of students who specialize in the Humanities; while some may criticize them for training outside the professional specializations that are now said (by some) to lead to stable careers, I’d instead praise them for being bold enough to work outside these boundaries. For, because of this, they might be the ones especially well positioned to make the unscripted links that are likely possible only when you’re — as the old saying goes — able to think outside the box.

Check out the PBS series that goes along with the book.