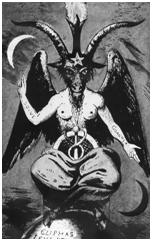 By Cynteria Jones
Cynteria Jones is a senior majoring in English with a minor in Religious Studies. She is from Dadeville, Alabama. Though she has not selected a school thus far, she plans on attending law school in the Spring of 2015.

Do you ever find yourself questioning religious beliefs that differ from your own, or simply feel as if yours is, somewhat, better? This is definitely the case concerning Satanism and other non-mainstream religions that exercise beliefs opposite of what the majority identifies with.

Early January, one of the biggest controversies dealing with the freedom of worship surfaced. A group of Satanists presented a sketch to the Oklahoma state legislature of a 7 foot monument intending to be placed beside an erection of the Ten Commandments. Since the state legislature saw fit for the privately funded monument of the Ten Commandments to stand proudly before the Oklahoma state capitol, Satanists felt that it was their inalienable right to pay homage to the god they worshiped, Satan. After all, worshiping a deity is a prerequisite for a “real” religion, right?

According to the online article, Application for Satanic Statue, Oklahoma state legislator Earl Sears denied the Satanists’ design that portrays Satan as Baphomet, a goat-headed figure with horns, wings, and a beard. Sears reports, “I do not see Satanism as a religion….the groups effort is an insult to the good people of the state.” Now questions start to arise. What is religion? Who decides what is worthy of being named a “real” religion? Does this violate certain constitutional rights?

Lucien Greaves, with the Satanic Temple, adds that their 7 foot monument carries the same weight as that of the Ten Commandments (both literally and figuratively speaking). In addition, Greaves states:

…not only would a satanic monument send a clear and distinct message that America respects plurality, freedom of religion, and freedom of speech, but it would also stand as a historical marker, commemorating scapegoats, the marginalized, and the demonized minority, the unjustly outcast.

Though individuals have a natural tendency to compare/contrast their beliefs with those of other religious groups, this article emphasizes how groups use religion as a means to mark their place in society and exclude others as if religion has one secure definition.

Image of Baphomet by Baphome1 [Attribution], via Wikimedia Commons