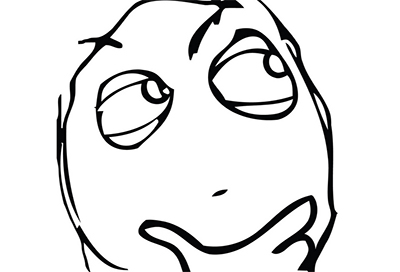 We received an interesting commentary the other day, from a Distance Learning student, concerning one of our courses, REL 100 Introduction to the Study of Religion, which is also offered as an online course (developed by our own Prof. Merinda Simmons and taught, this past semester, by Mary Rebecca Read-Wahidi).

As noted previously, when I first enrolled in this course, I expected and looked forward to a survey of world religions. I find the religious practices of other cultures to be fascinating and believe that it is essential for us to understand world religions in order for us as a culture to understand the motivations and actions of other cultures. The material presented in this course came as a bit of a surprise to me. I have found, however, that the approach of this course to actually be a better one when considering the role of higher education as a whole.

Sure, we could have merely studied the highlights of a few major world religions and, by rote memorization, prepared for exams. That approach often only leads to a surface knowledge, a knowledge useful and retained only just long enough to pass. The approach of this course grants a better gift to the student. By challenging us on our assumptions and teaching us terminologies and avenues to approach religion, this course is not only beneficial for the study of religion. By emphasizing critical thinking and questioning motivations and premises, this course helps to equip students for other areas of academic study outside of religion, a benefit that is not realized in a survey type study.

From this course, I take away a greater understanding of how cultural influences affect how we view other cultures. I have come to realize more fully my own cultural biases concerning world religions, particularly those outside of the Abrahamic tradition. Something I lost from this course is a sense of certainty. By that, I mean that I realize that the more I learn, especially to look critically at my own assumptions and cultural influences, the more doubt I have about how the world works. I look at world events in a different light. It’s easy to look at things from your own best interests and quite another to look at them from another’s best interests.

I’m doing a poor job of explaining, so I will offer an example. For years, the U.S.A. supported a regime in South Africa that promoted apartheid. This was done strictly from a cold war perspective – while we recognized in our own country that such actions were wrong, we disagreed with the political ideology of the opposition, leading us, as a nation, to ally ourselves with the wrong side. So from a national self-interest, our country supported the wrong position. From the perspective of human rights and the best interests of the South African people, our position was untenable. Patriotism says we were right; humanity judges us as wrong.

I find, confirmed by this course, greater knowledge often leads to more questions and less certainty.

Wisdom and humility are thus nicely tied together — after all, don’t we often hold up Socrates as a model of the rigorous inquirer? His wisdom, tradition says, was to be found in his acknowledgement of his ignorance, no?

The College of Arts & Sciences, in which REL makes its home, has a motto that we’d like to think aptly sums up what this student told us…

If some now think that university courses need to start coming with a “trigger warning,” so that students get advance notice about possibly controversial content in their classes, then let this be ours:

WARNING
The World is Bigger Than it Appears
and Not Everyone Agrees With You.
Proceed with Caution…,
but also Curiosity and Critical Thinking.