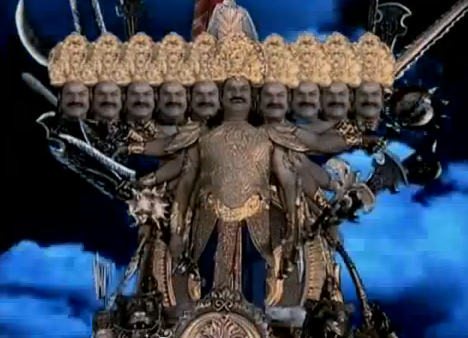 With the release of “Noah” in theaters across the U.S. on the day that I’m writing this, an old thought occurred to me: wouldn’t it be interesting to use popular movies as a way to entertain how to see “their” local as “they” might see it? For the familiarity that we attribute to stories about, say, talking to burning bushes or feeding throngs with a few fishes and loaves is surely comparable to how familiar other people surely consider the miraculous tales that they grew up hearing, that they read and study, or that they hear recited regularly in ritual settings.

You know, those tales that likely strike anyone not weaned on them as being, well…, admit it: kind’a silly.

For example, consider the multiple heads and flaming arrows flying in the serialized version of the Sanskrit epic Ramayana that aired on TV in India in 2008 — perhaps this scene of Rama (an avatara of the great god Vishnu himself) finally defeating the evil King Ravana.

The question is how to invite students unfamiliar with “things Hindu” to begin to “see” this movie, to “feel” this narrative — multiple heads and all — as being no more or less exotic than…

After all, ancient Hebrew society, whether represented as it may have actually been or even portrayed with the 1950s sensibilities of the film, is surely just as foreign a land as anything coming to us from the subcontinent of India, no?

Cracking this nut would be a great lesson in making the familiar strange and the strange familiar — that old chestnut that’s usually hauled out as the raison d’être of comparative religion. While I’ve got a few ideas on how to do it (e.g., if you’re familiar with the story of Jesus, as one or two of our students are, then the notion of a great god taking on human form to accomplish something, isn’t all the strange, right?), I think it best to just throw this query out there, into the big internet beyond, and see what comes back.