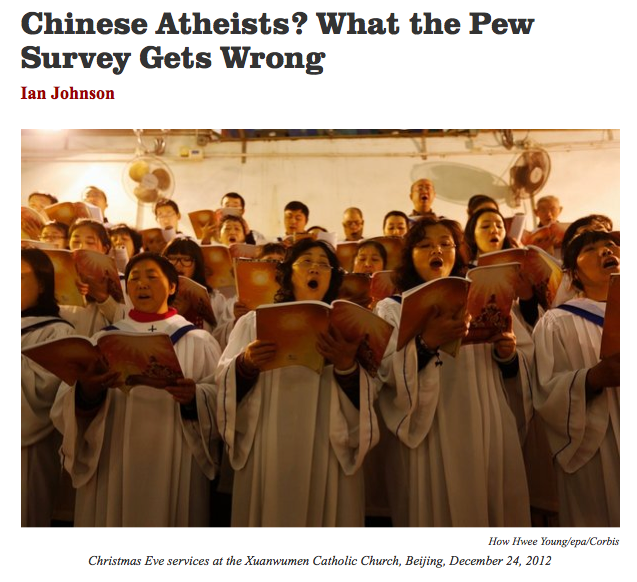 A few days ago I posted on Facebook and asked when someone was going to tackle a dissertation on the Pew Charitable Trust or its research wing, and the way in which their seemingly objective polling is actually constituting a very particular sort of social world into which it is trying to fit the entire population of the globe.

And voila, here’s a piece of data for that hypothetical dissertation: an article from the New York Review of Books on how the survey gets it wrong when it comes to the role of religion in China.

But a word of caution: I don’t think the survey gets it wrong, and making that assumption — that there is a right and a wrong way to understand a group — is the pitfall that such a dissertation would have to avoid. It’s a problem evident in recent work on those who report to pollsters that they have no religious affiliation, the so-called “the Nones” (a problem nicely avoided by a variety of studies of research on the Nones that are posted here).

Instead, it would have to examine competing representations of, say, how social life in China can be organized and thereby understood, using such things as this article, on the one hand, and the Pew survey (which they just purchased from a third party and then administered), on the other, and then look for the gaps between the two, the agreements and the contradictions, in order to conclude something about the two very different worlds that are constituted by both. What’s more, such a dissertation would have to avoid the assumption that there is an obvious thing out there called “religious life” and that the trick is just to describe it the correct way; instead, such research would have to take seriously that trying to describe or assess or see trends in “religious attitudes” is already deeply embedded in constituting the world in a particular way.

Now that would be a dissertation worth writing.

3 thoughts on “Probing the Problematic Polls”