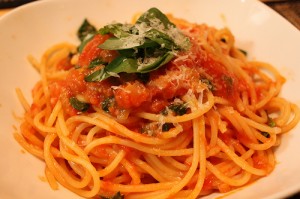 Recently while perusing The Huffington Post I came across an interesting article titled, “10 Common Food Terms That Have Lost All Meaning.” The article’s main concern is how certain food classifiers such as authentic and natural have been overused and in the author’s opinion have “lost all meaning” as a result. The problem seems to be that we can no longer trust a company when they advertise their product as such because they have used descriptive terms that some deem to be inappropriate or misleading. We encounter this all the time when choosing which restaurant to go to or what item on the menu best suits our current tastes.

What particularly struck me were the similarities between the article’s discourse and the ways in which many terms found in discussions of religion have been contested over time, including debate over the term religion itself. The assumption that a word or phrase carries inherent meaning can certainly be problematic, as language is a system of signifiers that constantly evolves. Just as religion has been understood and employed in a variety of ways, the source and nature of the food we eat on a daily basis is open for dispute due to the labels placed on it. Neither category carries a definition that exists outside of human influence and interpretation.

Sure, some might perceive that there is something to be gained from attempting to devise the best definition for an expression or concept. There are countless scholars invested in determining the “real” meanings of religion, myth, and many other topics in the field. What I think is perhaps more deserving of attention is the ways in which different groups of people use these terms for a wide array of purposes and what it says about those groups. Does the use of a label in an unconventional arena mean that the meaning has been entirely lost? The ever-changing strategies of advertising are evidence of the nature of identifiers and display the ability to appropriate them to suit our own needs and interests. How would the local Italian restaurant respond if I used this type of ambiguous language, requesting their most authentic dish in place of my normal order? Then again, what is normal?