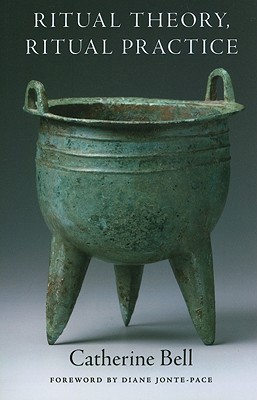 Several Facebook friends have recently re-posted this Guardian article, “Why Non-Believers Need Rituals Too.” Its argument is that humanists or atheists or agnostics — or whatever else we name this loosely (if at all) identified group, a group likely comprised by our very talking about it — need to give more attention to the aesthetics of their collective practices. Why?

… because it is through ritual that we remake and strengthen our social bonds.

What’s curious about this journalist’s argument, at least to scholars, is that we all know that this constitutes but one among many different theories of ritual. Crack a book, like that of the late Catherine Bell (pictured above), and you’ll find any number of other definitions, and thus theories, of rule-governed, collective practices, making this Guardian article a good example of what scholarship ought not to be doing: failing to recognize that our starting points are not empirical facts but, instead, hypotheses driven by our own interests.

To rephrase: if you grant me that rituals comprise the social glue of collective life, then I can say this or that about how groups work. But if you won’t, if you instead understand ritual as, say, repetitive behavior that allows people to simultaneously express and repress the inevitable anxieties of daily life (calling Dr. Freud…), then you’ll proceed rather differently concerning why you think people need rituals. Or maybe you’ll go so far as to question the rationale for my very distinction between habits and rituals and thus my focus on the later as being not only so real but also so much more interesting than the former.

But if you too find the social glue approach interesting, then do yourself a favor and check out this interview with Harvey Whitehouse, now one of the foremost scholars of ritual studies (who draws on anthropology, history, and cognitive science). If you do then you’ll be far better prepared to use this approach that the Guardian‘s writer.