Last Spring, the following ad swept through the internet, much to the satisfaction–I would imagine–of a few professors and students in the Humanities. 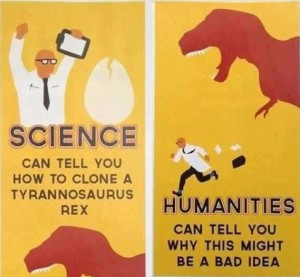 It strikes me as rather unproductive, however, inasmuch as it stereotypes the Natural Sciences as amoral, disinterested pursuits (i.e., pure science in a lab coat) and equally stereotypes the Humanities as pseudo-theology, as being preoccupied with questions of morality and deep meaning. Scientists therefore need poetry and theater and philosophy to keep them centered and grounded–the plot of not a few sci-fi movies is premised on the dangers of science run amuck.

Neither portrait, however, is accurate; legitimizing ourselves by appealing to our supposedly privileged position as the arbiters of worthwhile knowledge won’t serve us very well in persuading our academic peers that our contributions are relevant; for we’ll just come off sounding like annoying know-it-alls. But if alienating them and making Humanists feel good in what they see as their ostracized, victimized position is the goal, then this sort of nostalgia for a long lost time when we alone knew what was moral, and scientists dressed like guys working at NASA in the 1960s–skinny black ties and white shirts–might be a really good idea.

2 thoughts on “Land of the Lost”