I remember a speaker who would hold the vowels in the first syllable of the word “meaning”–saying “meeee-ning”–signalling to the audience, I guess, that he really, really meant it, much like those who don’t just mean something, like when they extend either their good wishes or deep sympathies, but, instead add that they “sincerely mean” this or that. When it comes to the word “meaning,” I’ve noticed that lots of people do this in my academic field (the study of religion); often associating a hand gesture with this linguistic affectation: some sort of reaching out, maybe the hand slightly opened upward, as if loosely cupping and then displaying a precious object–somehow trying to signal, I gather, the extra mile that they are going to convey the significance of their words. But, despite the highlighting that they behaviorally give to their words, they are, after all, just words–sounds produced by the body and decoded (or encoded?) by ears and brains. Yet somehow, as listeners, we tend to think that they are actually meaningful, sounds and characters on a page or a computer screen that somehow carry this thing we call meaning (for example, did you notice my choice of “convey” two sentences ago? Much as when we “speak from the heart”…). As I’ve often told my students, you can’t hear or read your own language and not “hear” and “see” it as language, as having a meaning.

In the study of religion this approach is sometimes signaled by a speaker talking not just about meeee-ning but about “deeeep meeee-ning” (did you notice, above, that they were not just someone’s sympathies that I mentioned, but their deep sympathies?); the depth qualifier lets you know that there’s meaning and then there’s meaning, and that the latter, the one I mean now in this place, on this occasion, is hardly shallow or insincere, but comes, instead, from somewhere near my very core, in my deep place–not where my spleen or colin happen to be located, but somewhere near to where my soul is. Or, to secularize this obviously theological, and for some, rather dated, imagery, I could say the place where my own personal kernel of universal human nature apparently lurks. We moderns therefore express our meaning–squeeze it out, like toothpaste from a tube, from its supposedly private place somewhere deep on the inside, letting it loose in the world. “I mean this from the bottom of my heart…”

For those of us in the academic study of religion who argue that our scholarly field ought to be something different from simply reproducing elite forms of rational, participant discourse–in a word, what we call theology–the option to talk about the field in such a classically Humanistic way has been very useful and widely reproduced. This is evidenced in the following website, developed not so long ago by the American Academy of Religion–the field’s largest professional association. First off, in the following screen shot it is stated clearly that the the study of religion is not theological yet, curiously, theology is among the places where we get the tools for doing our work: 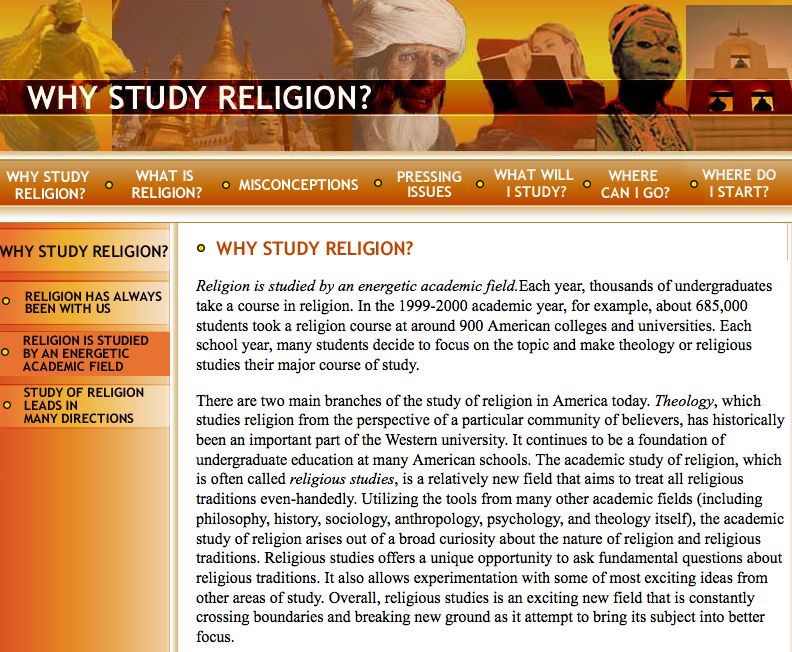 The ambiguous place of theology notwithstanding for the moment, the site then must sort out just what the study of religion is about, if not studying religion “from the perspective of a particular community of believers.” The answer? We instead study meaning! And, lucky for us, religion is the preeminent site where all this meaning is happening. For instance, under the main menu’s “Pressing Issues” tab, we read: 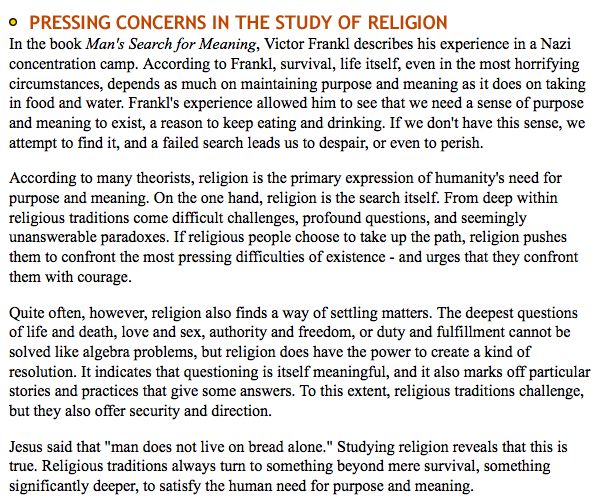 And here we have the reason for why the old distinction between theology and religious studies–once (and obviously still on this site) the commonsense way of talking about who we, as scholars of religion, were and who we were not–strikes me as deserving of retirement. For the old emphasis, at least in Christian circles–circles that still dominant the training of scholars of religion (the above reference to Jesus is not accidental, after all)–on the meaning inspired by the Holy Spirit has just been swapped for an equally transcendental, experiential referent, one that now goes by the name of the meaning expressed by the Human Spirit. Not much has changed–we don’t just study deep questions, but the deepest! Perhaps this is why the AAR‘s “Why Study Religion?” site sees no contradiction in stating that the field is different from theology but nonetheless uses theological tools. Same difference.

So I see little or no difference between theology and its lightly secularized cousin, the Humanities. (I’ve already elaborated on this site on how I wish the Humanities were understood instead, of course.) And this difference with no consequence led me long ago to prefer to talk about the Humanistic versus the Social Scientific approach to the study of religion (if I have to pick a team, I prefer the latter) or, better yet, simply to talk about being part of that loose collection of academic pursuits we call the Human Sciences–those that take seriously the historicity both of the object of study (i.e., human behaviors and what they left behind) and the tools used to study them (i.e., our methods and our theories–in two words, our curiosities and our categories). Dropping any pretension to studying things obviously important and really really meeee-ningfull, we instead own up to the fact that it is all mundane, all the way down–including us and our curiosities. The challenge, then, is to put our own interests on the table and argue persuasively–instead of just asserting–for why something ought instead to strike us as interesting, significant, worth paying attention to, if only for a while.

Which is why I continue to come back to a few lines by Pierre Bourdieu, the late French social theorist, in a little book of his entitled, On Television.

An exclamation mark and NB appear in the margins of my copy of the book. On page 21. Nota Bene: mark well. Pay attention. I, the reader, the one who has left my mark, find this here thing worth my while. Why? Let’s sit down and we’ll talk about it….

It is the mundane that is all around us and it is we who make choices and bring focus–the extraordinary is conjured into momentary existence by the underlining, in the case of my book, and the long vowels and gestures, in the case of that speaker whom I mentioned at the outset–to make just some of the generic things stand out, for either this or that reason, from the hectic background noise of day-to-day life. And that this extraordinization is happening all around us, in dizzying number of different ways and in the service of who knows how many interests, is what makes the study of ordinary culture so fascinating.

This is why I have never been comfortable with either the Humanistic or theological approach to the study of religion, simply because they both turn me into a couch potato–for, in both of these cases, things are always and already interesting well before I arrive on the scene and the scholar’s role is then simply to chronicle their continuing impact and carefully measure and then record their depth. This strikes me as the role of a journalist and journalism is not the profession I sought to enter.

It is the Social Scientific approach, better put, the theoretical disposition, the one that results from adopting the viewpoint of the person in the Human Sciences, that gets me off the couch and helps me to own that it was meeee who was making the meeee-ning all along.