It’s the day after our inaugural lecture in 2012-13’s series on the place of the Humanities and Social Sciences in the contemporary university and I’m troubled by the student feedback that I’ve heard so far. It’s come from some of our undergraduate majors, who attended, as well as from an assortment of students enrolled in my 100-level introductory course who also attended. (“Write me a one page description and you can earn some extra credit in the course”–the professor’s old trick to get students new to the university to think a few new thoughts, and, as we used to say, expand their horizons.) Whether or not it was the intended message of the speaker–Prof. Gregg Lambert from Syracuse University–the students seems to have heard a message of lamentation for the future of the Humanities–not a description of how we got here or a renewed defense of our relevance but, instead, a (to their ears at least) dire message from a senior professor concerning the fact that they may be deluded to think that grad school might be for them (since they’ll possibly be mired in student debt that will take them decades to repay–making grad school sound like a bit of a scam); because they’re all just human capital, spewed into the global market from a never-ending pipeline, why continue in their studies? As one first year student who attended the lecture said to me today, sounded both intimidated and incredulous: “Declaring a major may be the most important decision of my life?!”

Now, this is not necessarily the lecture that I heard (e.g., the pipeline imagery was directly contested by our speaker, but the image remained nonetheless), but I can understand why certain parts stood out for them–the shocking often proves the most memorable. And maybe that was our lecturer’s intention–a little cold water to wake us from our dogmatic slumbers. Perhaps these sobering words caught some of our students off-guard because we, as their professors, have not hammered home often and loudly enough that education is now (whether it always was, and we just had the luxury to pretend that it wasn’t, is a discussion that we ought to have) a part of the cost/benefit economic system as much as anything else. Given the uphill argument that we, in the academic study of religion, feel that we have in helping students (and, more importantly, perhaps, their families) understand that this undergraduate major is as relevant as any other (did you ever wonder why is “If you’re not going to become a History teacher, then why major in History” is not a question for people in that field?), you would think that our students, perhaps more than anyone else’s, had already done some of the hard-nosed decision-making long before declaring their REL major. And given the complex careers that some of us have had (yes, I know what it is like to be an Instructor and to consider the hard truth that, having earned a Ph.D., I had not also earned the right to feed and clothe myself by means of those skills), we are particularly cognizant of these issues and try to make sure students know too. But perhaps they need to be told again: structural factors well beyond your control kicked the sand out from under so much of the national and global economy in the late-2000s that it may take decades to recover (if recovery is even the right word).

But tied to that structural level analysis there needs also to be one that focuses attention on individual agency–and I wonder if this is what the student also needed to hear. Now, I’d likely never be accused of erring on the side of the rugged, can-do lone individual, boldly making meaning in the world–so fear not: I am not descending into some argument for the self-evident, intangible value of the Humanities for the noble self. No, not at all. Instead, I’m taking a basic insight from structuralism seriously and noting that, while we may emphasize one or the other for analytic purposes, no analysis of a binary pair is sufficient if is neglects the other side of the coin. After all, the way that the Other-in-our-midst is silenced or at least ignored (whether it’s worth recovering is, of course, another conversation) is a basic building block of the critical theories that have shaped so much of our work in the academy over the last generation or two–from the work of Social Historians to postcolonial theorists. So, taking a page from our own critical thinking playbook I think that, while focusing on structure, we also need also to draw attention to the agents within that structure; for the system did not invent itself (and it isn’t homogenous either) and neither did the agents invent themselves from whole cloth–none of us would be here without the mating rituals that were not of our parents’ own making, though they tweaked the rules and each other, to be sure…. And around and around it goes: structure made by agents made by structure made by… Turtles all the way down. That’s how the critical thinker in me sees it. 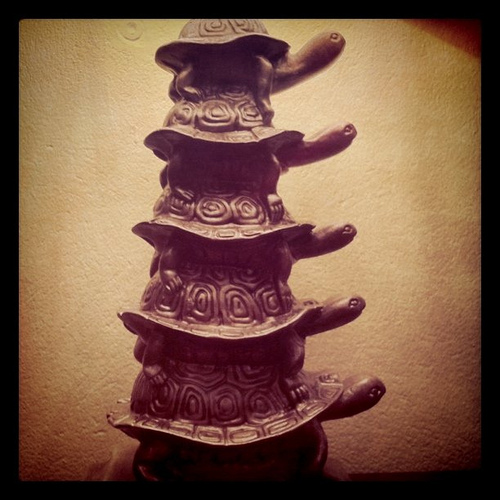 And this is the part of the message that our students didn’t hear–that they are agents within that structure, determined by many factors well beyond their influence, yes, but that they are nonetheless agents who, by their very activity, affect the structure (isn’t this the moral of the double slit experiment?); they collaborate and thereby continually re-make it.

I’m no Pollyanna, of course, and I’m certainly no Dr. Pangloss–no one is going to pull themselves up by their own bootstraps, despite how popular the “I made it myself” sentiment is right now in the current US Presidential election. But I would also not like to erase the presence of the actors in these structures, those who made the rules, benefit from them, labor under them, and who can and will change them–how, we have yet to see.

So this is not some dreamy-eyed message of hope–I’ll also leave spinning that tale to the political campaigns. But it is a message to our students to pay attention to the wider, structural circumstances in which you do your work–the structures that work on you: all those turtles above you and below–but also to know that those social worlds did not spring from the ground like a mushroom overnight; instead, people–huge numbers of people, people who didn’t know each other, people collaborating, competing, and contradicting each other–made them. Since you’re people–good people, salt of the earth people–maybe you can re-make it.

So be modest. Be strategic. Know that your good looks will only get you so far. Know that, at times, you’re an almost powerless item exchanged in a network of international capital–but, then again, you knew that as soon as you walked into The Gap, watched MTV, faced ever-rising tuition rates. or sat and respectfully listened to tenured professors lamenting over the job market. But also know that you have agency…–within structure within agency within structure, etc., etc., all the way down. And knowing your place within this never-ending system of reciprocal actors in situations-not-of-their-making means that you have what the ancient Greek called mêtis (μῆτις)–cunning intelligence.

3 thoughts on “Turtles All the Way Down”