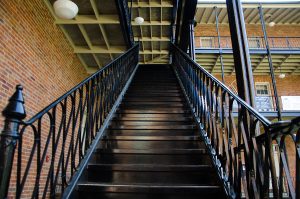 A Tale of Prepositions and Conjunctions

Although it may seem to some to be a rather minor thing, and therefore something easily overlooked or ignored, the motto of the University of Alabama’s Department of Religious Studies — “Studying Religion in Culture” — italicizes the preposition “in.” We do this to draw attention to the fact that the more common version of this popular phrase — “Religion and Culture” — employs the conjunction “and,” and along with it, a series of often undisclosed assumptions that we hope our students will learn to scrutinize on their way to becoming scholars of religion.

Associated with the work of such scholars as the German sociologist of religion, Max Weber and the Protestant theologian, Paul Tillich, the phrase “religion and culture” is generally used by scholars to name a field that studies the intersection of these two otherwise distinct domains. That is to say, religion and culture are assumed to be separate areas that may or may not interact with each other — the field known as “religion and culture” therefore names the intellectual pursuit of studying their interactions and influences upon one another.

Although it may strike some as a little too subtle, the preposition in “Studying Religion in Culture” signals important information.

Basic to this way of approaching the field is the widely shared assumption that the area of human practice known as “religion” is somehow removed or set apart from those historical influences that go by the name of “culture” (which includes such things as language, art, types of social organization, and custom). Upon further examining this assumption it often becomes evident that an even more basic assumption concerns the popular belief that the area we identify as “religion” is in fact the public, and therefore observable, expression of what is believed to be a prior, inner experience, feeling, or sentiment. “Religion,” then, is thought by many to name the public manifestations (such as texts, rituals, symbols, institutions, etc.) of an inner, personal experience. Because one cannot get inside other people’s heads — or so the argument goes — scholars of religion are therefore left with studying these public expressions, comparing them across cultures in search of the similarities and differences that may lead them to formulate a general theory of religion as a universal human phenomenon. “Religion and Culture,” then, names the field which takes as its data the shape adopted by what is presumably the inner essence of religion–a shape taken when it is not just experienced but also expressed in such historical settings as art, architecture, writing, behavior, etc.

Contrary to this approach, to study religion in culture means one is not beginning with the assumption that these two distinct domains periodically bump into each other. Instead, the preposition “in” signifies that the area of human behavior known as “religion” is assumed, from the outset, to be an element within human cultural systems–systems which are themselves historical products. An assumption basic to this approach is that the objects of study for any scholar in any branch of the human sciences are

assumed to be historical creations that had a beginning and that change over time. Whether these changes are random or governed by other factors — such as gender, economics, politics, cognition, or even geography and environmental features — is one of the areas that such scholars explore. To study religion in culture therefore means that ones object of study is a product of human belief, behavior and social systems.

Although it may strike some as a little too subtle, the preposition in “Studying Religion in Culture” signals important information. Unlike the conjunction “and” that functions grammatically to link two nouns, each of which names separate things (somewhat like that old saying concerning “apples and oranges”), the preposition “in” firmly places one item as a subsystem of the other. Whatever else religion may or may not be, in this publicly-funded Department it is therefore assumed to be an aspect of human cultural systems and thus something that can be studied using the same tools and methods that our peers employ throughout the rest of the university when they too study human behavior. And it is just this assumption that underlies the lecture series that goes by the same name: Religion in Culture Lecture Series.