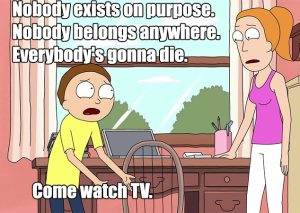 One question asked in this course is, “fake or real?” We find ways of asking it of the texts, ourselves, other people as well as the question itself! This Core Humanities course surveys the influential school of modern, Western religious thought called religious existentialism, reviewing major texts, authors, & themes of this eclectic movement, such as texts by Kierkegaard, Dostoevsky, Buber, Heidegger, de Beauvoir, Sartre, etc. HU

In this course, we will:

Books are available at the SUPe Store and online through vendors such as amazon.com.
Department of Religious Studies