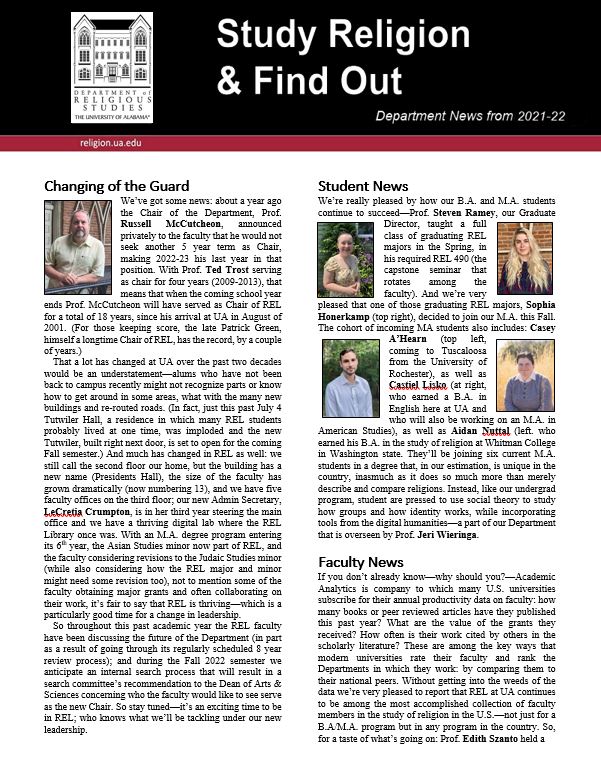 Yesterday I sent out our annual Department newsletter — it’s much smaller than it was 19 years ago, when we first started it. But back then the Department didn’t have a podcast or a Vimeo account where student-created content was regularly posted, let alone an Instagram account, so the newsletter was the main place where we could get some news out annually and represent the good work being done in the Department. So now, with frequent Facebook and Twitter updates, the newsletter plays a rather different role.

Among the various functions of yesterday’s update — such as announcing our incoming M.A. cohort and the interesting work being done by all of our faculty — was the chance to alert just our alums and current students as to an upcoming change in the Department. For in the late Spring of the 2021 semester, at my annual year-end meeting with the Dean of the College of Arts & Sciences (where the past year’s work in the Department is discussed, along with briefing him on future plans), I told the Dean that, at the conclusion of my current term as Department Chair (in August of 2023), I wouldn’t stand for another 5 year term. I figured that two years notice was fair, what with the last year being taken up with the process to search for a successor; and so, at that August’s annual Fall faculty retreat, where we get ready for a new school year, I let the faculty and staff in on the news, thereby giving us as a group a year to talk about where the Department has been and where it might be going and, in the midst of all that, to mull over who the faculty would like to recommend to the Dean as their next Chair.

And so, while working our way out of the pandemic and teaching and doing our own individual research and service to the university and the profession at large, this is what we’ve been doing for the past academic year — a process assisted by our university’s required 8 year review that we’ve been going through since the Fall of 2021, when the Department wrote and submitted a detailed self-study document, which served as the basis for a review team’s site visit in the Spring 2022 semester. (Our response to their report is due in early September and that’s work to tackle in a few weeks at this Fall’s faculty retreat.) And the Department was also working on another report, now that our M.A. is 5 years old, concerning the number of its graduates and thus, at least as we phrase it here in Alabama, the viability of that new graduate degree. (Yes, the behind-the-scenes life of a Department is rather busier than students or those on the outside might sometimes think — not terribly exotic, I know.) So, yes, 2021-22 was a busy and productive year.

The Dean has agreed that the search will be internal, and thus not open to outside applications; and so REL faculty have been considering whether they are interested in putting their hat in the ring while discussing what they each see as important about the Department and its future. If all goes well, I’d hope that the search takes place early in the Fall semester (as the outgoing Chair I have no role to play in selecting the search committee — this is all spelled out clearly in the UA Faculty Handbook, Appendix A section V) and that the incoming chair, who will begin work mid-August 2023, will be able to shadow me for the Spring semester’s activities.

As the newsletter makes clear, the Department has certainly changed over the past 22 years; Prof. Trost was chair from 2009-2013 and I was chair from 2001-2009 and then again from 2013 until now. When I arrived from southwest Missouri, UA was 19,000 students and REL had 4.25 faculty (two of whom were cross-appointed to other units) and only a handful of undergraduate majors and minors; So, since then, UA has doubled in size and REL, though its B.A. degree was nonviable back in 2001, has, with the investment of a lot of time and energy on the part of the faculty, staff, and students, had a number of tremendous successes — too many to itemize in a blog post. That’s why it struck me as the right time to make a change: when things are going well, so that someone else can take on the role with a lot of wind at their back and a lot of good will among their colleagues. Where that momentum will take us over the next two decades, and hopefully more, is kind’a exciting to think about, no?

So while I can be as nostalgic as the next person, reminiscing about REL 20 years ago is best left to another occasion. For now is simply the time to let more than just our own alums and current students know what’s been afoot in Presidents Hall for the past year and some of what we’re doing this Fall. And with the strong faculty that comprise my colleagues I’m pretty confident that UA’s REL program will keep playing a role in the field, both nationally and internationally — and, besides, I’m not retiring, but just getting ready to move my office and no longer be the one who makes class schedules each semester, decides how we pay our bills, carries the master key, and writes the year-end reports for the Dean.