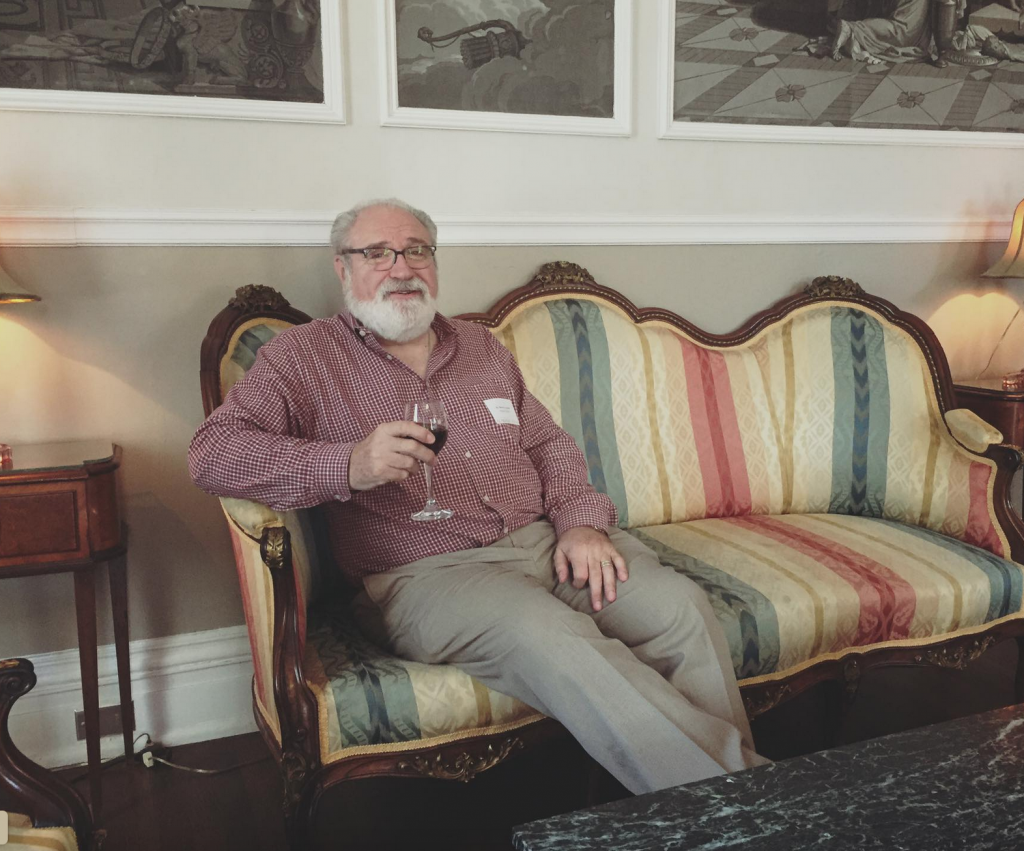 Prof. Steve Jacobs, above, in April of 2017 at the annual Arts & Science reception at the University Club, for newly promoted faculty — celebrating his promotion that year to Full Professor.

Since starting full-time at UA in 2001 (my “start date” is easy to remember: 1/1/01), past A&S Dean Robert Olin and current Dean Joseph Messina have accorded me three one-semester sabbatical research leaves to pursue avenues of research in my areas of academic specialization: the Holocaust of World War II, historical and contemporary genocides, and Judaic Studies. This work and the sustained opportunity to do so without teaching and/or committee responsibilities during my time away has resulted thus far in books, articles, and conference presentations and lectures. The third of these research sabbaticals is this Fall.

Currently, I am hard at work on two book projects, both under contract. The first, Religion and Genocide: Changing the Conversation (Routledge, due 31 January 2022), develops my thesis that “religion” — however we define it and understand it — is a participating factor (my preferred term) in all instances of both historical and contemporary genocides.  Two forthcoming book chapters, “The Religion Genocide Nexus” in the Cambridge World History of Genocide and “Holy Wars, Judaism, Violence, and Genocide: An Unholy Quadrinity” in the Routledge Handbook of Religion: Mass Atrocity and Genocide, both explore different aspects of this idea as well.

The second book project I’m be tackling this Fall is part of a series of “Short Histories” with Bloomsbury Academic in the UK (due 1 October 2022) and is entitled, A Short History of Judaism and the Jewish People; this book further expands this historical story, and is based on a single chapter in my previous textbook, The Jewish Experience: An Introduction to Jewish History and Jewish Life (Minneapolis: Fortress Press, 2010). Here I argue that you cannot fully tell this story and embrace the complicated history of the Jewish people without also telling the evolving story of the Jewish religious faith, heritage, and tradition.

So there’s no problem whatsoever keeping busy during my time away from teaching this coming semester.

By the way, I am also developing a book proposal for a new anthologized and, yes, uncomfortable collection tentatively entitled, The Texts of Hate: From the Bible to the Present Day; it will bring together significant excerpts from the “classical” antisemitic texts throughout history (there’ll be approximately 75 of them!), setting each of them in their own historical and literary contexts, along with providing a commentary.

So if you don’t see me as often in the Department this Fall you’ll know what I’m up to; but I’m already looking forward to being back in class, face-to-face, in the coming Spring semester.