By Nathan Loewen and Jackson Foster

Were it useful to find complimentary research from other (sub)fields, however, how might this be done across thousands of other, specialized publications?

Some excellent scholarship towards these kinds of questions already exists. Joel Katzav and Krist Vaesen’s 2017 article performs a close reading of The Philosophical Review, one of the most influential journals in the 20th-century, English-speaking world. Their method is to manually categorize and track changes in the journal’s contents. What they find is a shift during 1930 to 1950 from “philosophical pluralism” to the dominance of analytic philosophy.

None of this is news to scholars who have read work by Scott Soams, Cheryl Misak, Bruce Kuklik, and John McCumber. But Katzav and Vaesen’s insights are that philosophy in America was more methodologically plural than conventionally thought, and, that the tipping point was an opposition in the discourse of The Philosophical Review between speculative philosophy and critical philosophies. But this watershed was not so much based on differences of methodological rigor but institutionalized exclusion: “a premeditated, hostile takeover by key American and European players” (Katzav and Vaesen 2017, 788). We read this article as scholarship that challenges naturalized accounts of “how things happened.”

We find further inspiration in the research of Arianna Betti and Hein Van Den Berg, who propose “computational history of philosophy” as a branch of the digital humanities. The application of computational analysis methods is rare in religious studies (Cantwell and Rashid, 2015), atypical in philosophy (Spiro, 2013; Weinberg 2016) and non-existent in the philosophy of religion. Thus, we look to researchers like Betti and Van Den Berg as examples of the computational approach to the study of philosophical documents.

In “History of Philosophy in Ones and Zeroes,” Betti and Van Den Berg explain how they traced the intellectual development of the bigram ‘conceptual scheme,’ a key term in Quine’s philosophy. They set out to prove that conventional accounts about the provenance and history of ‘conceptual scheme’ are based on inadequately comprehensive studies of the bigram. While every historical account is a matter of interpretation, they show how basing the history of ideas on received knowledge may risk forgetfulness that naturalizes terms.

Betti and Van Den Berg use a 41,462 document corpus of journal articles to find 367 documents from eight journals containing ‘conceptual scheme,’ which manually analyze for two conditions they hold necessary for Quine’s understanding of the bigram. They manually derive a nine-field set of journal metadata and scholarly affiliation, too. Their findings are that 41 articles by Harvard-affiliated authors were forgotten by conventional scholarship. Furthermore, they demonstrate that the graduate students of Lawrence J. Henderson (1878-1942) form a group of “invisible Harvardians” that are important for understanding the provenance of the bigram (Betti et al 2019, 325).

These examples of critical scholarship are essential to our project. Our objective is to find where and how Anglo-American philosophy of religion scholarship is limited to a specific set of problems and topics. We wish to plausibly suggest ways and means to broaden the future of the field. For these reasons, we want use computational methods can scale-up the methods developed by the likes of Katzav, Vaesen, Betti, and Van Den Berg. Ideally, we hope to find methods that replicate or adapt their work in ways that may be managed by a two-person research team of one faculty member and one undergraduate.

Briefly put, here is how we are starting to approach our project of (data) mining futures for the philosophy of religion. With a large corpus of over 70,000 documents provided by JSTOR’s Data for Research, we use RStudio to:

Then, we initiate two other processes with these results:

A. Search for unique topics within each sub-corpus, and then,

And, B. Analyze the sub-corpora for their scholarly bigrams, and then,

Each of these processes is marked by our intervention as scholars to verify the content and context of the results generated. We understand our “data” as “hermeneutica,” things that might be useful to think about and interpret (Rockwell and Sinclair 2016, 8).

“Mining Futures for the Philosophy of Religion” adapts data mining methods to work with a corpus of over 80,000 documents from 21 leading journals of the past 100 years in religious studies, philosophy of religion and philosophy. (Unlike Gregory Crane, we don’t have to worry about what to do with millions of books!) We borrow methods from natural language processing and machine learning, to work around some of the human limits in resources (e.g. time, researchers, money) with the aim of testing orthodox accounts of topical emphases in philosophy of religion. We then compare those results with comparison corpora from philosophy and religious studies journals.

We adapt these methods in order to organize information that might help us answer some historical questions about the field: when, at what time(s), and through which scholarly relationships did analytic methods come to dominate Anglophone philosophy of religion? Did the field see any early 20th century influences of phenomenology, social sciences and critical theory? (e.g. why the Vienna rather than Frankfurt School?) Whither the outcomes of feminist scholarship in the late 1980s to 1990s? We hope that by computationally pursuing these questions, we might begin suggesting bridges with contemporary scholarship in other sub-fields of religious studies and philosophy.

The outputs from these processes requires evaluation and interpretation. For example, following Katzav and Vaesen’s finding that the analytic turn took place in 1950, we can model topics in the 1920-1950 documents of from The Philosophical Review. What we find was a distinct topic (below named “topic 2”) whose contents we interpret to exemplify the contents of an analytic approaches to philosophizing:

To make a very long story with roughly 200 lines of code shorter, we work in reverse through our modeling process with a method Jackson calls “Layered LDA.” The method allows us find the documents that contributed to any specific topic grouping (along the way, we also preserve a joined list of author first and last names for all our document metadata): 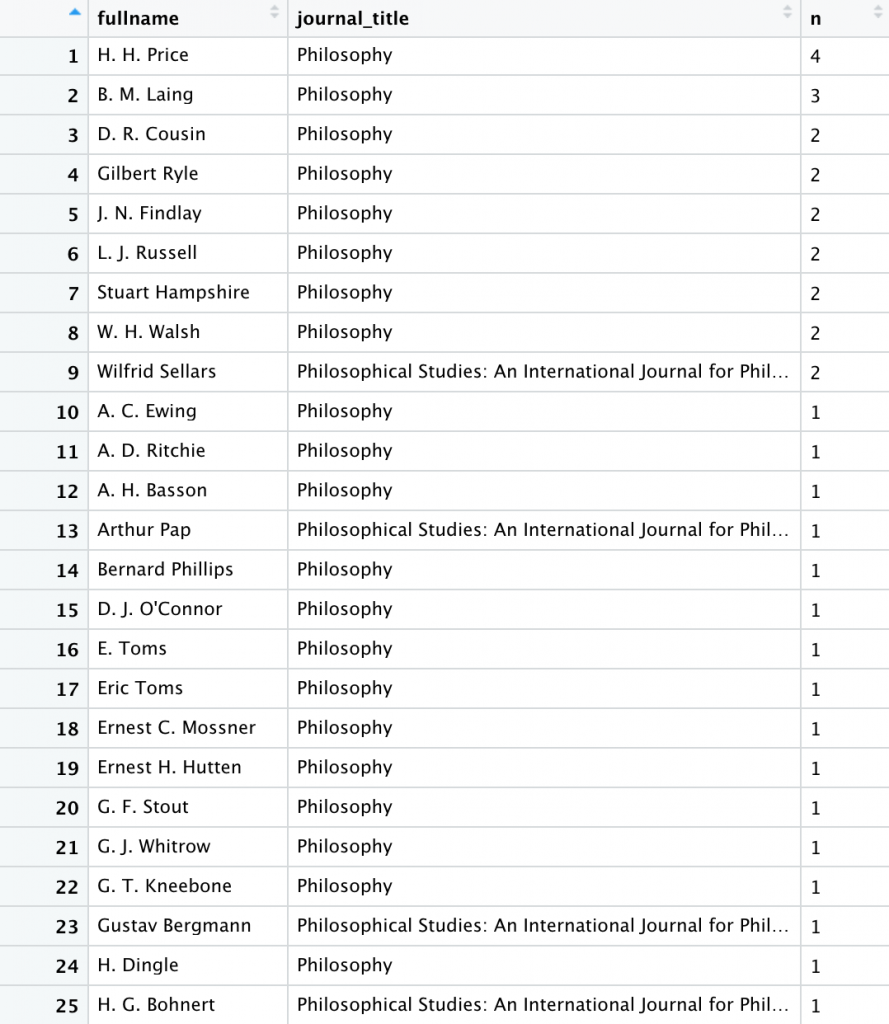 We then adapt Betti and van den Berg’s approach of using bigrams to locate intellectual influences. We analyze our sub-corpus from “Topic 2” for its bigrams, and then we interpret these bigrams to confirm our understanding that this sub-corpus does indeed represent some of the emerging authors influencing the development of analytic philosophy of religion: 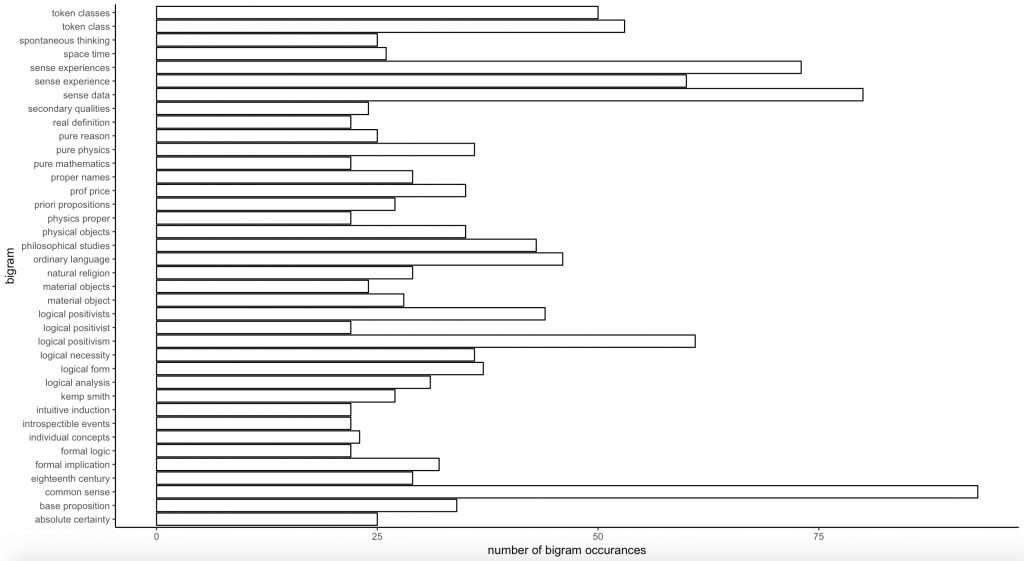 Using judgments based upon our combined field-specific expertise, we select the bigrams most representative of analytic methods (sense data, real definition, proper names, priori propositions, ordinary language, natural religion, logical necessity, common sense, base proposition). We then search through the entire 1920-1950 corpus for documents containing these bigrams. The result is a selection of articles from The Philosophical Review that we think are highly likely contributors to the emergent dominance of analytic philosophy in that journal. In addition to reading those articles to confirm our interpretation, we now have a method for deriving bigrams and their source articles that might we think is useful for our project. Also important is the question of resources: we read two scholarly articles and adapted their ideas towards a new series of computational processes to get some useful results over the course of roughly four hours (n.b. Loewen has spent the past year learning these methods in the R environment!). 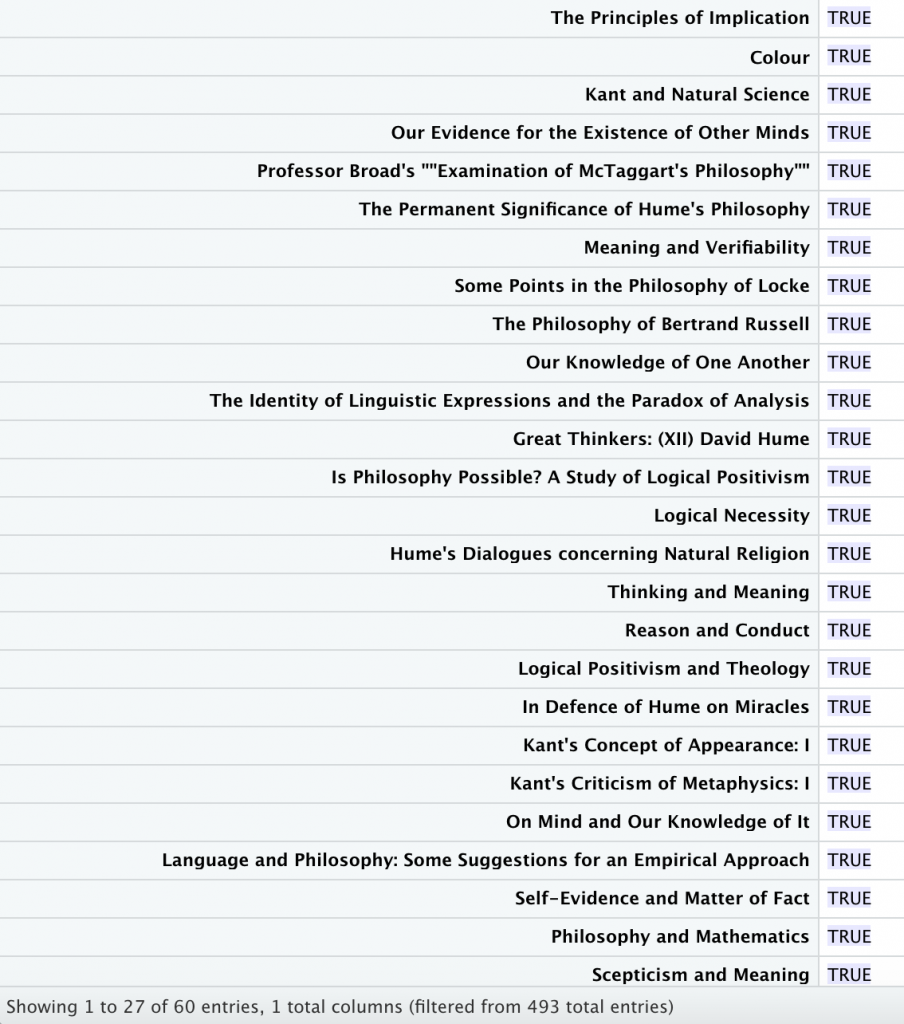