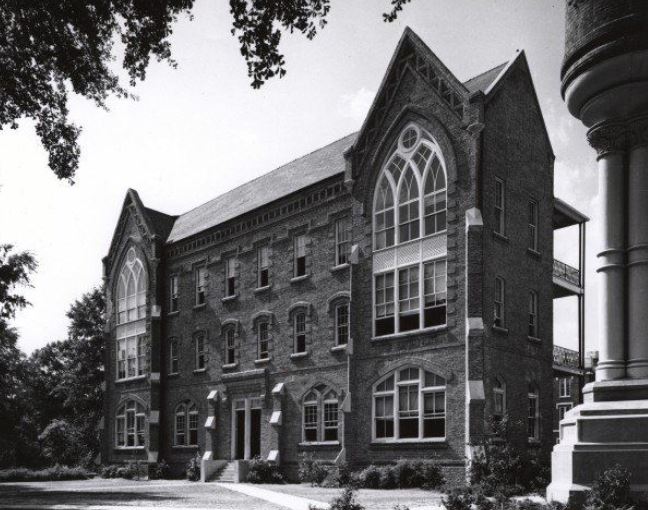 The following reminiscence about the Department’s history, written by the late Patrick Green, onetime Chair of REL, was commissioned for and printed in our Spring 2004 newsletter. It is re-posted here in its original form.

It began with a man on a motorcycle, smoking a cigar.

Joe Bettis, a recently minted Ph.D. from Princeton, was hired by the College of Arts and Sciences to start a Department of Religious Studies. It was1964, a few years after the Supreme Court had declared that teaching “about” religion was permissible in state supported universities. All across America, and especially in the South, state universities were quick to respond. Within a few years departments were started at the University of Florida, Florida State, Georgia, and Tennessee. Bettis and Leon Weinberger were appointed to the first inter-racial committee that Alabama had seen since Re-construction. The Ku Klux Klan was still very much a part of the local culture, and both men were targeted by that group as “liberal trouble makers.”

In 1969 the Department became at hree person operation with the hiring of Patrick Green. He arrived just a few months before the university-wide demonstration that next spring against the bombing of Cambodia and the killings at Kent State. All three members of the department were on the so-called Faculty Student Coalition, a group that at-tempted to negotiate a settlement with a recalcitrant, and decidedly backward, administration that timidly refused to talk with the students. But a settlement was not to be. After the longest running demonstration of its kind in the United States, the embarrassed administration declared an end to the academic year and sent the students home—with no final exams!

A year or so later the department hired Mr. Dorsey Blake, a Ph.D. candidate from Berkeley, who was one of the first black faculty members to be appointed by the University. (The basketball team had been “integrated” two years before and football was soon to follow.) His classes on “Black Religion” were immediately popular among both black and white students, but his efforts to visit various local churches with his class were not so successful. Two white churches turned the students away, telling them to go to their “own” church. However, after the story ran in the Tuscaloosa News, the group was welcomed by a number of other churches, including Calvary Baptist and First Methodist.

Joe Bettis left in 1973 to become an Associate Dean of the School of Public Affairs at the University of Nebraska. Green became Chair at that time and Joe McCowan was hired to teach Phenomenology of Religion and Ethics (which Bettis had taught). McCowan was also the first faculty member to teach a course oriented to Feminist Studies. Indeed the early ’70s saw a cultural shift in Religious Studies. While courses in Old and New Testament, the History of Western Religions and Comparative Religions continued to be offered, Black Religion, Feminist Thought, Revolutionary Theology and the first early forays into Deconstruction were making a place for themselves.

The ’70s generally saw several educational innovations. A “free university” offered courses for a couple of years with Bettis and Green participating. Green was on the founding committee for New College and taught courses there for several years. Green and Emmett Parker, a Professor in French literature, de-signed the first Humanities course for the College of Arts and Sciences with a grant from the National Endowment for the Humanities.

After McCowan took an early retirement in the late ’70s his position was lost to “proration,” a drastic reduction in the state budget, which of  course directly affected the university. Indeed, “Alabama” and “proration” would come to seem synonymous. These were some very lean years for the department. There was virtually no hope of adding faculty even though student demand for classes remained high. Increasingly the department came to rely on part-time instructors. Sam Haun, Barbara Jamestone, and more recently, Jon Berry and Ana Schuber were among those who served with dedication and distinction. William Doty was hired in 1981. He brought with him a vast erudition, an incredible work ethic, a love for his students, and an ability to be at home in a number of  disciplines.

While Doty would have his hand in an incredibly large number of  projects during his tenure at the university, his latest—aiding and abetting the inauguration of  the Blount Under-graduate Initiative—was perhaps among his finest. He would Chair the Department from 1983 to 1988 and again in 2000 when Green retired. He would himself retire in 2001.

While there are still budgetary concerns in the department and the university, there have been some exciting recent developments. We have established an endowed Chair in Judaic Studies. The Provost’s office, to the department’s surprise, saw fit to fund the appointment of a faculty member in Asian Religions. And when Leon Weinberger retired in 1998, we were able to hire both Ted Trost and his wife Catherine Roach, who held joint appointments in the department and New College.

Even more recently Steve Jacobs came to fill the Chair in Judaic Studies, while Kurtis Schaeffer came from Harvard in Asian Religions.

One thing has remained consistently true. The department has always and continues to attract some of the very best and brightest students on the cam-pus. They have been an exuberant presence who of-ten taught as much as they learned and who never failed to support this odd, if feisty, department.

With Doty’s retirement the “old guard” was gone. Russell McCutcheon became the Chair and the department was, in effect, brand new. It is now a young and vigorous faculty that faces the future with a great deal of optimism. The “old guard,” who had a hell of a ride, wish them well.