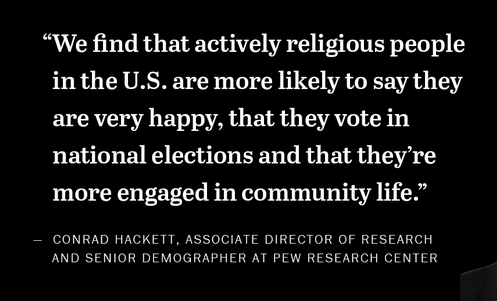 In a post the other day I discussed some of the problems with the recent Pew study on the apparent correlation between religiosity (understood as church attendance) and happiness.

Well, as a brief follow-up, consider this Feb 8 post by one of the researcher’s involved in this work. Here we find, in the opening graphic (reproduced above), a voice that makes plain that the research subjects reported feeling happy; yet this voice changes considerably in the post’s opening paragraph where it is phrased as follows:

We have here a wonderful example of the manner in which self-reports sometimes slide into statements of fact (so long as the researcher does not find those reports to be controversial, I assume…), as if the distance between reporting feeling happy and actually being happy is negligible. For we very quickly went from “actively religious people … are more likely to say they are very happy” to flatly stating that they “are more likely to be happy.” The difference between these two is significant, to me, and it’s a great shame that a claim is confused with an actual state of being, as if one claiming to be more patriotic actually makes one more patriotic or claiming to feel healthy is the same as being healthy…

I happen to think that we can produce much better scholarship on religion if we introduced a little precision into our work — the sort that’s probably presumed in almost all other fields that study human behavior.