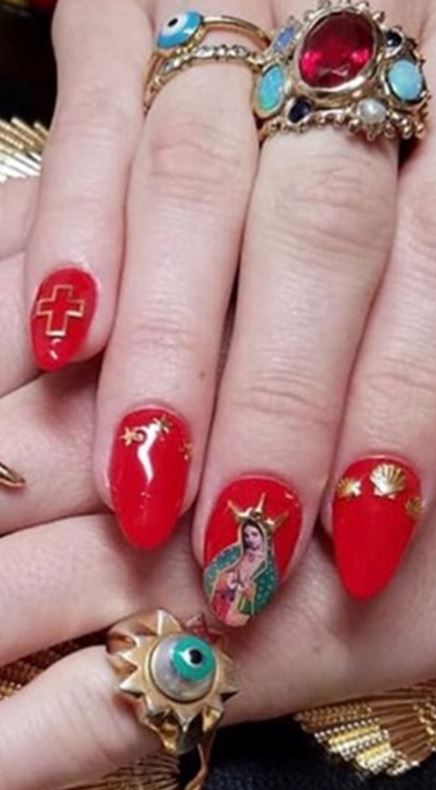 Sierra Lawson, an MA student in the Department of Religious Studies, led our most recent journal group and has some reflections on the reading, Learn more about her work here.

In the Religion in Culture M.A. program, our monthly journal group has created a space in which graduate students can engage with faculty, beyond just their advisor, regarding their individual interests–interests that, ideally, will be reflected in their eventual thesis. While my focus on the Virgin of Guadalupe and her devotees in the rural Southeastern United States has remained constant throughout the course of my studies, my methods in studying her have evolved considerably. While searching for an article for the group to read next, I realized that if I chose it carefully it could potentially showcase a particular lacuna in the field that my work hopes to fill.

As a result, the article I selected was less of an article and more of a crash course in contemporary approaches to studying Marian apparitions. Published in Religious Studies Review 43/3 (2017), it collected the brief presentations by American scholars in the humanities, at an exploratory session from the 2015 annual meeting for the American Academy of Religion. The eight scholars included ranged from late to early career and demonstrated a breadth of interests based in the academic study of religion as well as sociology and philosophy. The panel addressed concerns these scholars have regarding methodological approaches to Marian apparitions and, particularly, ephemera associated with them.

For example, Dr. J Gordon Melton, of Baylor University (well known in the study of new religious movements), is concerned with aspects of Marian apparitions that, he believes, often go overlooked. According to Melton, many apparitions are “unheralded, as they remain purely local affairs” (p. 212).  “How are they judged?” Dr. Melton asks, going on to address how the temporal interests of the Catholic Church often condition appearances of Mary. This question, one that nearly begs for standardized methods in studying apparitional culture, makes evident the sheer breadth of approaches to studying these phenomena.

Another participant, Dr. Sandra Zimdars-Swartz (University of Kansas), “emphasize[d] the importance of kitsch” (p. 208) in a similar fashion to Melton. From her perspective, scholars too often overlook much of the materials in apparitional culture because such items do not—at least as these scholars see them–embody the essential characteristics that we have come to associate with religious objects. For example, she uses the example of how a keychain and plastic bottle do not fit into the framework that scholars have standardized when they look at such religious ephemera, yet, she argues, the two items are invaluable representations of the material economy in which a particular apparition occurred.

While recovering previously overlooked data seems, to me, to be a worthwhile endeavor, I am curious as to why Zimdars-Swartz goes on to describe these materials as the result of “rather eclectic and one might even say uncritical” decisions made by contemporary devotees (p. 209). If her aim was to recover previously ignored data then why does she describe them in terms that could be read to reinforce the judgment that they’re of lesser importance than other items—as if the way people signify certain other cultural objects were somehow not eclectic themselves or carried out in rather unself-conscious manners. Or consider “kitsch,” a term she herself uses to designate these recovered objects; it is not a neutral descriptor yet it reads here as if it were an innocuous term. Despite that, in using “kitsch,” Zimdars-Swartz seems to reaffirm the hierarchy of so-called religious ephemera that she otherwise critiques for its exclusivity.

Take, for example, the photo at the opening of this post.  Would this manicure qualify as “kitsch,” or, instead, would it be better described as, say, devotional art or maybe even iconography? Or, better put, for whom would it be which? When? Where? In what situation does it become one or another? Given many scholars’ efforts not to silence the participants themselves—evident in several of the papers that resulted form this panel, where scholars worry about how too much theory can obscure what we’re studying—I wonder what the people involved in these acts and groups would think of this designation.

The very existence of these divergent (possibly competing or maybe even contradictory) classifications demonstrates that there are interests that go in to naming and that something is therefore at stake in the exclusion of certain datum when it is named in certain ways. So, for those scholars who call for including what’s been overlooked, I’d suggest that the problem here is not overlooking so much as redefining, for they’ve come to their work with a different understanding of what counts as worthwhile. But, in doing so, there’s an irony: they may sometimes reinstate the very hierarchies they claim to be undermining; for the decision not to include that great nail job among what we term “the art” in, let’s say, the Vatican (which I’m pretty sure we wouldn’t term “kitsch”) tells us much about the observer’s scale of values and likely says little about the objects themselves.