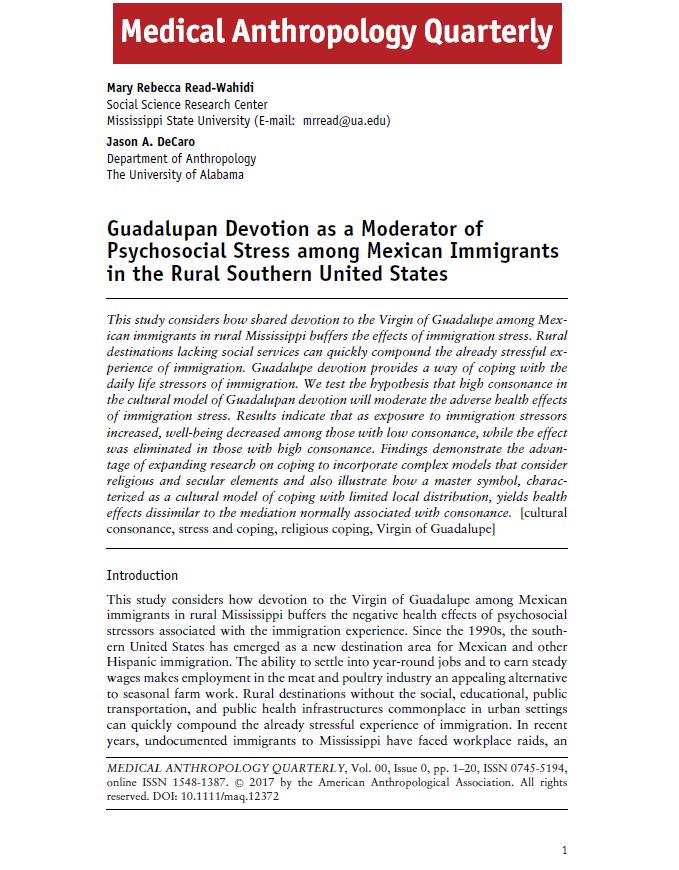 The following exchange between Prof. Russell McCutcheon and Sierra Lawson, a graduate student in our MA program, reflects on the recent meeting of REL’s monthly journal reading group, part of our Religion in Culture MA.

Russell: Sierra, in your undergrad here at UA you did a double major in Anthropology and Religious Studies, and I know that you have an interest in medical anthropology. So presumably that helped direct your choice of this article for our journal group (written by our UA colleague, Jason DeCaro, a faculty member here in the Department of Anthropology) and one of their recent doctoral grads, Becky Read-Wahidi)?

Sierra: Yes! I attended the University of Alabama, starting in the Fall of 2014, under the assumption that I would study biological/physical anthropology. While this has morphed a great deal, leading to my current interests, the issue of health and wel-lbeing has consistently been of interest to me. So this article seemed to be a good fit for the reading group because it dealt with religious behavior — but not from a traditional Religious Studies point of view. This is what I thought made it an accessible example for our Department to wrestle with broader issues regarding how something called ‘religion’ is conceived and studied by other departments in their research.

RM: During the discussion I recall a few times when disciplinary issues were on the table, such as people asking you some questions about how Anthropology might understand this or that topic or use this or that method — so, are there points of overlap between the two fields that you now see, or maybe points of divergence that catch your attention?

SL: While both fields do look at cultural phenomena and human behavior, the means to these ends can be divergent. For example, in Anthropology, the perspective of the individuals being observed is often awarded more authority than in scholarship on religion. The increasing attention paid to the politics of classification in the field of Religious Studies — or at least here at UA — is probably among the reasons why some scholars of religion can be hesitant to take subjective accounts as entirely truthful or authoritative. Meanwhile, participant-observation has long been the standard for method for anthropologists in their fieldwork, and to a certain extent it is a tactic that requires anthropologists to engage with the emic perspective, as though it conveys real experiences and conceptions of reality. In Religious Studies there are certainly scholars who think taking religion ‘seriously’ means engaging with it on individual levels in a similar manner, although I would say that there are also departments that find this to be rather problematic.

RM: With that in mind, the article seems rather interested in what it calls a group’s “emic cultural logic” (and the degree of each member’s acquaintance with it), that is, as you say, seeing things from the participant’s perspective. Perhaps that’s why people’s self-reports of their health are recorded by the authors. But then I have to ask: are we studying “perceived” health benefits by means of this approach or actual health benefits? And is there even a difference?

SL: This is the very issue I was attempting to get at in the prior response. Because the article’s data relies on self-reporting, due to the barriers or challenges that often come with studying marginalized (and to some extent, endangered) groups (given that the paper is on immigrant workers in Mississippi), I would say that the article seems to be studying their informants “perceived” health benefits, whether it states this explicitly or not. The difference, to me, between understanding your data as representative of health instead of perceived health is that it may qualify the research beyond its limits. That is to say, when scholars do not make it obvious that they are receiving data in direct responses from their informant it may mystify the fact that these reports of ‘health’ are not derived from physiological testing and, thus, are possibly subjective and not simply empirically based.

RM: Good point — and that’s something for us to chase down with the authors, to see what they think, given that one is just down the road and the other teaches online for REL.