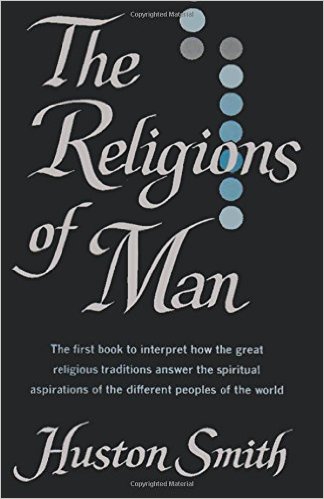 To fail to recognize him as a hugely influential of the work many of us carried out in our field, throughout much of the 20th century, would be a tremendous oversight. The Religions of Man, his still-in-print 1958 book (created alongside a public television series broadcast back then), using the plural “religions” (in contrast to Tagore’s similar 1931 title, drawing from his Hibbert Lectures from the year before — though both were probably just as interested in the so-called big, universal themes that some think we find when we study religion), was (and for many still is) the book of choice for their world religions intro course. Come to think of it, I can’t imagine how many students, from several generations, cut their teeth on the field by means of this one book — that alone makes Huston Smith’s work worth taking very seriously.

In fact, this was the book that I was told to use the first year I began teaching, as a full time instructor, at the University of Tennessee, back in 1993. Given that I’d been a TA in a world religions course at the University of Toronto that ended up producing it’s own textbook (now in a newer edition), I wasn’t as yet all that familiar with Smith’s book, which some time before had dropped the gender-exclusive title (though large parts of it were, and presumably still are, taken directly from the first edition).

Like a lot of people who start out teaching in a university, I was writing the final few chapters of my dissertation at the same time and if you find references to Huston Smith in what became the published version of that dissertation it’s thanks to being required to use (and thus read and teach) that book in Knoxville, for that’s the reason it came to my attention and thus the reason why I found what I took then (and still take) as a terribly dated representation of the field. While it may have been cutting edge around the time that I was born, by the early 1990s, let alone today, it read to me as a historic artifact, from an earlier time — notably from the era of the cold war.

I won’t repeat here the critique I offered in my first book, but, with the reported news of his death in mind, what I think is worth reflecting on is what it takes for advances to happen in our field — and thus, what gets to count as an advance.

For the continued popularity of an almost 60 year old book in what is probably still our field’s main “gateway course” should, I’d argue, cause us to stop and think a little about our field — what it was, what it now is, and where it might be going. For not many field’s still use a textbook from a decade ago, let alone six. For example, though not everyone has to agree with, say, the now well-articulated critique of the discourse on world religions (now called the world religions paradigm by many), it’s a least worth taking note of, no? But, regardless which book they use, the intro course is, for many, still a descriptive and comparative survey of the so-called great religions, with new ones perhaps added as per the happenstance interests of the instructor. That this entire way of arranging the material of our field — and thus the once dominant rationale of the field — has been drawn into question therefore remains mostly or even completely unrecognized in such courses and, I’d argue, many undergraduate curricula.

So with the unfortunate news reported online of Smith’s passing, at such an impressive age, I wonder if it’s time for the rest of us to begin (or, for some, to continue) a discussion on why and how it is that we, as scholars of religion, do what we do — and why a book produced so long ago, and which was indeed so important in its time, still strikes so many as relevant and useful today. For that book undoubtedly helped to change the field 60 years ago, but it’s been changing plenty since then as well.