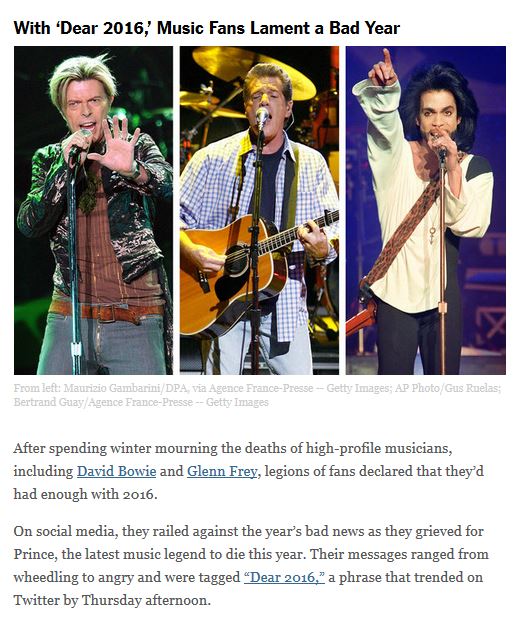 As the year comes to a close, and while we await the usual roll call of those famous people who died during the past year, I find it curious how 2016 seems to stand out for so many as being a particularly bad year — hence the #Dear2016 hastag.

#Dear2016
Thank you for not killing #KirkDouglas, but instead help him live to 100 years old! 😀 pic.twitter.com/yldpIBnwRL

Perhaps these deaths stand out because of a variety of geo-political things that were also happening this year — from the ongoing war in Syria to record numbers of refugee and migrant deaths, Brexit, and even the US Presidential election.

Or maybe it’s because you’re a George Michael fan.

I don’t wish to be flippant here — but all depending which way you voted in, say, the US election, it might have actually been a pretty good year for you.

In other words, the ease with which there now seems to be a consensus around how terrible 2016 was tells us much about the social media generation, I think. For after all, a lot of things happen every year and a lot of people die every year — celebrities included.

Or consider that, all depending who you asked, 1959 was a pretty bad year as well, at least in US pop music, given that it was the year the music died. 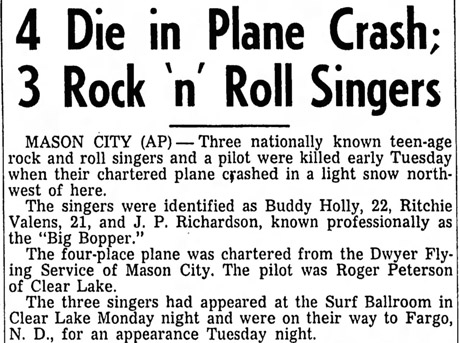 “1992 is not a year on which I shall look back with undiluted pleasure. In the words of one of my more sympathetic correspondents, it has turned out to be an Annus Horribilis….”

But this preoccupation with 2016, as I said, tells us something about a new generation, one that takes social media for granted, and how, I’d argue, they are now coming to terms with mortality, and doing it in a very public way. For 1959’s tragedy is ancient history to most of us now, inasmuch as it didn’t trouble our generational landmarks. (And who even knows what that Don McLean song is all about anyway.)  But Prince…? Bowie…? That’s starting to strike a little close to home — at least for the baby boomers and all those who, because of the boomers’ demographic and therefore economic dominance, were forced to grow up listening to their music on the radio, in malls, and in commercials.

To be sure, I can identify with these loses. But that tells you more about me than anything else. So don’t think claims about 2016 as a horrible year tell us about the year or the tragedies it contained (even calling events tragedies is not insignificant); instead, as pointed out in lots of posts on this site, it tells us all about those who are doing the tallying and the vastly accessible medium in which that count is now taking place.

If so, then I’m making the first prediction of 2017: it’ll be even worse. And so will 2018. And so on, and so on — for though each will probably claim the usual number of people, those people will themselves be claimed by ever new generations, posting their shock on social media, where we now seem to come to terms with the fact that people come and people go, not always pleasantly.  And they will each judge these years as the worst ever — since they were likely not paying much attention to last year’s loses. And for those as yet unimagined future generations, the likes of Gene Wilder, Leonard Cohen, and Sharon Jones will be as significant as…, well, as all those others who we’ve likely now all but forgotten but whose contributions and unexpected demise marked the passing of time for our parents, our grandparents, etc., etc.

For, in a reference only the boomers will get, “every generation throws a hero up the pop charts…”