I could go on, but we may never know.

What we do know is that within the past week, we haven’t been able to check social or traditional media without news of the latest deaths and the paralyzing fear and sadness that comes with it. We do know that this past week has been particularly awful. Yet the shooting in Orlando was less than a month ago and it doesn’t feel as fresh in our minds as it should. We know that killings after killings after killings have transformed America into a nation in a constant state of mourning and grief.

And we know that it constantly feels as if we are stuck somewhere between anger and denial.

We do know hatred and fear are powerful forces that all too often lead to a loss of life. These feelings — anger, hatred, fear, denial — come from these horrific events and can all too often lead to further violence. But these feelings that lead so many to violence also come from somewhere else — from regular reinforcement of stereotypes that lead to further fear and hatred. Most people do not hear and see these events and turn to violence. Most will post something on social media and some of those will put pen to paper and express their thoughts.

A blog post recently making its way through my Facebook friends called “If You Are White”; it asks the reader to imagine that someone they love is the man being shot and killed in the video of Alton Sterling’s death. It is a powerful visualization. The most heartbreaking thing about it is that the families and friends of all of these people who have lost their lives recently — the police officers in Dallas, Alton Sterling, Philando Castile, the 49 people in the Pulse nightclub in Orlando– will now suffer their grief while the nation tries to make sense of it.

There is no sense to make of it though. The only explanation is this: people motivated by fear and hatred took possession of deadly weapons and killed those that they feared and hated. These situations are so dangerous and deadly partly because the classifications are incredibly broad — police officers, blacks, LGBTQ+… These aspects of identity are just one piece of the puzzle that makes up these people’s lives. Yet in the public eye, police officers and blacks have been positioned as if directly posed against one another. Of course, there are some who try to combat this dichotomy by showing how the police and people participating in the Black Lives Matter protest were posing together for pictures and generally having a good time together before the shooting 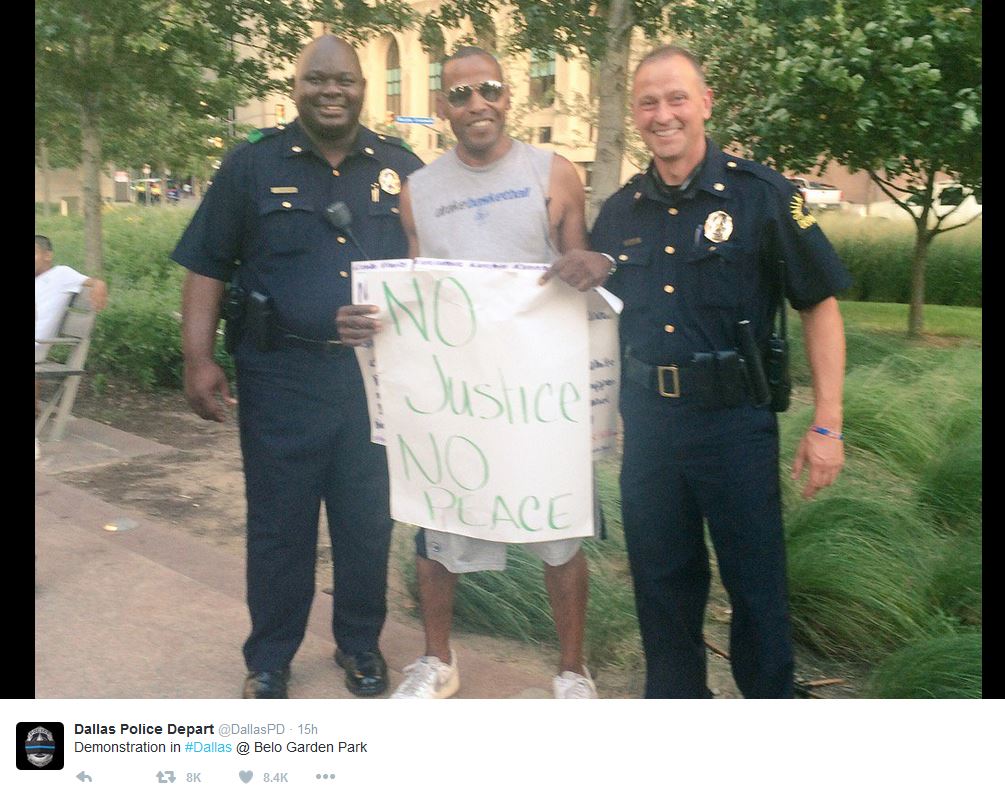 began in Dallas last night. Yet as the night wore on, videos of police increasing their perimeter and asking bystanders to step back were riddled with people shouting, “fuck the police,” helping to reinforce the dichotomy of black versus police officer identities.

The photo that opened this post (from a photographer at The Dallas Morning News) has quickly become one of the iconic images of the shooting in Dallas last night. By showing a black police officer mourning the loss of his brothers, it frames the intersectionality of being black and a police officer as one of the most difficult identities to possess in the wake of this past week. It’s easy to say that the dichotomy of black versus police is a false one, but dichotomies are rarely false. Rather, they are always more complex than presented. The issue is not black versus police, but rather racism as an incredibly complex beast in our era. We no longer have Jim Crow to point to as unjust and so police brutality is pointed to because it is the most deadly. But police brutality is just the surface of the horror that black people experience in this country. And now the police have been made victims as well.