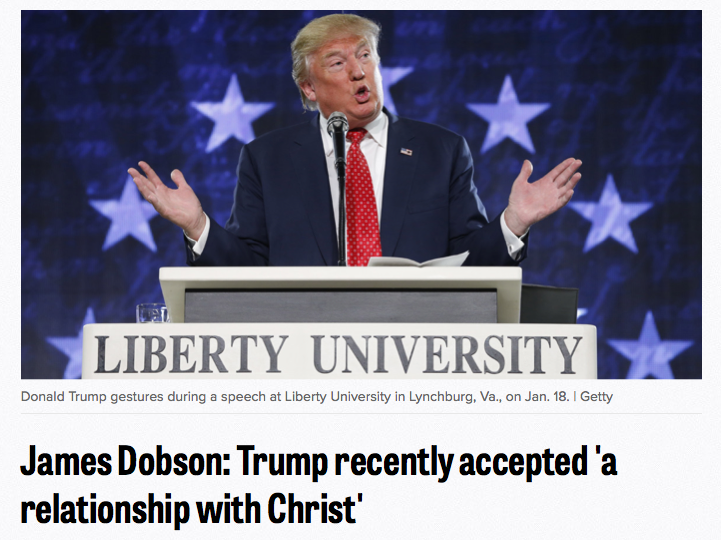 I’ve noticed an interesting reaction online to the news that Trump may have become born-again Christian — at least as reported recently in an interview with the noted US evangelical leader James Dobson.

The reaction concerns either how social actors like Dobson have stooped to a new low by so crassly using faith for political purposes (and thereby trying to make Trump more palatable to a segment of voters) or how this signals the final demise of the so-called Christian Right and any religious relevance it might have once had.

What I find so interesting about these reactions is that in the midst of seeming to be a progressive critique they reinstate a rather traditional argument. For if we instead saw the apparent difference between faith and action as a purely rhetorical distinction, invoked by social actors to legitimize certain ways of acting and organizing, we’d assume that all along the rhetoric of faith was a strategic form of political praxis — whether used by so-called Reformers several centuries ago in their fight with the once dominant institution known as the Roman Catholic Church or today by political activists of any stripe. If that was our starting point then there would be nothing new happening with Dobson’s claims about Trump’s new-found faith — whether it works or not would be the only question worth pursuing.

But instead, the critique of insincerity or the critique of using faith for political gain reinscribes the presumption that there actually is some authentic or purely religious domain that one ought not to use for practical advantage — and voila, it’s the same rhetorical move that someone like Dobson is trying to use for his own gain. It’s just that it’s now being used to authorize a rather different set of practical interests.

So the next time you hear someone talk on Dobson’s claim, think back to the sort of shift someone like my colleague Mike Altman recently recommended that we make, when it comes to how we think about what’s going on right now in US politics, and ask whether there’s a different way to approach all this — one that doesn’t presume there’s a uniquely apolitical realm tucked inside each of us that ought to float free of the messy world of history.

1 thought on “Make a Shift”